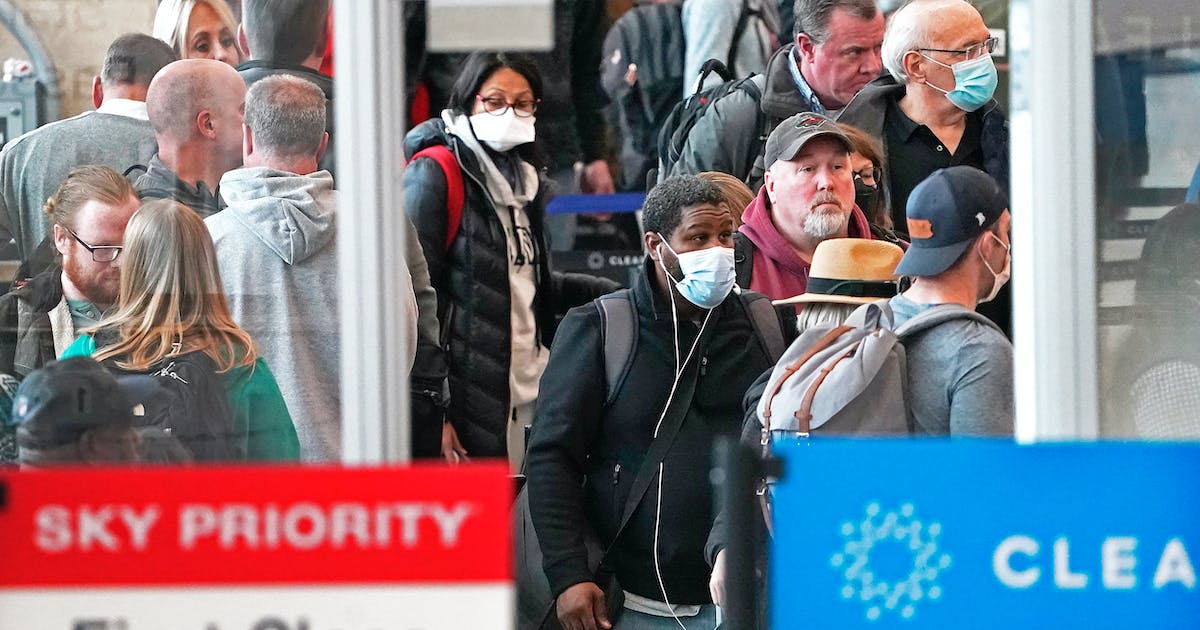 The sea of travelers at Minneapolis-St. Paul International Airport included many bare faces Tuesday, the first full day after the lifting of a federal mask requirement on public transportation.

But many travelers still chose to keep their noses and mouths covered, as recommended by the Centers for Disease Control and Prevention to stop the spread of COVID-19.

Dixie Ford stood with a roller bag as she and her husband waited for a ride near baggage claim, an expression of relief on her face. She said she had a much more comfortable experience flying without a mask and looked forward to flying mask-free on an international flight soon.

“We’re flying to Switzerland in a couple weeks to see our son and we’re excited. It’s time. I did what they said … but I’m over it,” said Ford, of Aberdeen, S.D. “I think you should be able to have your choice.”

A federal judge in Florida struck down the federal mask requirement on airplanes, trains, buses and other public transportation Monday, less than a week after the CDC had extended it through May 3.

The ruling opened the way for airports, mass transit systems, airlines and ride-hailing services to either keep mask rules or ditch them entirely, resulting in rules that vary by city and mode of transportation. It created a confusing patchwork of rules for passengers as they navigated airports and transit systems.

Some travelers were still unsure of the rules at the airport Tuesday and others seemed indecisive, wearing masks in a haphazard manner that didn’t keep their noses or mouths covered at all times. Not all airport signage was up to date; signs in some places still instructed terminal visitors that masks were required.

On the airport floor, two masked employees held brooms and chatted about the court ruling. “I’m not letting a judge overrule the CDC,” one said.

Officials at the Metropolitan Airports Commission worked Tuesday to get the mask-optional message to travelers, spokesman Jeff Lea said. They were removing signs, including decals on the floor, tabletops and chairs, and making announcements.

Staff members witnessed a mixed response, some people who felt safer wearing their masks and others who went without, Lea said.

“Things have been very smooth,” Lea said, adding that he expected to continue to see the change ripple through travelers throughout the week.

Nationwide, travelers reacted in various ways; one video showed some passengers on a Delta Air Lines flight cheering and applauding upon hearing the news that they were now optional. One man could be seen happily twirling his mask on his finger.

Sneha Kharya, who flew home to the Twin Cities from Kharagpur, India, wore her black mask outdoors as she waited for an Uber at MSP.

She said she “definitely” plans to continue wearing masks on transit. “I wear it for safety when it’s too crowded,” she said.

The national mask rule for travelers was one of the last pandemic restrictions still in place. Some still see it as crucial to protecting people while to others it was an unnecessary inconvenience or even government overkill. Some flight attendants found themselves cursed at and even attacked by passengers who refused to comply.

While airline and mass transit passengers around the country were ditching masks, the White House made clear that those traveling with President Joe Biden to New Hampshire on Tuesday would be required to keep face coverings on “in line with CDC guidance.” A Biden administration official also said there were no changes expected to the pre-departure testing requirement for international passengers bound for the United States.

Asked Tuesday if people should still wear masks on planes, Biden replied: “That’s up to them.”

Both Uber and Lyft announced on their websites Tuesday that masks will now be optional while riding or driving.

Both companies are no longer requiring people to sit in the back seat, but Uber said “to give drivers space, we ask that riders only use the front seat if it’s required because of the size of their group.”

Waiting for an Uber ride at MSP, Jonah Rufino had no idea the mandate had been revoked. “It’s gone? I did not know that,” she said. “I’m still going to keep my mask on, because it’s just not in my comfort zone yet to take it off knowing it’s still around and a lot of people continue to get sick.”

Rufino said she would still ride the Uber if her driver chose not to wear a mask.

“As long as I’m wearing a mask and I’m far away from him and he doesn’t come in my space, then honestly that’s OK,” Rufino said.

Although some digital signs still advised riders to wear masks, Metro Transit also no longer requires it. Staff were working on removing face mask requirement messaging on buses and trains, according to a spokesman. Officials cautioned riders to not use public transit if they are ill.

Stefan Wenc of Minneapolis donned a black mask as he waited for a light-rail train at Fort Snelling on his way to pick up an order from IKEA.

“I’m not huge on that [the mandate] being removed,” he said. “I prefer they be kept. It’s a relatively small thing that I feel like just keeps people safe. But it is what it is. I’m going to keep wearing mine and deal with it.”

“I’m also particularly sensitive to it because I’ve lived with an immunocompromised person, so there’s that extra layer of, if anyone in my circle gets sick it’s going to be really problematic even if it’s one of those variants that is, in theory, supposed to be less likely to be severe for most people,” he said.