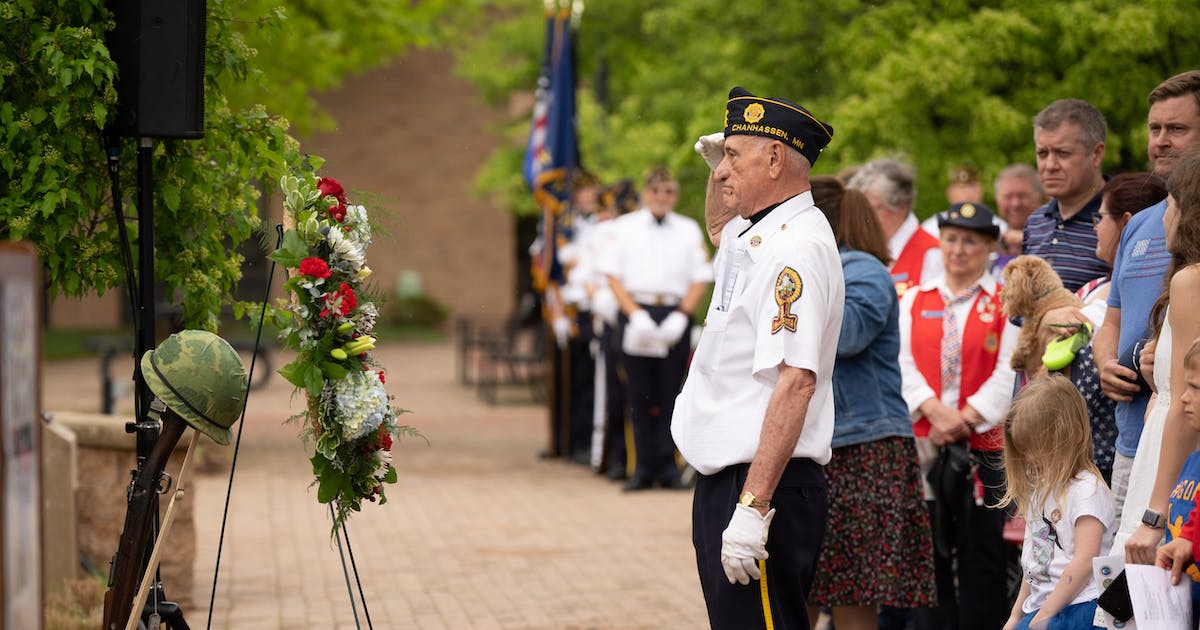 After a barely there spring, Minnesotans didn’t let a steamy Memorial Day with a dicey forecast keep them from stepping into summer.

Neyshia Moreno of Minneapolis got to Como Park in St. Paul by 9:30 a.m. to claim a grill and start piling three picnic tables with salad, treats, rolls and bottled water for the anticipated arrival of 20 family members.

Moreno, her five kids and extended family were eager to resume their start-of-summer tradition because for the past two years, she said, the family had skipped picnics and gatherings because of COVID-19 concerns.

“We’re hoping it can hold,” she said of the weather as a few light raindrops fell. “Honestly, I don’t think rain’s going to stop anybody from being out here on Memorial Day, and it might make it more fun for the kids especially with this humidity.”

At midmorning, the humidity, like the temperature, was in the mid-70s and expected to climb. The grass and the streets were still wet from early thunderstorms that brought spurts of rain, claps of thunder and flashes of lightning throughout the Twin Cities.

The National Weather Service forecast a partly cloudy day with storms expected by late afternoon. And the weather wasn’t the only thing unpredictable on Monday as Delta Airlines, the Twin Cities’ dominant carrier, struggled to manage the start of the summer travel season with a large number of canceled flights.

Down the road from Como Park, cars had begun flowing into the State Fair parking lot for the fourth and final day of the second annual Kickoff to Summer event, a sample-sized preview of the annual end-of-summer tradition.

Driving in from Plymouth, Melanie Jacobson said she had the windshield wipers on for the light rain and she pondered staying home but decided to take a chance on a few hours of sunshine. “I just thought the weather might get better so who knows,” she said, looking westward at skies that were gray and foreboding.

“I’m happy to be here. It’s a short visit, but I’m a State Fair regular,” she said. Jacobson, who planned to check out the merchandise vendors and music and seek out deep fried cheese curds, was eager to get back to normal after the past couple of years.

“It didn’t look like such a great day, but right now the sun is peeking out so you’ve got to have some hope and promise,” she said. The clouds did indeed clear throughout the early afternoon, revealing a bright, strong sun.

Delta’s struggles made the skies not-so-friendly for other reasons.

Kyle Potter, executive editor of Minneapolis-based Thrifty Traveler, pointed out Delta Airlines’ weekend meltdown on social media. Since Friday, the airline had canceled about 715 flights. To compare, from May through August of 2019, the summer before the pandemic, Delta canceled 738 flights, he pointed out.

“Memorial Day weekend is the start of the summer travel season. My fear is it’s going to be like this all summer,” Potter said in an interview.

Fliers are flocking back to the skies, pushing air travel at pre-pandemic levels, but the airlines shrank in the past two years and can’t accommodate those numbers, Potter said.

“When things go wrong, the wheels completely fall off and that’s what we’re seeing this weekend with Delta,” he said.

All the airlines, including Delta, need to shrink schedules to accommodate the smaller staff and give themselves more wiggle room for weather problems or crew illness, he said.

“For Delta, I hope this was a wake-up call and they need to make sure they aren’t over-extending themselves,” Potter said.

“More than any time in our history, the various factors currently impacting our operation — weather and air traffic control, vendor staffing, increased COVID case rates contributing to higher-than-planned unschedule absences in some work groups — are resulting in an operation that isn’t consistently up to the standards Delta has set for the industry in recent years,” Ausband’s statement said.

Even those who weren’t travelling by air had to embrace the holiday weekend uncertainty.

With their 18-month-old daughter Evie in her stroller, Luke and Hailey Peterson of Vadnais Heights were sanguine about the skies as they rolled up to the Fair. “It should be good,” Luke Peterson said. “We’ll see.”

The three planned to wander and eat deep-fried cheese curds and a giant egg roll.

Among a separate group at the Fair gates, Vietnamese coffee and “anything on a stick” were on the agenda for Juan Cairo, who drove in from Big Lake to attend with three others toting umbrellas ready to be popped open if needed.

The rain was hit-and-miss on the drive in, Cairo said, but he shrugged, “It’s Minnesota, we’re ready for any weather.”

His friend E Okumura of Anoka saw the sunny side of the unpredictable skies. “There’s usually less lines when it’s raining,” she said with a smile.