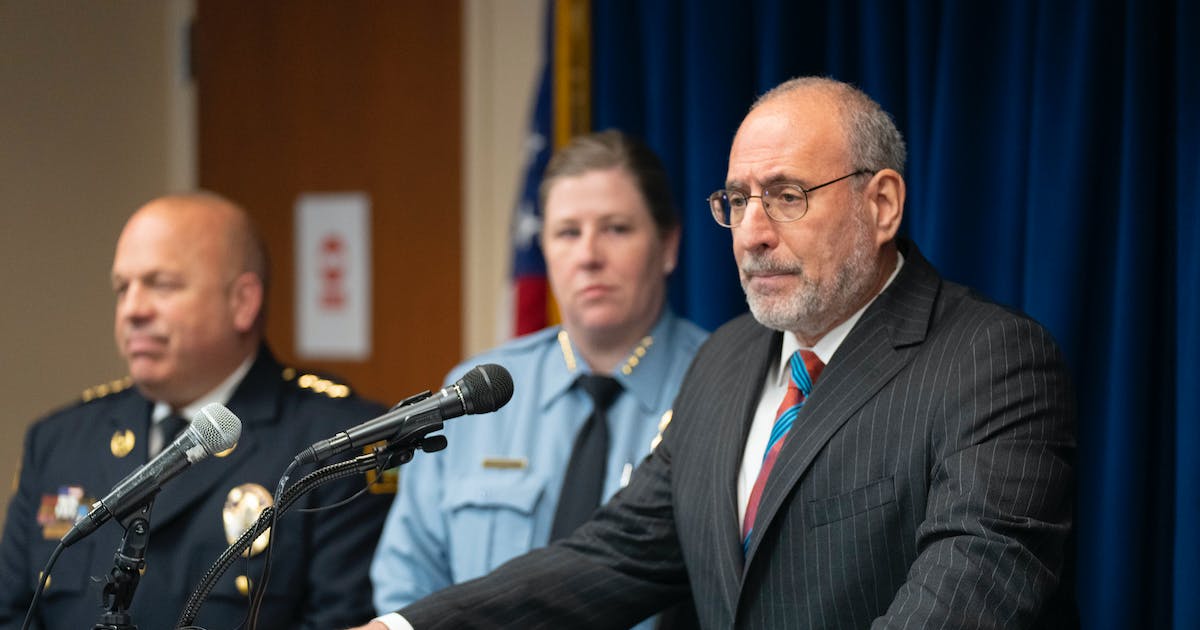 Minnesota U.S. Attorney Andy Lugersaid Tuesday he will devote the “entire weight” of his office to punishing violent criminals, part of an aggressive strategy he says is necessary to curb a surge in carjackings, shootings and gang activity in the Twin Cities.

Standing alongside local law enforcement leaders at the federal courthouse in Minneapolis, Luger said he’s instructed all 42 prosecutors in the criminal division of his office to work on violent crime cases, which he will oversee from indictment to sentencing.

“Everyone within the sound of my voice who is contemplating the next carjacking or engaged in gang activity or trafficking in illegal weapons is forewarned,” Luger said. “End the plague of violence now. You have a choice, and now is the time to walk away. Federal prosecution and federal incarceration are the alternative.”

As of Tuesday, all adult carjackers will be charged and prosecuted under federal statutes, and every person convicted “will serve time in federal prison,” he said. Federal prosecutors will devote more resources to indicting people caught possessing illegal guns or “straw purchasing” guns for black market buyers.

Luger said his office will also focus on shootings involving “auto sears,” a popular gun modification, also known as a “switch,” that illegally transforms a handgun into an automatic weapon.

The announcement comes as violence hits a generational high in some parts of Minnesota. After decades of historically low violent crime, Minneapolis saw 97 homicides in 2021, the most since 1995. St. Paul broke its record for homicides.

When a crime violates local and federal law — such as a shooting with an illegally purchased firearm — prosecutors have discretion over whether to file charges, a decision based on the priorities of the office and calculus of finite resources. Federal prosecutors will continue to devote time to other areas of criminal activity, such as fraud, sex trafficking and cyber crimes, “but each prosecutor will handle violent crime cases in addition to their other work,” Luger said. “Every assistant U.S. Attorney is now a violent crime prosecutor.”

The U.S. Senate confirmed Luger as the state’s top prosecutor five weeks ago, and Tuesday’s news conference set a tone for how he will wield his office’s resourcesin the foreseeable future. He said he plans to hire five to eight more prosecutors who “will immediately dive into this work.”

“We are meeting the moment,” Luger said. “Nothing less is acceptable.”

The new strategy also means more federal agents will be involved in investigations normally handled by local law enforcement—especially in Minneapolis, which has seen a mass exodus of police officers over the past two years. Federal and local policing agencies will partner to create a new gang task force. Two units from the federal Bureau of Alcohol, Tobacco and Firearms have already embedded in Minneapolis and St. Paul. And the FBI will focus more resources on violent crime task forces.

“We will find you,” said Michael Paul, special agent in charge of the Minneapolis FBI field office. “We will take you off the street. And we will ensure you are held accountable.”

Much of the news conference focused on the rise of carjackings over the past two years.

“A few years ago, there were so few carjackings that law enforcement barely even tracked the crime,” Luger said. “Everything has changed. Now they happen in broad daylight and with premeditation.”

Political leaders in the Twin Cities suburbs have lamented the rise in violent auto robberies, prompting Minnesota lawmakers to push bills that would designate a new specific statute for carjackings.

Such a federal law already exists, but federal prosecutors have not frequently charged carjackers in recent years. Luger said he’s instructed local, state and federal law enforcement to bring all carjacking cases to his office for charging now, “and as long as they fit our statute we will prosecutor them under federal law.”

Many of the carjacking suspects arrested recently have been under age 18. Among them were five juveniles accused of stealing an SUV in December and crashing it northeast Minneapolis, breaking the vehicle in two and killing two of its teenage joyriders.

Luger said “it’s difficult” to prosecute juveniles under the federal law. “We’re talking about it,” he said. “We’re not there yet.”

Luger announced several cases his office has recently charged as part of the new priority, including the . They include charges against Desmond Durelle Graham, 32, who is accused of carjacking and kidnapping for allegedly stealing a man’s car, then binding and beating the victim for hours.

He also released the details of several new gun charges, including for a man accused of manufacturing and selling “ghost guns,” a form of privately made firearm with no traceable serial number. According to prosecutors, Jay James Olson, 21, was selling multiple ghost guns, high-capacity magazines, a silencer, several gun kits and other accessories throughout the Twin Cities.

William J. McCrary, special agent in charge of the ATF’s St. Paul field division, played a video of a federal agent shooting a Glock with an auto sear installed, “spraying bullets at a rate that is so violent that the person using it can barely control the gun.”

Auto sears have been an “increasing problem here,” McCrary said. “And they make dangerous individuals even more so.”

Some expressed skepticism of a tough-on-crime strategy that could lead to a repeat in unintended consequences of ’90s-era federal policies, such as a spike in costly incarceration rates.

“We’ve seen this movie before, and we know how it ends,” said Brad Colbert, a public defender who teaches Mitchell Hamline’s Legal Assistance to Minnesota Prisoners Clinic. “It ends with too many people in prison for too long and too many people of color.”

Colbert said he didn’t believe threatening prison as a deterrent for carjackers would be effective, and past policies based on sending more people to prison, and not considering every case’s individual factors, have failed to address crime comprehensively.

“That’s not to say that there’s not a problem. There is a problem,” he said. “But I would hope that we’d have learned something in the last 30 years, and that it can’t just be a return to locking people up. That didn’t work.”

Asked about the potential for unintended consequences, Luger said he talked to victims of crimes and people working to reduce community violence when shaping this strategy. “The message we received from the community is we’ve got to do this,” he said.