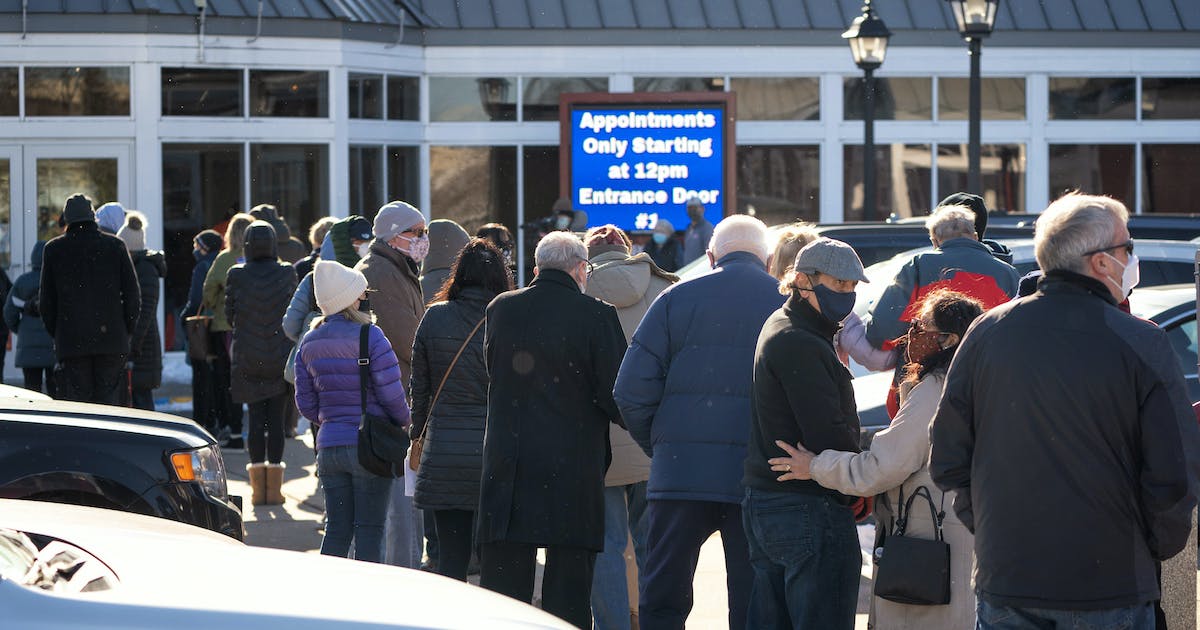 Coronavirus infections appear to be rising well beyond publicly reported levels in Minnesota, but the latest pandemic wave has caused milder illnesses and modest increases so far in COVID-19 hospitalizations and deaths.

While Minnesota is reporting more than 2,100 cases per day — up from 374 in mid-March — the Institute for Health Metrics and Evaluation estimates the real number at more than 10,000 per day.

“In the last 7 to 10 days, I know more people who have been infected than in any other 7-to-10-day time period in the whole pandemic,” said Michael Osterholm, director of the University of Minnesota’s Center for Infectious Disease Research and Policy. “We’re not seeing the numbers reported out like that just because some people aren’t getting tested.”

Nineteen Minnesota counties, mostly surrounding Duluth and Rochester, were designated with high COVID-19 levels Thursday by the Centers for Disease Control and Prevention. The designation mean people are advised to wear masks indoors in public to reduce viral transmission. The seven counties that make up the Twin Cities metro area are among 29 with moderate levels.

Fast-spreading coronavirus variants have fueled a new U.S. pandemic wave this spring of more infections but fewer severe illnesses, putting most of New York and New England at the CDC’s high risk levels.

The CDC levels are designed to alert communities when illness and hospitalization rates could threaten the capacities of their local medical systems. However, even high-risk counties in Minnesota are reporting manageable hospitalization numbers. Doctors report that more of their inpatient COVID-19 cases involve people who were admitted for other reasons and only tested positive through routine screening.

Of Minnesota’s 426 COVID-19 hospitalizations Wednesday, 8% required intensive care. That ICU rate had been above 30% during other pandemic waves.

Severe COVID-19 illness has declined among all age groups this spring, but not as dramatically among seniors who have been more vulnerable to coronavirus infections since the start of the pandemic, according to data released Thursday by the Minnesota Department of Health.

Adults younger than 50, by comparison, made up 7% of the COVID-19 deaths through April, but only one death so far in May.

Seniors were among the earliest recipients of COVID-19 vaccine last winter and booster doses last fall because of their elevated risks, and are likely experiencing waning immunity at the same time as protections such as mask-wearing and social distancing are largely being discarded, Osterholm said. “We’re seeing, basically from a time standpoint, more people who are further away from their last dose of vaccine.”

The age trends are reflected in outbreak data. Infections were identified in 368 residents of congregate care facilities such as nursing homes in the week ending May 7, an increase from 105 five weeks earlier. Preliminary infection numbers declined among K-12 students over the same time.

Vaccination rates could be declining in nursing homes amid turnover in staff and residents, and more boosters might be needed, Osterholm said. Minnesota is below the national average with a completed COVID-19 vaccination rate of 87% among nursing home staff, according to the CDC. However, it is ahead of the national average in the share of vaccinated workers who have received boosters.

Vaccinations have helped reduce the severity of the latest pandemic wave, Osterholm said, including the second booster doses recommended for people 50 and older, with weakened immune systems, or have only received the less-effective Johnson & Johnson vaccine. But immunity wanes in a few months and people aren’t going to be able to keep pace with repeated shots.

“We can’t boost our way out of it,” he said. “One thing that is really important, though, is that so far the vaccines have been remarkable at reducing severe illness, hospitalization and death.”

Despite this increase, wastewater data from around Minnesota suggests that viral levels could be ebbing, if not declining. Viral levels in wastewater tend to rise and fall before changes in COVID-19 case numbers.

Viral levels in sewage samples from 13 metro area treatment plants declined from May 11 through Wednesday, according to monitoring by the University of Minnesota.

Trends could shift, though, especially with Minnesota identifying its first cases involving the BA.4 and BA.5 coronavirus variants that are spreading rapidly in South Africa, said Mark Osborn, the U researcher supervising the wastewater monitoring.

“We are very carefully weighing this in regards to the … subvariants and what trends will be over the coming days/weeks,” he said in an email.

Reports out of South Africa show a similar pattern, though, of faster viral spread and more infections but a lower rate of severe illness, Osterholm said.