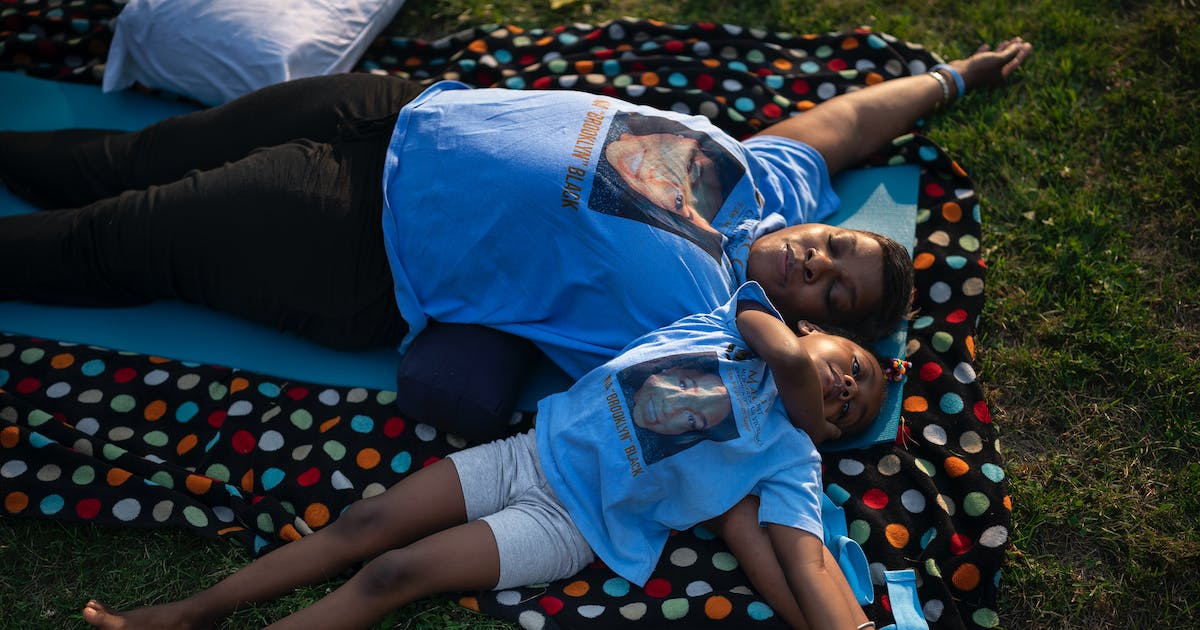 LaTanya Black arrives at Saturday morning yoga in a cloud of grief. Self-care has been hard to come by since she lost her daughter to gunfire two years ago this week.

But when Black enters the studio in north Minneapolis, she is enveloped in hugs and kind words from other women who understand — women who also lost a child or loved one to gun violence. Together, in a restorative yoga class, they give themselves permission to take a respite from reality.

Black started the group — Mothers Against Community Gun Violence (MACGV) — following the 2020 death of her daughter Nia “Brooklyn” Black, a 23-year-old makeup artist and student who was shot and killed when a fight broke out outside the Lamplighter Cocktail Lounge in St. Paul.

In the months after Nia’s death, Black led a series of community peace walks and successfully rallied to close the lounge, which was visited by police more than 700 times from 2018 to March 2021 for assaults, brawls and gunfire.

The group has grown to as many as a dozen moms or other family members who might show up for yoga and many more who come to rallies and walks. They know each other’s ache.

While mass shootings in Buffalo, N.Y., and Uvalde, Texas, prompted new legislation, donation dollars and pleas for justice, such outpourings do not typically follow incidents of gun violence that occur far more often in communities of color, Black said. The deaths of Black and brown youth often seem quickly forgotten and accepted as a fact of life in the Black community and citywide. She and other moms have had to march on their own.

“The shooting comes and goes, but for the victim’s families it’s a lifetime sentence. The murderers of our children get out,” Black said. “But the families get a life sentence behind this, your heart, your soul, everything. You are never the same.”

‘Not on my block’

A crowd of anti-gun violence supporters from organizations across the Twin Cities descended upon Lake Nokomis for a MACGV peace walkathon last weekend. In a sea of red and orange T-shirts for Moms Demand Action and Wear Orange, MACGV members stood as an island of their own in Carolina blue, standing close together and offering hugs and tissues as they listened to speakers kick off the walk.

The shade of blue is a color that Nia loved and heavily featured in her makeup studio. Each shirt featured a photo of the gun violence victim in their life, and the phrase “Minnesota not on my block.”

Romisha Jones, whose 15-year-old son Jaden Blackmon was shot and killed near a two-vehicle crash in Minneapolis last April, found the group at a peace walk last summer. The meditation, yoga and support groups every other Saturday with a pastor have been instrumental for her, she said.

“I think it was just better for me, finding a group of women who are healing and grieving like me, versus folks saying, ‘Oh I lost a mother or dad,'” Jones explained. “That’s totally different from [losing] a child.”

The MACGV mothers don’t often discuss gun violence generally or talk about national statistics because there is enough violence to focus on in the local community, Jones said. So many parents losing children in the Twin Cities need support.

Often, their children’s murders are shrouded in silence, Black said, with people afraid of facing retribution for speaking out. Their children’s stories go quiet then, too.

“I think it’s a matter of being immune to it, you hear it, you feel it so often, that you don’t get a chance to really sit in that grief or that pain,” Black said.

Nia’s killer was charged last August, but until then Black was paranoid of coming across him in her neighborhood. Could she unknowingly be standing beside him in the grocery store?

The day-to-day challenges are more complicated than the chants of “stop the gun violence” that echoed around the lake from preventative gun violence groups that are largely white, said Jones. Her son’s case is still open, and MACGV members understand the pain of having no answers.

“You feel like it’s not for you when you go, because the group doesn’t look like you,” Jones said of the few other options for support. “They can’t understand what you go through.”

There’s no blueprint for after-care for this kind of trauma, Jones said, but the other mothers understand that she’ll forget even basic things like eating or paying bills in her grief.

Support group activities such as yoga can bring up a range of emotions. There was laughter throughout the room as the women got into their final poses with their legs up on the wall. At the end of class, following a meditative pose, Black cried. She heard her daughter’s voice and saw her coming toward her, taking her hand and saying, “Mommy, let’s go.”

“This was relaxing, but sometimes it’s so relaxing I think too much,” Black said.

Constance Styles, another yogi, gave her a hug. Her son Dante Gray was shot and killed by a stray bullet in 1994, and as an elder, Styles knows that healing doesn’t always make you feel good.

“This is not going away, you will live with it forever. But what you have to do is keep living, keep breathing,” Styles said.

Yoga is an appropriate reminder of that mantra, she said. Styles recalled spending 14 years in denial that her child was gone, wondering why this had to happen to her.

“If you’re grieving, your body is going to let you know. I should practice this more because it’s definitely helpful. It makes you reach the places you don’t want to go, and be OK,” Styles said.

Princess Titus, co-founder of nonprofit Appetite for Change, does yoga at home, but she said there is something special about the mindfulness that comes with a restorative practice surrounded by people bonded in their trauma. Her son Anthony Titus was shot in the back and killed by gang members two weeks after his 16th birthday in 2010.

“I do yoga at home, I know the body keeps score. I think every time I come here, I’m dealing with a physical issue. My doctors don’t know what happened, like right now I’m having ankle issues,” Titus said. “As an alternative to waiting on medicine, I have women, I have community, a focus on healing.”

As the two-year anniversary of Nia’s death nears, the MACGV community and yoga practice are more important than ever for Black. This work — organizing peace walks, supporting others in anyway she can — gives her life.

“She [Nia] was still living at home, and her words were, ‘Mommy, I will never leave you, I don’t care where my siblings go, I will never leave you,’ ” Black said. “I just feel like in her dying, me having to advocate for her in this way and for other families, it gives me life. Because if I didn’t have it … I’m afraid of where I would be if I didn’t have some form of hope to keep me going.”