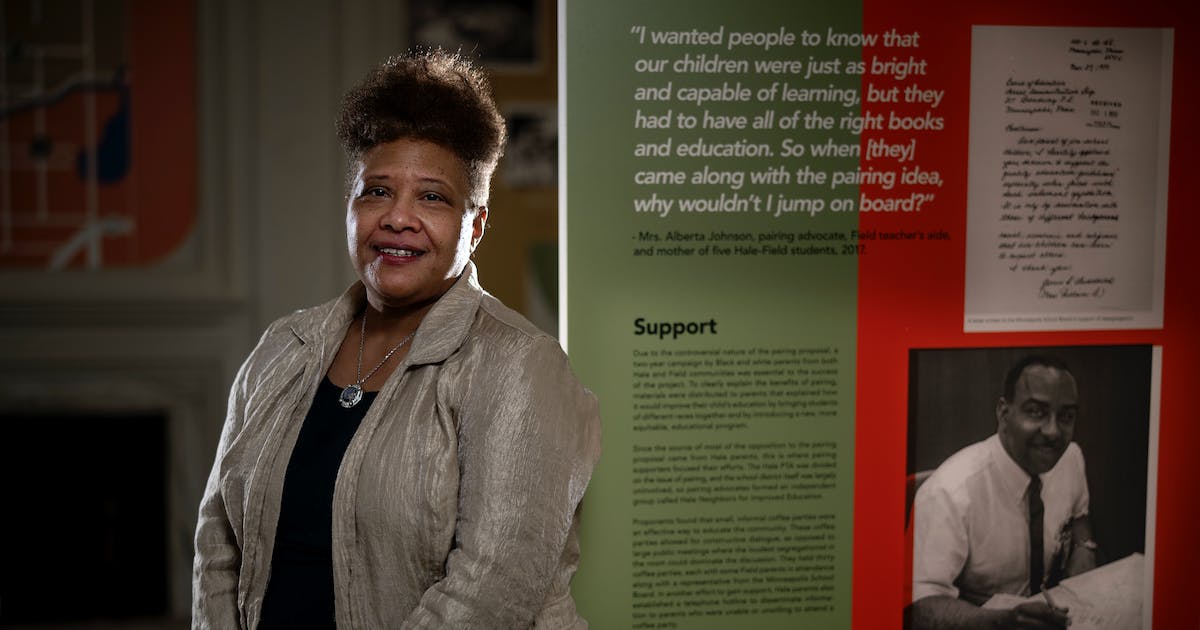 Cindy Booker switched schools in 1971. Instead of walking to Field Elementary in south Minneapolis like she did for kindergarten, she boarded a bus for Hale Elementary for first grade.

What her mother didn’t explain then was the reason for the shift: The Minneapolis school board decided to pair Hale and Field elementaries, mixing their students, to combat segregation and distribute resources more equitably between the two schools. Hale was 98% white and had extra space while Field was over capacity and serving mostly students of color, predominantly Black children.

“As a student, you don’t really realize that context until later,” said Booker, who is Black.

Together, Booker and another former 1971 Hale-Field student named Heidi Adelsman, aim to share that story through a Hennepin History Museum exhibit called “Separate Not Equal: The Hale-Field Pairing.” The exhibit examines segregation in south Minneapolis schools in the ’70s and the efforts by both opponents and proponents of the school pairing.

The city’s schools are still grappling with racial disparities and segregation. Today, students at Field and Hale are predominately white.

The Minneapolis district reassigned thousands of students to different schools last fall in the rollout of its new comprehensive redesign, an effort to lower the number of racially identifiable schools and redistribute resources across the district. That plan, like the Hale-Field pairing, proved controversial.

The district also faces challenges in recruiting and retaining teachers of color. At the time of the Hale-Field pairing, it mandated that 10% of staff be educators of color — that’s no longer the case.

Adelsman, who is white, said one of the best parts of her school experience was learning from educators who didn’t look like her. Her adopted brother was Black and her mother was a proponent of the pairing. Adelsman’s mother and other white Hale families who supported the change faced harassment, including threatening phone calls and acts of violence.

At Hale, more than 70% of families opposed the pairing, according to the exhibit. School board meetings became contentious and the only Black school board member’s home was put under police surveillance for protection after multiple threats.

Opponents created a petition, worked to introduce bills in the state legislature to dissolve the Minneapolis school board and filed a class-action lawsuit.

“It was a painful time in south Minneapolis,” Adelsman said. Like Booker, Adelsman said her mother tried to protect her from seeing or hearing the anger and hate in the community.

Adelsman has spent almost two decades or so collecting stories from the parents and students from that first year of pairing 50 years ago. She interviewed parents who hosted coffee parties for community members to discuss the pairing and remembers one Field parent saying, “We were making history and we didn’t even know it.”

On a recent weekend, the museum hosted a kind of coffee party of its own where current school board members and community members viewed the exhibit and discussed what has and hasn’t changed in the city and the school district over the last five decades.

“It’s important for people to understand this history,” said Booker, who is one of 25 candidates for an open school board seat. “Fifty years wasn’t that long ago and we face many of the same complex challenges today.”

Adelson wants the exhibit to encourage conversations about history while honoring the parents and district leaders who pushed for desegregation and gave her a school environment that she said has shaped her life.

“Not knowing our history keeps us from facing these fears and stereotypes,” Adelson said. “That can perpetuate our indifference and help maintain that segregation.”

The exhibit will be on display at the Hennepin History Museum in Minneapolis until Dec. 31. An opening ceremony for the exhibit is set for 11 a.m. to 2 p.m. Saturday.