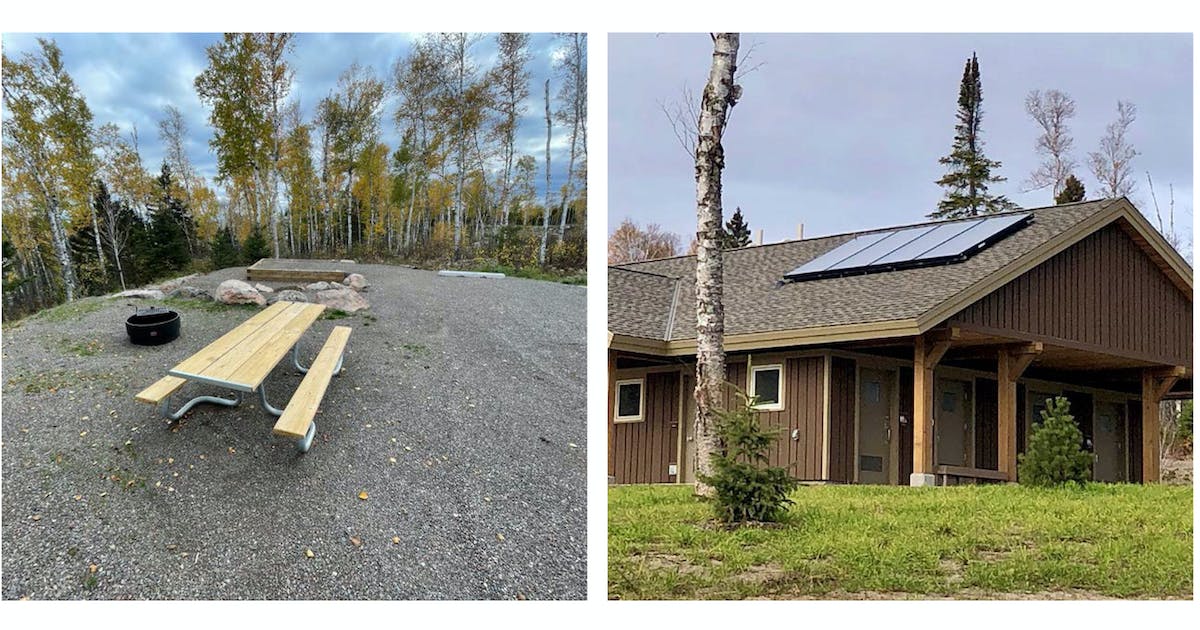 The long-range plan published in 1980 for further development of Split Rock Lighthouse State Park along the North Shore has aged well — so much so that the park of 2022 is making a key part of the plan a reality.

It’s a significant park upgrade in an already busy region flooded with campers who also have upgraded. Energized by the pandemic, recreational vehicles of all sorts are more and more the style choice, and park managers are trying to accommodate the trend.

On June 1, Split Rock Lighthouse State Park will open its new campground — one for the times, too, with 46 drive-in sites catering to amenities, such as electricity, that more campers crave. Reservations for Shipwreck Creek campground went online earlier this week.

Of the more than 280 comments to news of the new campground on the Minnesota Parks and Trails Facebook page this week, most were excited and inquisitive. A technical glitch kept campers from reserving sites for 20 minutes when reservations opened at 8 a.m. Tuesday. But by Wednesday morning, only a few single nights at various sites between June 1 and early August were available.

Rachel Hopper, visitor services and outreach manager for the Department of Natural Resources (DNR) Parks and Trails Division, said Shipwreck Creek is a response to campers’ interest in drive-in sites with electricity, which have the highest occupancy among all state park sites.

“[Shipwreck Creek] fits perfectly for us,” she said.

Katie Foshay, who manages Split Rock Lighthouse State Park, said her office has been swept up with e-mail and phone inquiries.

“The shift from tent to electric camping is huge,” said Foshay, who noted that the new sites also accommodate tent campers. “People are very excited.”

From its origin as a “scenic wayside” in 1945 to its establishment in 1967, Split Rock Lighthouse State Park is a microcosm of the entangled management and expansion issues that in part define the early chapters of North Shore state parks.

But what’s clear is that decades on, park planners who built the 1980 playbook were prescient. Their plan for Split Rock Lighthouse park suggested a maximum of 60 sites for a possible “semi-modern” campground. The plan also proposed the cart-in campsites that would open later in the decade and remain hard to reserve, especially on weekends.

Planners at the time wrote that the park “had the most potential for development of a campground of all parks on the North Shore” and was best-suited for additional camping to lessen the pressure on Gooseberry Falls State Park, just down the Shore.

The long-simmering concept gained relevancy as interest increased in visiting the Shore. In 2008, several North Shore state park projects, including adding sites with electricity at Tettegouche State Park (near Silver Bay), were funded in a bonding bill. Also included was money for the initial design of Shipwreck Creek and road upgrades in both parks.

In the years since, other North Shore state park enhancements paid from the Parks and Trails Fund generated by sales tax dollars from the Legacy Amendment also have been made, including:

Shipwreck Creek’s design was completed in 2011. Construction began in late 2019 and cost about $8 million. Lake County came up with another $1.7 million through a grant to build a new access road to the campground.

Between daily visitors and overnight campers, the North Shore’s Split Rock Lighthouse, Gooseberry Falls and Tettegouche state parks are three of the most heavily trafficked in the system’s 75 parks and recreation areas. Visitors want to be near the Big Lake and the parks put them there.

Depending on the season, but especially the prime summer camping and fall colors seasons, Hwy. 61 is a conga line of RVs and tourist-toting vehicles.

Since 2019, across the state park system, drive-in sites with electricity have been reserved at 97% capacity on weekends. In 2020 it was a percentage point higher, owing to COVID-19’s influence. Drive-in campers on weekends have filled 82% of all available state park sites.

Tettegouche added electric hook-ups to its Baptism River campground in 2009; now there are 21 sites with electricity. Tettegouche hosted 32,039 campers in 2021, a number that has overall increased — but for COVID’s impact on camping in 2020 — since the DNR made 100% of park sites reservable in 2016.

As a longtime resident along Lake Superior, Nina Simonowicz has observed the surge of tourists, some of whom are her customers. Simonowicz has a popular guidebook, “Nina’s North Shore Guide,” and keeps a website, NorthShoreVisitor.com.

Simonowicz, of Grand Marais, said Shipwreck Creek will bring an uptick in campers, a trend that she said began after the recession in 2008. And not just to state parks. All manner of lodging exists along the Shore among motels and resorts and private campgrounds. Additionally, Superior National Forest has dozens of camping possibilities, from backcountry sites to pay-as-you-go.

Other North Shore parks, like George H. Crosby Manitou established in 1955 and close to Tettegouche, are also popular, but draw a different type of camper. Because mining magnate George H. Crosby, who donated the land, requested that the park’s camping experience remain primitive, its 21 sites are reached only by foot amid the woods and rocky crags along the Manitou River.

Whatever number of additional campers the opening of Shipwreck Creek attracts, Simonowicz hopes they relish the beauty and uniquely relaxing atmosphere that Lake Superior and its rocky shoreline provide.

“To me, all of that nudges the visitor to slow and remember they are in a different place,” Simonowicz said.

She came from another busy park, Nerstrand Big Woods near Faribault, to manage Split Rock in the summer of 2019, just ahead of the campground’s construction.

“To come into this park and see the development from before it started and to see it now is exciting,” she said. “You are a part of history.”