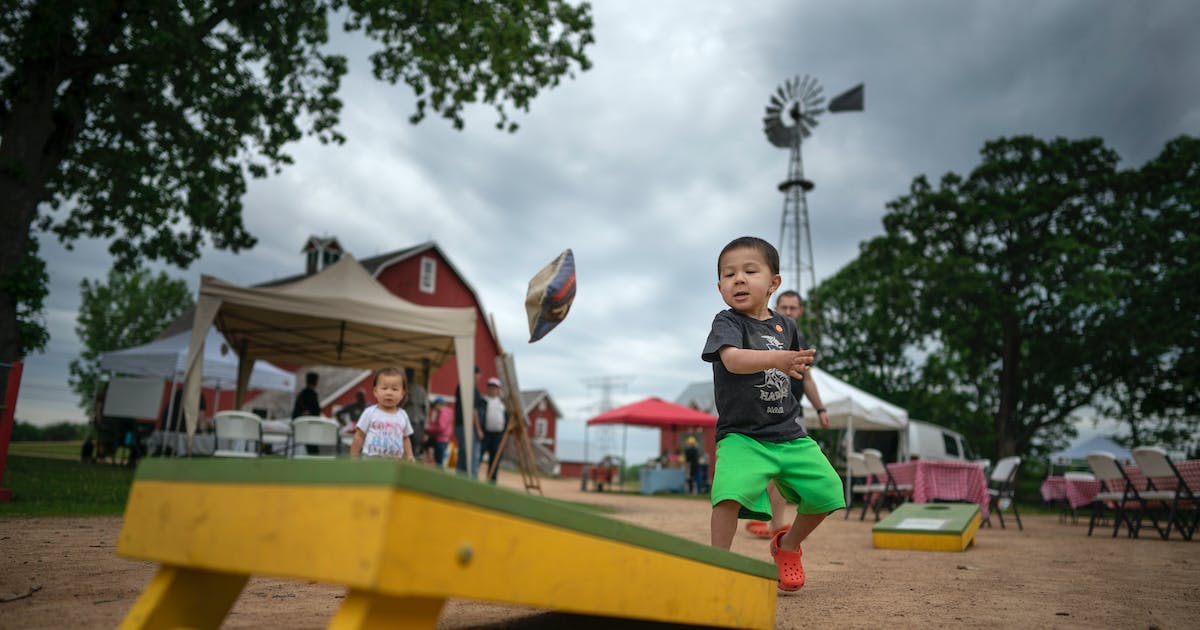 The goal is to transform the Bruentrup Heritage Farm run by the Maplewood Area Historical Society (MAHS) from a quiet roadside attraction primarily visited by a small clutch of loyal volunteers into a thriving multicultural community gathering spot.

“It has the potential to be this beautiful community heart and center of Maplewood,” said MAHS Executive Director T.J. Malaskee.

More than 300 people gathered to shop at a dozen vendors, mingle and play lawn games at the inaugural Big Red Barn Farmers Market on Sunday morning. Vendors selling herbs, onions, rhubarb and baked goods set up between the historic red barn and a 1912 arts and crafts-style farmhouse giving the market a warm air of authenticity. The site’s exhibits were also open to visitors.

The society will host 17 weekly seasonal farmers markets this year with plans to include live music, family activities and food trucks.

The art camp will explore Native American, Hmong and and German American artforms. “We are a cultural institution. You have to meet the community where they’re at,” Malaskee said.

Maplewood is one of the most diverse east metro suburbs, with 40% of its residents identifying as Asian, Black, Native American or Hispanic, according to U.S. Census numbers. Malaskee said telling a fuller history of the region’s people and cultures and hosting a more diverse array of events is important to making the historical society a “thought leader” moving forward. Broadening its appeal to a younger generation is also critical to the nonprofit’s survival, he said.

Other events in the works including the return of the Beer Choir Twin Cities in the historic barn where revelers sip beer, belt out songs — including some traditional German and Irish drinking songs — and learn about the area’s history. The barn is a already a popular rustic wedding venue. As a nod to that, the society is updating its annual summer tea with a bridal theme: wedding dresses throughout history — the good, the bad and the ugly. Attendees will be encouraged to share their wedding photos.

The farmhouse and barn, now located on County Road D, are rooted in German American history. They were built by German immigrant William Bruentrup and his wife, Ida Wagner. The couple wed in 1891 and the bride’s family gave the couple 40 acres of farmland on the east side of White Bear Avenue as a wedding present.

Their grandson and his wife donated the buildings to MAHS in 1999, and the buildings were moved to their present 2.5-acre site. Leased from the city for 99 years, the land is surrounded by 20 acres of public open space.

In an effort to create an even more immersive experience, Malaskee said the society is also updating everything from the baskets hanging on the front porch to the plants in the flowerbed with an eye toward historical accuracy.

Curt Loschy, a member of the historical society’s board, said he’s happy new programming is drawing new people to the site.

“It is important to have that exposure,” Loschy said. “There are a lot a people who just have never had an opportunity to be there. Once they arrive they say, ‘I didn’t know you were here.'”