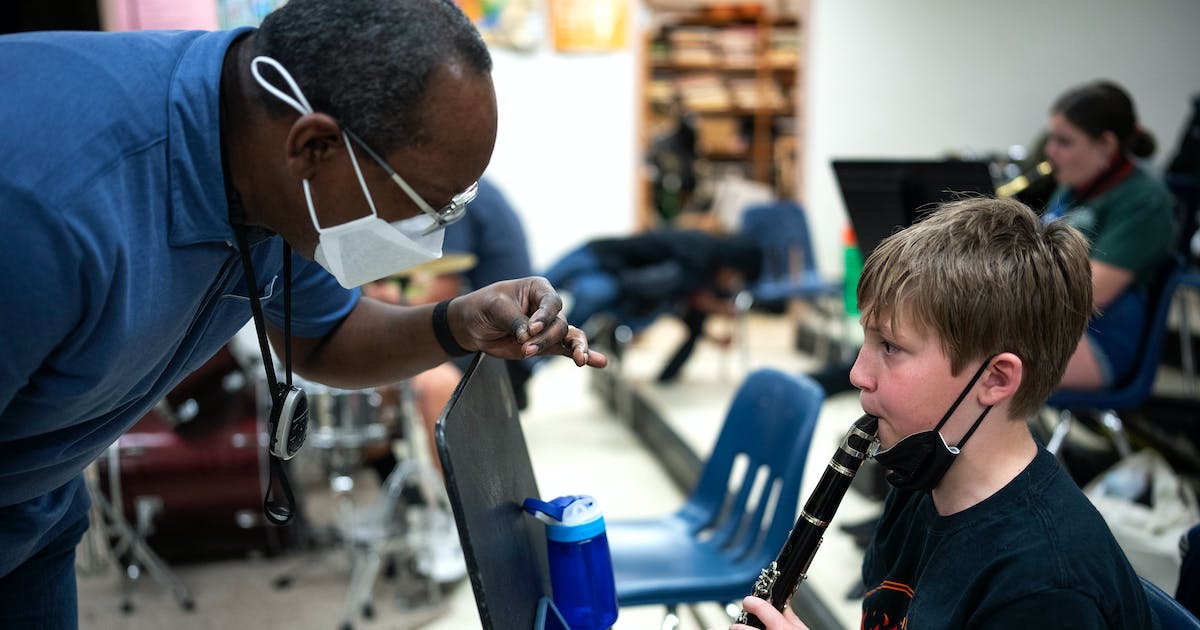 Minneapolis Public Schools, one of the most diverse districts in the state, has long recognized its need for more teachers of color. But 50 of them are losing their current positions this fall, a result of cuts largely tied to enrollment losses.

By next spring, however, teachers of color in the district will have new safeguards. The agreement that ended the three-week teachers strike this spring includes contract language that upends the traditional last-in, first-out hiring policies as a way to retain “members of populations underrepresented among licensed teachers.”

The new contract makes Minneapolis one of the only school districts in the country with such seniority-disrupting language, district and union leaders say. They hope it helps foster a teaching staff that better mirrors the demographics of the pupils they work with, more than 60% of them students of color. Currently, about 16% of the district’s tenured teachers and 27% of its probationary teachers are people of color.

“It can be a national model, and schools in other states are looking to emulate what we did,” said Edward Barlow, a band teacher at Anwatin Middle School and a member of the Minneapolis Federation of Teachers executive board. “Even though it doesn’t do everything that we wanted it to do, it’s still a huge move forward for the retention of teachers of color.”

Having a teacher of color can boost academic performance, graduation rates and even attendance for students of color, according to a report by The Learning Policy Institute, a national education research nonprofit.

But last-in, first-out policies are designed to protect more senior teachers, a higher percentage of whom are white.

For Minneapolis, that has meant even when the district is successful in recruiting teachers of color, “they could be the first to go,” said Candra Bennett, interim senior human resources officer for the district. “That’s completely counter-productive.”

Though both the union and the district had named such protections as a priority, Bennett said it was a “somewhat difficult” journey to get to agreed-upon language. “Let’s be clear — in order to get to that place, someone has to give something up,” she said. “The seniority-based system is the bedrock of union labor.”

The strike, combined with the recent racial reckoning in Minneapolis and nationwide, made the issue more urgent, Bennett said.

“It wasn’t lost on anyone that we need to start doing something differently,” she said, adding that she hopes the language also works to boost recruitment in a highly competitive job market.

The protections are a part of a larger portion of the union contract that includes other anti-racism and anti-bias provisions, including the establishment of a mentorship program for educators of color in the district. According to the contract, the protections are an effort “to remedy the continuing effects of past discrimination by the district” … resulting “in a lack of diversity of teachers.”

While district and union leaders agree that the contract provision is an important step, they say it isn’t enough. The culture of Minneapolis schools must be welcoming and inclusive enough to attract — and keep — diverse educators.

Katie Pekel, principal in residence at the University of Minnesota’s College of Education and Human Development, agrees. She leads a team working on bringing research and ideas to local school districts looking to diversify teaching staff.

Minnesota’s teaching force is about 5.5% teachers of color and its student population is about 30% students of color.

“This is a small piece of a larger puzzle,” she said of the new contract language in Minneapolis, which is similar to recommendations by her team and by Education Minnesota, the state’s teachers union. “We would argue that the recruitment and retention of teachers of color is actually predicated on, ‘Do you have a culturally responsive leader and an environment that is humanizing and affirming to those educators?'”

So far, such contract language hasn’t been widely adopted across the state.

Some districts, however, including Robbinsdale Area Schools, have agreements that protect probationary teachers — defined as those with less than three years of experience — beyond the last-in, first-out order if they better reflect student demographics.

Over the past five years, that agreement has kept 12 Robbinsdale teachers from losing their position, said Peter Eckhoff, president of the Robbinsdale Federation of Educators. The provision is not race-specific — and neither is the one in Minneapolis — so, for example, it can be used to retain a male elementary teacher in a school with mostly female teachers.

“Yes, it’s working and, yes, it’s in the contract … but we still have a long way to go,” said Amy O’Hern, executive director of human resources for Robbinsdale schools. The district has about 65% students of color, and 90% of the teachers are white, she said. “It’s continual conversation and brainstorming to fix that. Districts can’t do that work in silos.”

As Minneapolis implements the contract language for next school year, Bennett said that district officials will be working with the union as well as districts like Robbinsdale.

“I think this is a really easy conversation in theory,” Bennett said. “But when you get into the guts of it, it can be a very difficult conversation.”

Barlow, who is Black, has worked in Minneapolis schools since 1989. He’s proud of the new provisions in the contract, but he said it’s now up to the district to live out the values represented in those words.

“There’s so much more than seniority at stake here,” he said.

“This is a bigger conversation about working conditions, compensation, and microagressions and macroagressions in the workplace,” he said. “Those are the pieces that this district also needs to reflect on and make some motions to improve.”