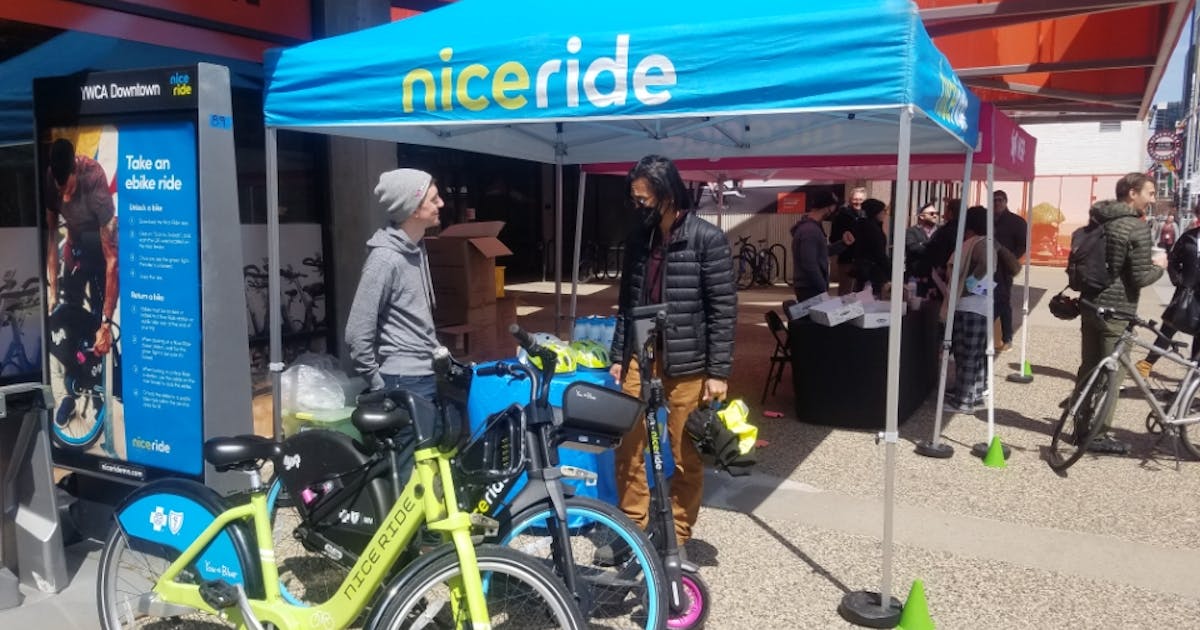 Coming off a record year for ridership, Nice Ride returned to Minneapolis streets Tuesday with its full complement of traditional and electric-assisted bicycles and scooters and hundreds of stations across the city where riders can check them out.

“I am always happy when I see them,” said Kevin Ha, of Minneapolis, who stopped by a kick off celebration outside the YWCA at 12th Street and Nicollet Mall to mark the opening day of the 2022 riding season. “It’s another form of transportation.”

Nice Ride, which is owned by Lyft, will be the sole provider of pedal bikes in Minneapolis, but two other companies — Lime and Spin — also will be deploying motorized scooters. St. Paul is in the process of reviewing applications from vendors to provide scooters in the Capitol city, but not bicycles, said Lisa Hiebert, with the city’s Public Works Department.

The pandemic took a big bite out of Nice Ride’s ridership and membership in 2020, but total rides grew by 200,000 last year to a record 533,000. Much of the growth came from 70,000 riders who hopped on a bike or scooter for the first time, said Tamara Conway, general manager of the shared bike system now entering its 13th season.

A huge jump in use by students, minorities and people with low incomes who qualified for discounted rides through the “Nice Ride For All” program fueled the recovery, she said.

To keep the momentum going, Nice Ride has become the first system in the country that allows riders to use a single app to rent a bike or scooter, said Lyft spokesman Jordan Levine. Chicago may follow suit, he added.

“We want to see people on two wheels,” he said.

Shared bikes and scooters are primarily used for trips of a few miles or less, with 44% of riders using them to run errands and 33% to get to and from work, data from Lyft shows. More than 50% of riders don’t own or lease a car and 86% have used micromobility to connect with public transportation, the company said.

To add convenience, Nice Ride will deploy 446 stations across the city, which will be the most since 2018. More stations can help grow the system, Conway said.

“They are the backbone of the system,” Conway said. “It’s like muscle memory. You know where they are.”

Nice Ride also is one of the first systems in the nation to test mobility hubs where bikes and scooters are placed near transit stops. The hubs allow transit riders to complete what’s called “Last Mile” trips, the gap between a bus or rail stop and their final destination.

The Minnesota Department of Transportation has provided a Clean Transportation grant to pay for the hubs that could appear later this spring, said Danielle Elkins, mobility manger for the city of Minneapolis.

Nice Ride also is one of the first in the nation to supply data to third party apps such as Transit App, which allows riders to plan multimodal trips and find where bikes and scooters are available.

To whet riders’ appetite, Nice Ride officials handed out helmets, water bottles and coupons for a free ride to those who stopped by the celebration. But the best advertising for bike and scooter riding Tuesday may have been the bright sunshine.