Not to split hairs, but St. Paul barbershop may rank among nation's oldest 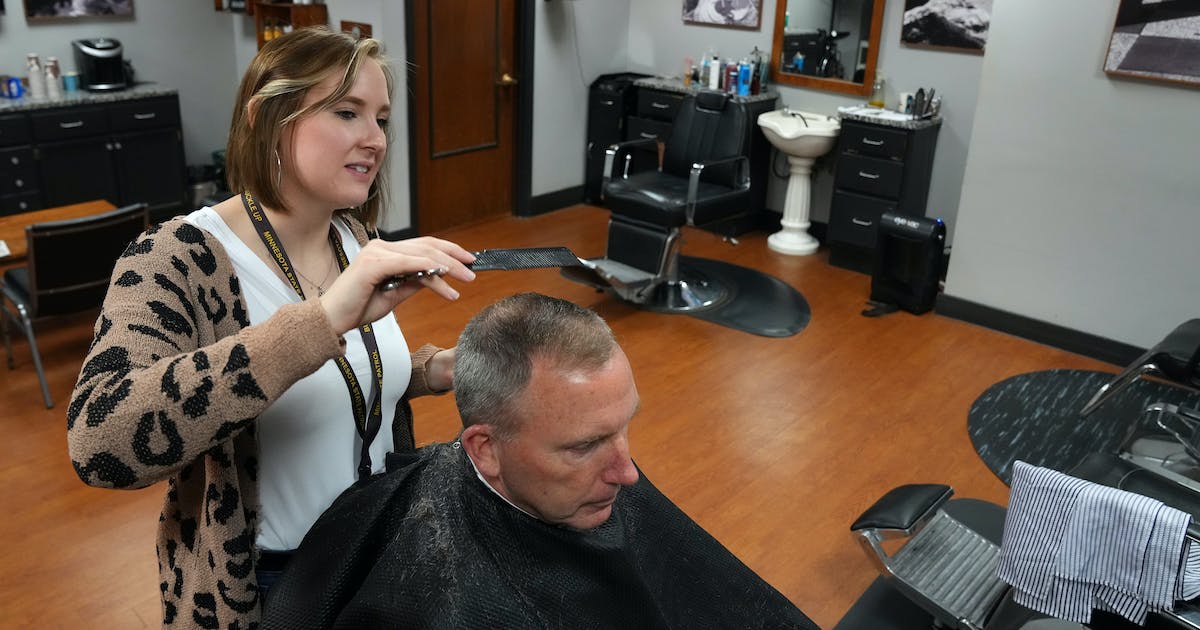 When it comes to barbershops, history is a big deal.

Not to split hairs, but that may not be entirely true.

While Kirkpatrick said the shop dates to 1883 — then located at the second State Capitol in downtown St. Paul — records are a little fuzzier on when it relocated to the current State Capitol after it opened in 1905. In 1932, the shop moved to the space in the State Office Building it’s had ever since.

“The fact is, there has been a barbershop on the State Capitol campus since 1883,” said Kirkpatrick, who bought the shop from his dad, Ken, in 2016. Ken Kirkpatrick bought Capitol Barbers in 1972 and still cuts hair there.

“I’ve cut every governor’s hair since Wendell Anderson” Ken Kirkpatrick said. “Except Jesse Ventura. He didn’t have any.”

Ken Kirkpatrick can also rattle off the names of the barbers who snipped and clipped on the Capitol grounds before him.

“Hank Bream had it for seven or eight years before me. And before him, Harold Lawson had it for 35 years,” he said.

It all started with Walter Gassoway nearly 140 years ago.

“He was the first to call it Capitol Barbers, from what I understand,” Ken Kirkpatrick said.

The Kirkpatricks admit there may be other, legitimate claimants to the “oldest barbershop” title. It all depends on how one defines longevity.

George’s Barber Shop in Saugus, Mass., was founded in 1902 and calls itself “the Oldest Barbershop in the USA!” It certainly seems to be the oldest run by the same family, now in its fifth generation of haircutters.

Capitol Barbers might not even be the oldest shop in Minnesota — at least to operate at one site. Located in St. Paul across from the old Schmidt Brewery, 7th Street Barbers has been a “continually operating” barbershop since 1893, said owner Pete Klein.

But no matter how you cut it, Capitol Barbers has a hefty history. And its significance is not lost on Erin Diede, who has cut hair there for three years. She feels it every day, she said.

“It’s kind of like a weird nostalgic feeling,” said Diede, who sometimes works alongside Ken Kirkpatrick. “He has clients who have come here for 50 years, which is kind of insane to me.”

Kent Whitworth certainly appreciates the shop’s history. The CEO and president of the Minnesota Historical Society has been coming to Capitol Barbers for three years. His great-grandfather could also have been a patron, Whitworth said. He was a state senator from 1903 to 1905.

Why are barbershops and history so interwoven?

“I would say barbershops and country stores are sort of the original gathering places in America. It’s where business is conducted, and a lot of issues are worked through,” Whitworth said.

Neal Abbott was Diede’s next appointment Thursday at 12:15 p.m. The marketing and communications coordinator at nearby St. Agnes School has been coming to the shop since moving from Stewartville six months ago. He has sat in Ken Kirkpatrick’s chair four or five times during that time.

“Having grown up in a small town, I really wanted an environment where I felt I could just come and talk and relax and get a haircut,” he said.

“I like that I’m getting my hair cut by the same guy [Ken] who cut governors’ hair,” he said.

Josh Kirkpatrick, who in 2018 opened a second barbershop in Waconia, said he embraces the responsibility of owning the historic shop. Barbers and their shops hold an integral place in Minnesota, American and world history, he said.

In 1887, Minnesota was the first state to pass a law requiring barbers to be licensed, he said. Further back, barbers once performed dental work and surgeries. Barbers are even mentioned in the Bible, Josh Kirkpatrick said.

“It’s the oldest profession in the world,” he said, before pausing. “Well, maybe the second oldest.”