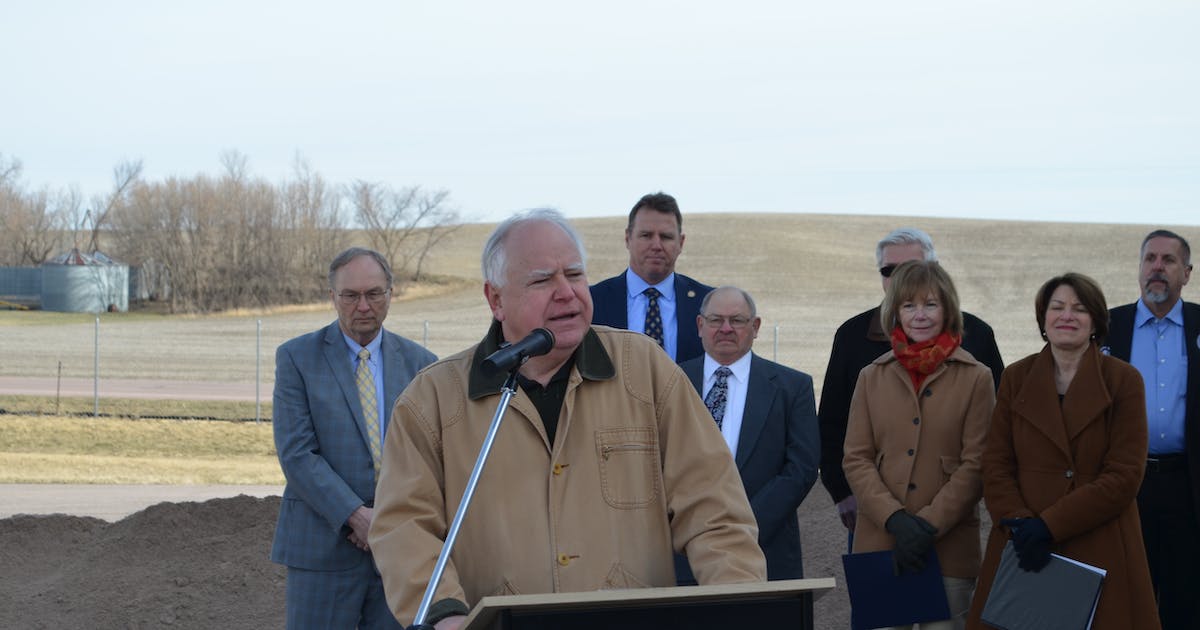 COURTLAND, Minn. — For more than 60 years, residents from Rochester to New Ulm have lobbied to make Hwy. 14 bigger and safer.

That dream will soon come to fruition as work begins on expanding 12.5 miles of Hwy. 14 to four lanes from New Ulm to Nicollet, the last two-lane section of road from there to Rochester.

Federal, state and local officials broke ground on the $84 million project Tuesday morning in Courtland, where Hwy. 14 passes through. The project reroutes the highway north of town, which would considerably cut down traffic through the small community.

Work is expected to finish in fall 2023 and is funded in part from a $22 million federal transportation grant Minnesota secured in 2020.

About 9,000 vehicles — including 1,100 commercial trucks — cross Hwy. 14 daily, which has been a driving factor in expanding the highway. Proponents have urged state and federal officials to complete the road so rural goods can move more smoothly across southern Minnesota, increasing economic opportunities for area communities.

Walz, who pushed for federal funding in Congress as the Minnesota’s First Congressional District representative, also highlighted the road’s reputation as one of the most dangerous roadways in the state along its two-lane stretches. Walz lost a neighbor in a traffic accident on Hwy. 14 during his days as a football coach for Mankato West High School.

From February 2010 to February 2020, 154 crashes took place on the two-lane stretch from Nicollet to New Ulm. Of those, three were fatalities and one resulted in serious injuries.

A series of traffic fatalities in the late 2000s and subsequent media coverage spurred the state to create its Corridors of Commerce program, which helped fund Hwy. 14 expansions in other areas, including a 12-mile stretch from Owatonna to Dodge Center.

That project was largely completed last fall, though interim MnDOT Commissioner Nancy Daubenberger said workers will wrap up work along the shoulder and ditches this summer.

“Soon there will be generations that grow up and learn to drive and live their lives in this area without having to fear Hwy 14,” New Ulm Mayor Terry Sveine said.

For local officials, and anyone who has traveled on Hwy. 14, the last expansion can’t come soon enough. U.S. Sen. Amy Klobuchar, D-Minn., noted she and Walz have been to six Hwy. 14 groundbreaking ceremonies since she was elected to Congress and reminisced on the times she would be late for meetings or coming home due to slow traffic on the highway.

“You are literally going at parade speed,” Klobuchar said. “And the only people that like parade speeds are those elected to office.”

Courtland Mayor Al Poehler shared the time a member of the town’s council had to stop traffic to cross the highway, which cuts through town and forces drivers to slow to 35 mph. He said the numerous traffic fatalities that took place in Courtland over the years reinforced how necessary the highway expansion is to protect residents.

Rep. Paul Torkelson, R-Hanska, has advocated for Hwy. 14 projects as the ranking House Republican on transportation issues at the Minnesota Legislature for the past few years. He said residents urged him to work on the highway even before he announced his first run for state office in 2008.

“That’s how important it is to the citizens,” he said.