One year after Daunte Wright's killing, his family vows to keep fighting for justice 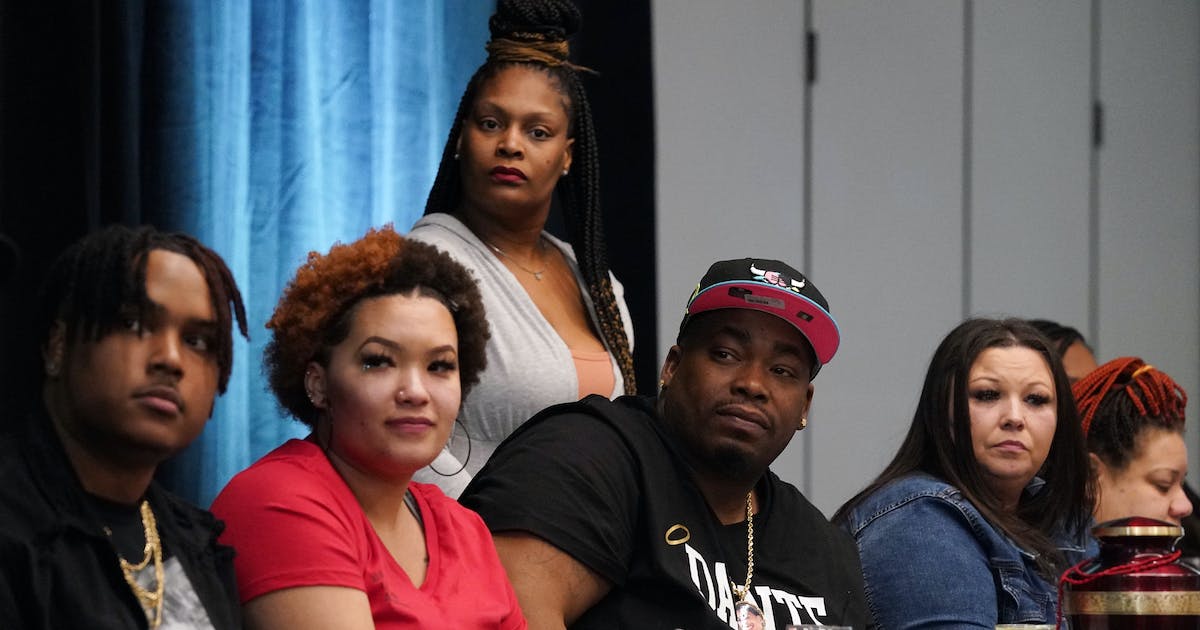 As Katie Wright prepared to celebrate the life of her son killed by a Brooklyn Center police officer, she stopped to reflect on how much she has changed since that deadly traffic stop last year.

“You go from mother to warrior. I literally feel like Xena,” she said, referencing the warrior princess in the hit fantasy TV series. “I wasn’t an activist prior to this — I’m a retail manager … But when your child is taken by somebody who’s supposed to serve and protect, you have a fight and a fire that is burning inside of you.”

It also planted a seed of advocacy within Katie Wright — who also goes by her last name, Bryant — to push for policy changes and start a nonprofit.

The Wrights’ path to justice appeared to open when the jury found Potter guilty of two counts of manslaughter in December for shooting Wright when she intended to draw her Taser. When Judge Regina Chu sentenced Potter to a two-year prison term — significantly below state guidelines — Aubrey Wright said the struggle over the loss of his son became much harder to bear.

“The sentencing let us know that the fight is not over,” he said. “I think we were robbed. I talked to Daunte like, ‘We’re going to get some justice for you.’ ”

Attorney General Keith Ellison, who was seeking a seven-year sentence for Potter, said in a statement that he accepted Chu’s judgement and asked everyone to do the same. But the Wrights are demanding an appeal — the latest fight in a year full of battles.

Jeff Storms, a member of the legal team representing the Wrights along with Florida attorney Ben Crump, said Ellison has until the end of May to file an appeal. That decision solely rests with the attorney general.

“If he opts not to appeal the case, the family has no other remedy at that point,” Storms said. “It’s not a situation where we could step in as private lawyers and appeal the sentence.”

Storms said the legal team is still considering a civil lawsuit — which could be financially crushing for Brooklyn Center and its taxpayers — but he would not comment on the status of that case. Meanwhile, he said the family continues to advocate for changes in policing in Brooklyn Center, across the state and on a national level.

“I think the family has really shown the entire country how much [Daunte] meant to them,” he said. “I think their love for him is really reflected in how hard they fought for him and other people since he was killed.”

Brooklyn Center police stopped Wright while he was driving a vehicle with expired plates. The criminal complaint said Wright initially complied but then tried to escape and get back behind the wheel of the car when told he was under arrest for a warrant.

Potter testified that in the chaos of the moment, she mistakenly pulled out her service gun instead of her Taser. In body camera footage, she can be heard shouting “Taser! Taser! Taser!” before shooting and killing Wright.

The Wright family, along with the family of Kobe Dimock-Heisler, a 21-year-old autistic man shot and killed by Brooklyn Center police in 2019, championed a public safety resolution passed by the City Council in May to begin $1.3 million in police reform initiatives.

That resolution has made its way to Evanston, Ill., where it’s been included in that city’s research to reimagine public safety. “It’s one of the ideas people in town are interested in pursuing,” said Mayor Daniel Biss.

The controversy surrounding no-knock warrants rose again after the February killing of Amir Locke by Minneapolis police executing a no-knock warrant during a pre-dawn raid. Locke, who was not the subject of the warrant, was shot to death.

Katie Wright and Dimock are also teaming up to create a nonprofit to support other families of loved ones killed by police. They are in the process now of finalizing a name and officially filing the nonprofit with the state. Its mission will be multifold, such as offering healing retreats and calling on other cities to adopt the Daunte Wright and Kobe Dimock-Heisler Community Safety and Violence Prevention Resolution.

Dimock said her family has become close to the Wrights over the past year and they can’t help but feel they were brought together for the purpose of bringing light to their painful losses.

“I couldn’t have asked for a more incredible family to be in this horrible situation with,” Dimock said.

“If anybody told you that time makes it better, they lie,” Dimock said.

While the anniversary of Wright’s death is marked with somber remembrance, his life was also celebrated with dancing and balloons. Family, friends, and activists who never met him came together Saturday at a Brooklyn Center event venue for a party in his honor.

Katie and Aubrey Wright welcomed hundreds of guests to enjoy live music and a free dinner with table centerpieces made from the flowers and vases left over the past year at the memorial site on 63rd Avenue and Kathrene Drive.

On Monday, the family and supporters planned to return to the memorial for for a barbecue dinner — Daunte’s favorite — and a candlelight vigil at sunset. Aubrey Wright said that while he’s happy the community is supporting his family at this time, he’s still “missing my son every day.”

“The grief is always there,” he said, “and it doesn’t get better.”

Katie Wright said that while the grief doesn’t go away, she will have to find a way to continue on.

“You learn to live a new life you’ve been given,” she said.