Pacifist volunteers starved themselves for science in Minnesota study during WWII 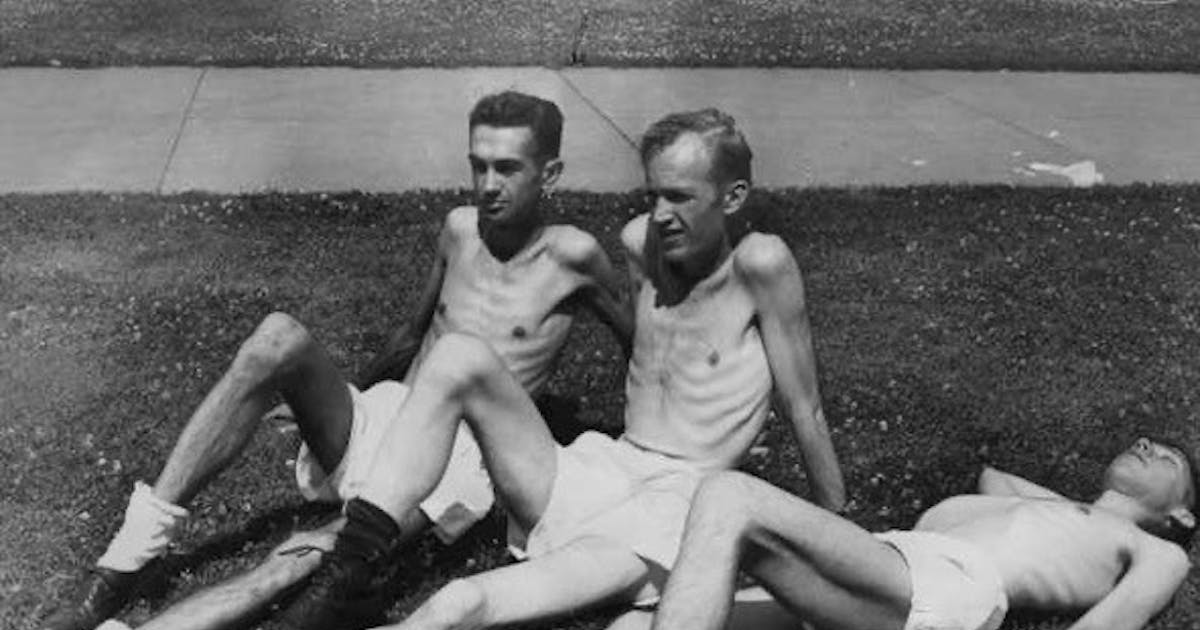 Max Kampelman was a Jewish kid from the Bronx. Henry Scholberg was born in Darjeeling, India, the son of Methodist missionaries. And Marshall Sutton was an idealistic Quaker who grew up in a rural New York hamlet.

Despite their different backgrounds, the trio shared a common belief in pacifism that led them to participate in an extraordinary scientific experiment toward the end of World War II. While many of the nation’s young men headed off to battle, Kampelman, Scholberg and Sutton declared themselves conscientious objectors and subsequently joined 33 other so-called “guinea pigs” who volunteered to be semi-starved as part of a groundbreaking, yearlong University of Minnesota study examining the physiological and psychological effects of starvation.

The 1944-45 project, funded by the U.S. Army, was aimed at helping policymakers figure out how to “re-feed” millions of prisoners and refugees left woefully malnourished during the war.

“These young men were eager to to prove their mettle, to show that they weren’t slackers, to prove their toughness,” Todd Tucker — who wrote the University of Minnesota Press book “The Great Starvation Experiment” — told the Star Tribune in 2006.

Working from a lab beneath the U of M’s Memorial Stadium, the conscientious objectors spent their first three months eating and exercising regularly. They shed about a quarter of their weight and lost mental alertness in the next six months as their bland, no-protein, meatless diets of 1,760 calories mirrored what war victims might eat: turnips, tiny helpings of macaroni, weak soup, potatoes, rutabagas. In the study’s final three months, they were gradually re-fed more calories.

Images of their protruding ribs and gaunt physiques live on digitally at the Hennepin County Library and the Minnesota Historical Society.

“The experiment is still cited as a source of reference by academics studying nutrition and eating disorders, and it raised many questions about how far psychological problems can be treated if the subject is still starving,” according to a 2014 BBC story.

Kampelman, Scholberg and Sutton showed there were other ways to contribute to the war effort beside fighting. All three men, who died in the past decade, insisted their months of starvation were some of their proudest moments.

“You go to bed at night thinking of food and wake up in the morning thinking of food. It is boring, if virtually unavoidable,” Kampelman wrote in his 1991 memoir, 12 years before his death in 2013 at 92. “My night dreams were not of sexual fantasies but of candy bars.”

Kampelman went on to become a close adviser to Sen. Hubert Humphrey and a diplomat negotiating human rights and arms reductions for presidents Jimmy Carter and Ronald Reagan.

Scholberg was an editor at small newspapers in Onamia, Minn., and Brainerd; acted and directed in dozens of plays; served as a Global Volunteer from Tonga to Jamaica and was a curator and librarian at the University of Minnesota before his death in New Brighton at 91 in 2012.

He considered the starvation experiment “the noblest and most decent thing I ever did in my life,” he wrote in 2002, recalling: “One of the most depressing sights was to see where someone had spilled an ice cream cone on the sidewalk.”

They were allowed to consume all the water, black coffee, chewing gum and cigarettes they wanted. Participants had to walk or run 22 miles a week, expending at least 1,000 calories more than they consumed daily.

Scholberg lost so much weight that he sat on towels to offset the lost padding.

Warned about being thought a coward for his conscientious objector status, Sutton at first worked with tuberculosis patients and did forestry chores. Then he saw a brochure with children on the cover, seeking volunteers for the starvation study and asking: “Will you starve that they be better fed?”

“I wanted to identify with the suffering in the world at that time,” Sutton told the BBC three years before he died in 2017 at age 99. “I wanted to do something for society. I wanted to put myself in a little danger.”

During his six months of semi-starvation, Sutton said, his moods swung.

“Your state of being is just numb,” he said. “I didn’t have any pain. I was just very weak. One’s sexual desires disappeared. When something good happened, we would explode with joy, and when we were pessimistic, we were very depressed.”

Dr. Ancel Keys, who directed the study and the U of M’s Laboratory of Physiological Hygiene, published his findings in two thick volumes in 1950.

“It remains a primary reference in the study of hunger,” according to MNopedia.org.

Dr. Harry Blackburn, a University of Minnesota epidemiologist, said Keys’ study was “a pioneering work [that] was beautifully designed, well-analyzed, well-presented and effectively published” — calling it “the first and perhaps the only ever done” on starvation.