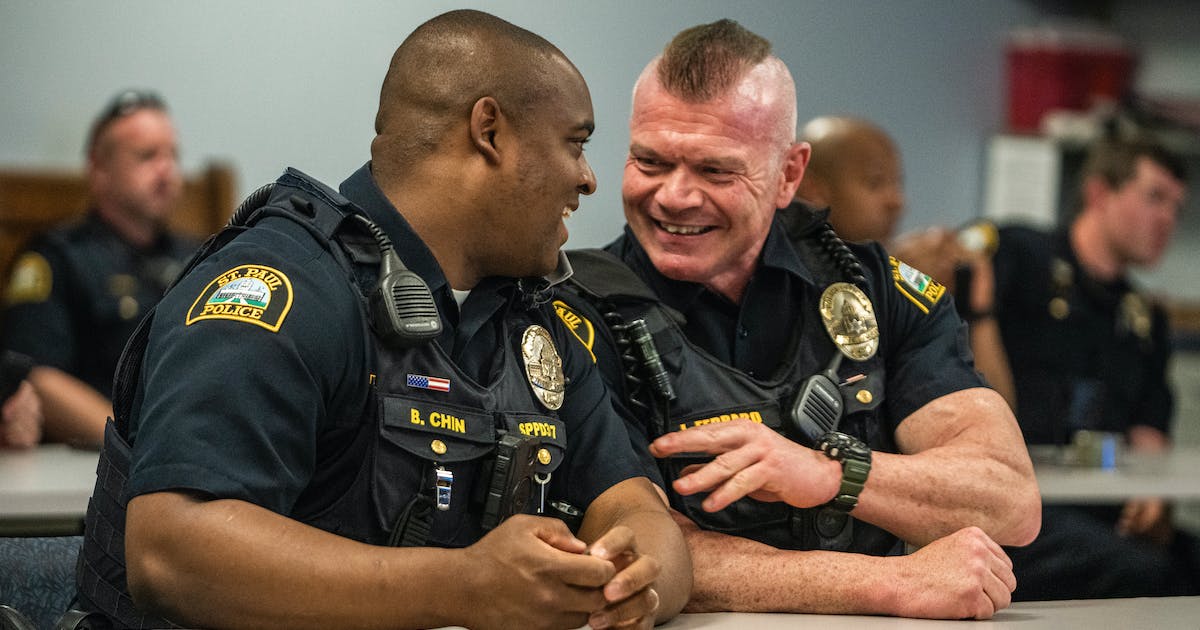 It could be a brilliant product endorsement. But the following statement is true.

Brad Chin would likely not have become a St. Paul police officer if Lou Ferraro didn’t like Arby’s chicken sandwiches.

Chin, then a 17-year-old evening shift leader at the Arby’s at Suburban and White Bear avenues, and Ferraro, an East Side cop, exchanged greetings every time the officer came in for his weekly sandwich. Greetings became conversations. Conversations became friendship. Friendship turned to mentorship.

They are the kind of cops — one a 28-year-old “rising star,” the other a 58-year-old policing “legend” — who are models of the caring and dedication that cities need their police to be, former St. Paul Police Chief Todd Axtell said. Ferraro, the 2019 St. Paul Police Officer of the Year, and Chin, newly elected president of the Minnesota chapter of the National Black Police Association, now work together every afternoon shift in the department’s Eastern District.

“The relationship they share with one another is as special as their relationships with St. Paul,” Axtell said on Tuesday, his last day leading the department.

And it began when Chin, a lifelong East Sider and a senior at Tartan High School in Oakdale, impressed the personable Ferraro with his personality.

“As I was eating my chicken sandwich, I saw him interact with customers and other employees,” Ferraro said. “On the East Side, we deal with different cultures, different religions, different people. We need officers who represent the community we work in.”

“Right away, I knew that Lou was someone I should connect with. I could just tell he was the same way that he just said about me,” Chin said. “He could relate to me. He was able to talk to a 17-year-old kid and say, ‘You can do this.’ And I needed to hear that.”

Over the next several years, Ferraro became Chin’s mentor, advising him every step of the way.

Ferraro told him to take a job as a loss prevention officer at Menard’s while studying criminal justice at Inver Hills Community College. He encouraged him to work for the Sherburne County Sheriff’s Office as a corrections officer. And he convinced Chin to trade in his suburban jail job for a lower-paying gig as a parking enforcement officer in St. Paul — with its corresponding drop in prestige — because he would get his foot in the door for the St. Paul police academy.

“I was good in Sherburne,” Chin said, laughing. “And you want me writing parking tickets?”

The advice was golden. So were the ride-alongs, visits to roll call and reference letters Ferraro wrote on Chin’s behalf. After less than a year writing parking tickets, Chin was accepted into the police academy in 2017.

He said he appreciates the path “that Lou has set out for me.”

The role of mentor is a natural one for Ferraro, a graduate of Minneapolis Edison and the University of Minnesota and the oldest of four boys who grew up in northeast Minneapolis. He did the same for his younger brothers through high school and college, he said. His uncle, himself a 36-year police officer in St. Paul whose beat was Grand Avenue, did the same for him.

“He guided me and mentored me,” Ferraro said. “He always said, ‘When you meet someone, shake their hand. Remember their name. And make sure they feel appreciated.'”

Just before entering the police academy, Chin changed his last name from Easley — belonging to the father he’s never met — to that of his mother. Victoria Chin’s father was from Hong Kong, her mother from Jamaica. She raised her three kids as a single parent and sent Brad to Catholic school at St. Pascal’s.

She sacrificed, her son said. He wanted to recognize that as he worked to become a cop.

And when Ferraro was named St. Paul’s Police Officer of the year, he invited Chin to sit with him and his family at their table.

Senior Commander Kurt Hallstrom said “Lou is a fantastic cop. He cares about the community. He will check on people in the community.”

He also recognizes the challenges attracting young people from the broader community into police work, Hallstrom said of Ferraro. That’s why when he recently learned of the older officer’s mentorship of Chin, he wasn’t surprised.

“Lou’s had a good career. He has a lot of honor, a lot of pride,” he said. “And bringing new people into the profession, we’ve got to have guys like Lou who are out there cheerleading for us. To find people who are interested.”

Chin, too, “is a good cop. A leader. Really cares about the community,” Hallstrom said. Chin has made his own connections with East Side kids, such as volunteering to organize basketball camps.

“And when experienced officers show that leadership, others follow,” Hallstrom said.

That Ferraro calls Chin an “absolutely incredible” officer makes him “ecstatic,” Chin said. That Chin, like Ferraro, now works with new officers makes the mentor swell with pride. Chin was one of three liaisons chosen to work with the recently concluded police academy, guiding and advising 22 of its 66 members. He is also a field training officer, working with cops new to the streets.

They are both married and are fathers to two children.

The younger officer said becoming Ferraro’s friend — and following his advice over more than 10 years — has absolutely been the right choice.

“Lo and behold, I come to the St. Paul Police Department and [learn] anything with Lou’s name on it is done right,” Chin said. “It’s done the correct way and it’s done with trust and service with respect.”