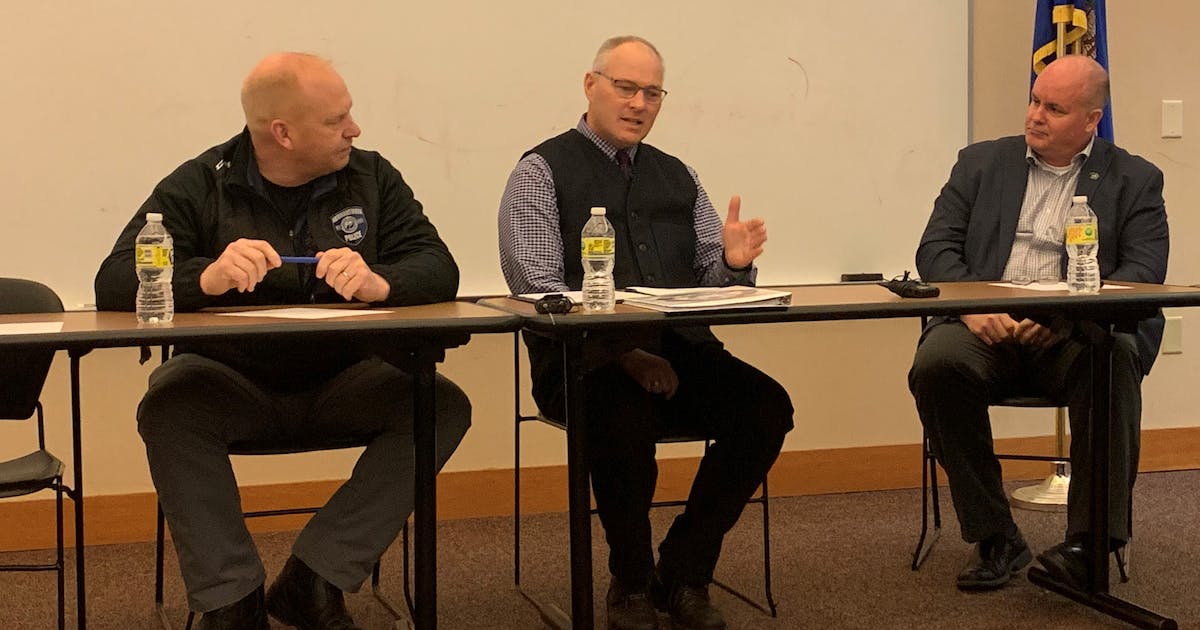 HERMANTOWN, Minn. — The Duluth Police Department is down about 26 officers from what the city has budgeted for this year, a shortage that Police Chief Mike Tusken describes as a crisis.

The future of staffing is equally grim. Tusken, who moonlights as an adjunct professor at Fond du Lac Tribal and Community College, said his law enforcement class typically has 25 students per semester. This year he had 13 in that same period.

“We truly don’t have enough candidates coming in to fill the vacancies in our law enforcement community in the state,” he said during a roundtable with Minnesota Republican U.S. Rep. Pete Stauber and law enforcement officials from neighboring communities on Wednesday at Hermantown City Hall.

The shortage isn’t unique to Duluth. Hermantown police chief Jon Crace and Tusken, who pull from the same dwindling pool of candidates, joked about stealing recruits from each other — though it is a serious issue. Crace said he was on the phone offering an applicant a job while Tusken was on the other line trying to lure her to Duluth.

“Thankfully she didn’t, she stayed with us,” Crace said. “We are fighting tooth and nail for the same applicants. We never used to have to do that. There was enough applicants to go around.”

While Stauber was in Hermantown, Gov. Tim Walz and Lt. Gov. Peggy Flanagan were also hosting a roundtable in Burnsville on what the $300 million public safety plan would mean for the suburb. The budget proposal would direct money to Minnesota communities to specifically address public safety needs.

Two St. Cloud legislators recently drafted bills with an eye toward attracting and retaining officers. DFL Rep. Dan Wolgamott’s bill advocates for bonuses of up to $10,000 for peace officers who remain on the force for a designated period of time. The grants come with a stipulation that officers wear body cameras and have community engagement practices. GOP Rep. Tama Theis’ bill offers a financial incentive: officers would not have to pay state income tax for two years.

The Duluth Police Department has 132 officers, “boots on the ground,” this year, Tusken said — though they had budgeted for 158. He said some are out addressing mental health, while some have been lured away by bigger paychecks in bigger cities.

In the mid-1990s, President Bill Clinton’s Community Oriented Policing Services program beefed up the number of officers on the streets. Duluth added about two dozen at the time, officers who are now able to retire.

“We will not just hire anyone in our organization,” Tusken said. “We don’t lower our standards. If we don’t have the people who we expect to serve our citizens, we would rather work short. Unfortunately, being very picky has compounded our issues.”

Prompted by Stauber to offer solutions, Tusken pointed to money.

“I think what it comes down to is dollars,” he said, suggesting a federal campaign pushing jobs in policing and scholarships, specifically to recruit in communities of color.

Wednesday’s roundtable was one of several similar stops for Stauber, who is seeking re-election for his third term in the Eighth District. He was in Chisago County on Monday and said he planned to meet with the Minnesota Police and Peace Officers Association.

“It’s my responsibility as a representative — and having 23 years in the profession and leading those negotiations at our nation’s capital — it’s incumbent on me to meet with our local leaders,” Stauber said. “We have an opportunity to talk and show the public how important law enforcement is to our communities.”