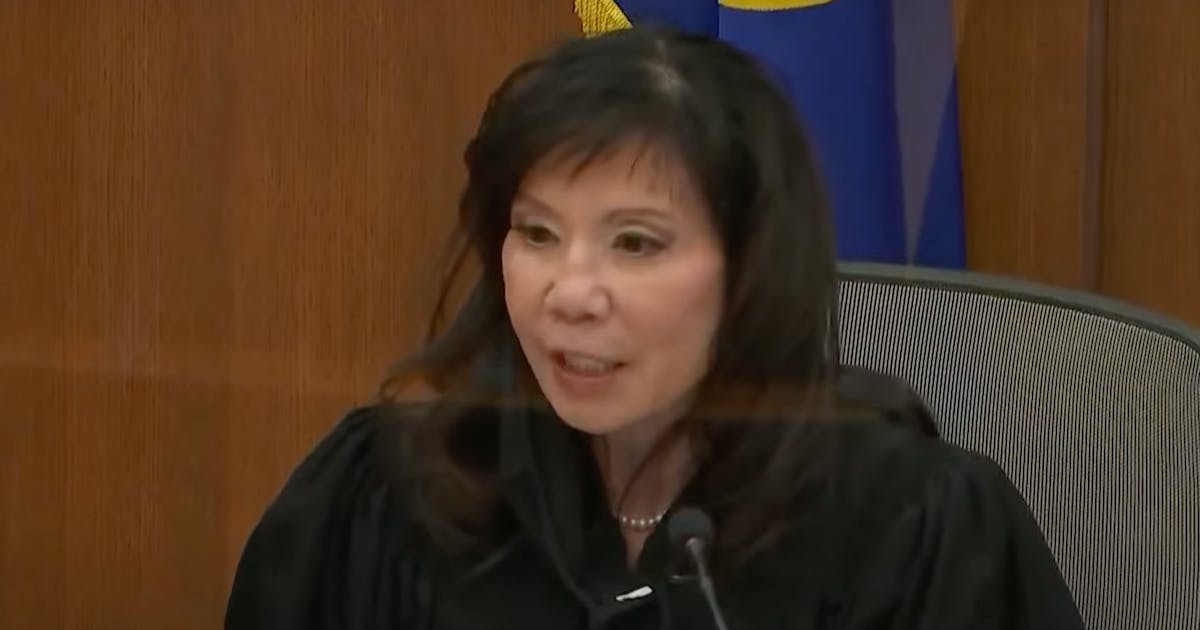 Regina Chu, the Hennepin County District judge who recently presided over the manslaughter trial of fired Brooklyn Center police officer Kimberly Potter, is retiring after two decades on the bench.

The announcement came Thursday from Gov. Tim Walz, along with a call for applicants to fill the job.

Chu submitted her resignation letter to Walz on Feb. 15, three days before she imposed Potter’s prison sentence for the shooting death of Daunte Wright. Her last day on the bench will be May 6.

“It has been the best job of my life,” Chu wrote. “I will be eternally grateful to have been given this opportunity to serve.”

Chu also expressed admiration for others who work in the Fourth Judicial District, adding, “Faced with the pandemic, the clerks, deputies, probation officers, public defenders, prosecutors and judges … stepped up to the challenge, and our courts remained open to the public, trials continued, and cases progressed.”

The 68-year-old Chu could have sought reelection in the fall, and if victorious, the state’s mandatory retirement age for jurists of 70 would have meant her departure from the bench by July 2023, barely 1 1⁄2 years into the six-year term.

Chu became the first Asian-American female district judge in Minnesota, when she was appointed by Gov. Jesse Ventura in 2002. She was elected in 2004 and reelected twice.

Chu gained widespread local and national attention as the judge in the globally livestreamed trial of Potter, who was convicted in December and sentenced on Feb. 18 for the killing of 20-year-old Wright in April 2021.

The trial ended with jurors convicting Potter of first- and second-degree manslaughter for fatally shooting Wright as he tried to flee a traffic stop when she intended to use her Taser. Chu sentenced Potter to a two-year term, much lower than suggested by state guidelines. That meant 16 months in prison and the balance on supervised release. The sentence was widely condemned by Wright’s family and their supporters.

State guidelines called for a term between about six years and roughly 8½ years for first-degree manslaughter for a defendant like Potter, who had no other criminal history. The presumed term was a little more than seven years.

During sentencing, Chu called the trial “the saddest case in my 20 years on the bench.” She went on to ask everyone to “please try to empathize with Ms. Potter’s situation.”

Eventually wiping away tears, Chu said: “Officer Potter made a mistake that ended tragically. She never intended to hurt anyone.”

Wright’s family and attorneys angrily condemned Chu after the sentencing, saying the judge had been wrongly persuaded by Potter’s often teary expressions of remorse. Wright’s mother, Katie, accused Chu of being manipulated by an emotional performance from Potter that was coached.

Six months into joining the bench, Chu said in an interview with Minnesota Lawyer magazine, “I am enjoying it even more than I thought I would. It is very challenging, especially learning a new area of law. I was a civil litigator, and I am now doing only criminal cases. … I find criminal law challenging, and I really find it fascinating.”

Asked why she sought a judicial appointment, Chu said, “The opportunities for doing good and being a positive influence and doing justice was, to me, an attractive and compelling reason to want to be a judge.”

In the run-up to Chu presiding over Potter’s trial, protesters gathered outside the downtown Minneapolis building where they believed she lived and advocated for her to allow the court proceedings to be livestreamed.

One of the demonstrators, Cortez Rice, livestreamed himself on Nov. 6 standing outside the door of a 12th-floor condo and making several demanding statements that led to him being charged with tampering with a judicial officer, a felony.

Chu told police that she believed that the intention of Rice and the others “was to intimidate her and to interfere with the judicial process,” the criminal complaint read.

Judge William H. Leary III, however, dismissed the case, saying the prosecution failed to prove that Chu was placed in reasonable fear of substantial bodily harm to her or her family, or that Rice could be expected to cause emotional distress.

Before joining the bench, Chu was an attorney in private practice in Minneapolis and a special assistant attorney general in Minnesota from 1981 to 1984. She clerked for state Supreme Court Justice Douglas Amdahl and earned her degree from the William Mitchell College of Law in St. Paul after receiving an undergraduate degree from the University of Minnesota.

She has been vice chairwoman of the Lawyers Professional Responsibility Board and was president of the state chapter of the National Asian Pacific Bar Association.

Back in 2005, Chu became a defendant when she was cited for drunken driving after hitting the garage door at her apartment complex in downtown Minneapolis. Her blood-alcohol content was 0.13% two hours after the incident, above the legal limit at that time in Minnesota of 0.10%.

She was sentenced to 30 days in the workhouse on the misdemeanor fourth-degree drunken-driving charge. The court stayed 28 of those days and ordered her to perform 16 hours of community service in lieu of the remaining two days. She also was fined $300 and ordered to pay a $63 surcharge.