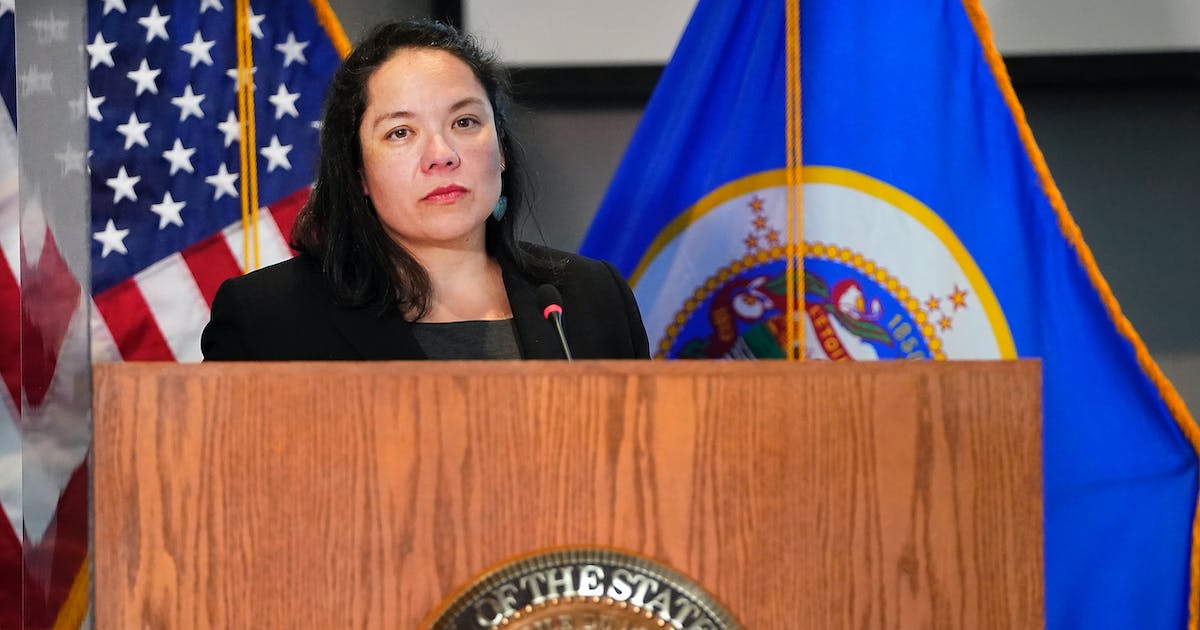 The Minneapolis Police Department has engaged in a pattern of racial discrimination in violation of the state’s civil rights law over the past decade, enabled by several political administrations failing to hold problem officers accountable, according to a scathing report published Wednesday by the Minnesota Department of Human Rights.

During a two-year investigation, the Human Rights Department found that Minnesota’s largest police agency stops, searches, arrests, uses force against and kills people of color — especially Black people — at starkly higher rates than white people, according to the 72-page report.

City and Police Department leaders have long been aware of the pattern of discriminatory behavior, which undermines Minneapolis’ public safety system, the report found. “Yet, these leaders have not collectively acted with the urgency, coordination, and intentionality necessary to address racial disparities to improve public safety.”

Instead, the city’s systems for holding police officers accountable for misconduct have remained “insufficient and ineffective,” according to the report. And the Police Department has continued to emphasize paramilitary training that results in officers “unnecessarily escalating encounters or using inappropriate levels of force.”

The Human Rights Department will work with Minneapolis officials to negotiate the terms of a court-enforceable consent decree, said Human Rights Commissioner Rebecca Lucero, who called an agreement of this nature “unprecedented” in Minnesota.

The investigation “paints an unsettling picture of the city of Minneapolis and the Minneapolis Police Department engaging in a pattern of racial discrimination over the past decade,” Lucero said. This pattern is “unlawful and harms everyone” and is “sometimes costing community members their lives.”

“They made me sick to my stomach,” said Frey, who holds ultimate authority over the Police Department’s operations. Frey said the city has at times failed to follow through on recommendations to improve accountability in the Police Department. “This time it needs to be different,” he said.

Interim Police Chief Amelia Huffman said the department has made changes over the past two years, and police officials will review the report to “ensure we have a clear understanding of every issue that was raised.”

“We have challenges ahead, but I am confident that there are men and women in the Minneapolis Police Department who have the desire to meet the challenges of today and tomorrow,” Huffman said.

In a statement, Sherral Schmidt, president of the Police Officers Federation of Minneapolis, acknowledged the findings, saying: “We look forward to examining the evidence that was used to come to their determination so we can move forward as a department. We are committed to moving forward in a way that addresses identified issues head on, and restores the community’s faith in those who are entrusted with public safety.”

Former Minneapolis police chiefs Medaria Arradondo, Janeé Harteau and Tim Dolan, who helmed the department from 2010-2021, could not be immediately reached for comment.

Lucero opened the investigation on June 1, 2020, days after former Minneapolis officer Derek Chauvin murdered George Floyd by kneeling on his neck for more than nine minutes.

The style of violent policing Chauvin used on Floyd fits into a larger pattern illustrated in the human rights report.

From 2010 to 2020, 63% of police use-of-force events were against Black people — despite Black residents making up 19% of the city’s population, according to the report. Minneapolis officers were almost twice as likely to use neck restraints on Black individuals than white ones in response to the same type of behavior. Of the 14 people killed by Minneapolis police in the 10-year period, all except one were Black or Native American.

Police from precincts across the city pulled over and searched drivers of color more frequently than white ones, the report found. Some officers and high-level officials “simply assume that people of color are more likely to have weapons and drugs in their vehicles,” according to the report.

Police data also shows Black individuals are disproportionately cited for disorderly conduct or obstruction of the legal process “when officers are annoyed with or displeased with a community member’s reaction or response to a police officer’s presence,” the report found.

The report said that Black community members colloquially refer to these citations as the “Black Tax.”

In one case, an officer posed as a Black community member to send a message criticizing the local NAACP. None of the messages appeared to have a genuine purpose related to public safety — and many were deleted without explanation in the winter of 2021, after being uncovered in the state’s civil rights probe.

Department policy requires a supervisor to approve the creation of such accounts, as well as that each one be registered with the commander of MPD’s Strategic Information Center. However, MPD failed to inventory at least two dozen accounts created and operated by its employees.

The report found that MPD employees regularly use racist, misogynistic and disrespectful language, including referring to Black individuals with the n-word and as “monkeys” and calling Black women “Black bitches” and Somali men “orangutans.” Police also used other derogatory terms for women. When investigating a sexual assault case, one officer falsely stated that a man could not be guilty of sexually assaulting a woman if they had children together, the report said.

Hennepin County prosecutors told investigators they struggle to rely on officers’ body-worn camera video “because of how disrespectful and offensive MPD officers are to criminal suspects, witnesses and bystanders.”

State investigators also found that racial slurs and sexist remarks are commonly used against fellow officers, who rarely report the misconduct, the report says, because they fear retaliation and don’t believe their colleagues will face discipline.

Police training is insufficient, resulting in problematic tactics, while reinforcing a “warrior mindset,” despite Frey announcing a ban on warrior-style training in 2019. Officers regularly expressed a lack of confidence in department policy, saying changes were frequent and not well communicated. Others said they did not understand the use-of-force policies.

Supervisors are also not adequately trained, the report said, leaving them without the tools to hold problem officers accountable.

The civilian-led Police Conduct Oversight Commission is treated with mistrust and “lacks the appropriate resources and capacity to do its work.” The city only refers a small number of cases to the review board, and only closed ones, leaving the commissioners in the dark about complaints dismissed prior to the investigative process.

A failure to address police misconduct in a timely fashion also contributes to an inadequate accountability system. Over a 10-year period, it took on average 475 days for the police chief to issue a final disciplinary decision from the time an investigation began. In some cases, officers were not reprimanded for years. Under current MPD policy, supervisors are not informed when an officer under their command is being investigated.

When the Human Rights Department began its inquiry in June 2020, Arradondo had at least 65 completed discipline files on his desk awaiting review, including four that had been ready for action for more than 200 days. The lag time means that even before the chief issues a final decision, the officer may be promoted to field training officer or supervisory role, “where they have the potential to train other officers to use the same racially biased methods of policing,” according to the report.

And even when complaints result in findings of misconduct, MPD does not consistently hold officers accountable. Less than 40% of cases referred for coaching between 2014 and 2018 resulted in any corrective action, the report found.

The Human Rights Department reviewed approximately 700 hours of body-worn camera footage and nearly 480,000 pages of documents, including training materials, policies and procedures, disciplinary records, internal and external communication and correspondence and MPD’s covert social media accounts, according to the report. Investigators also observed the 2021 MPD Academy training for new officer hires and completed ride-alongs with officers in each of the city’s five precincts. The department crafted its findings after consulting with policing experts and interviewing police officers and supervisors up the chain of command, along with elected officials and city staff.