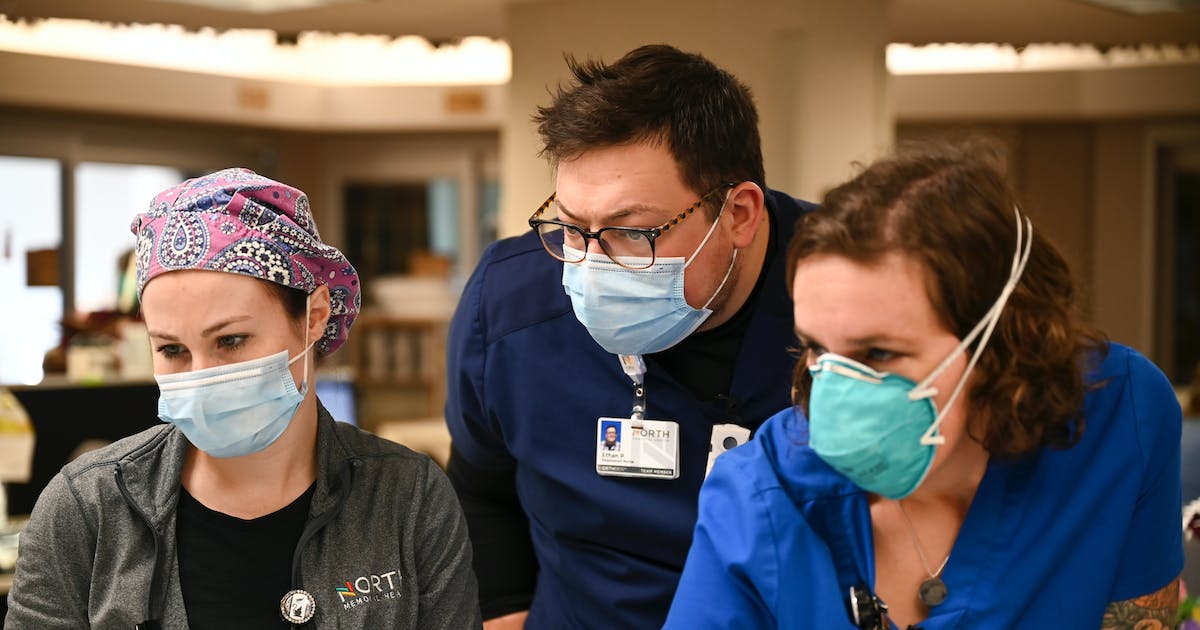 After a bruising two years of the COVID-19 pandemic, Twin Cities hospitals and nurses agree on at least one thing amid contract negotiations — they’ve got to figure out how to attract and keep nurses.

Retention is a dominant concern for hospitals posting hundreds of job openings and the Minnesota Nurses Association (MNA) union, which is down nearly 2,000 members since the start of the pandemic, according to federal filings.

“We have had [temporary] travel nurses stay for six to 12 months and we still can’t staff the hospital,” said Tracey Dittrich, a Children’s Hospital nurse. “In the ER, if not for travelers right now, it wouldn’t be safe.”

Solutions vary, leaving plenty of negotiating ahead of May 31, the end of the nurses’ current three-year contracts. Bargaining sessions have taken place over the past month for about 12,500 hospital nurses in the Allina, Children’s, Fairview, North Memorial and Park Nicollet systems. Talks are underway for 2,500 nurses working at St. Luke’s and Essentia hospitals in Duluth as well.

Hospitals had hoped across-the-board pay bumps alone would reduce stress and bring a quick end to negotiations — as they did in 2013, nurses said. The union countered with a variety of benefit and staffing proposals, asking Allina, for example, to repay student loans over three years in exchange for guarantees that those nurses would then stay on for at least another two years.

One challenge is that veteran nurses in the union value pay raises and seniority but younger nurses want work-life balance and won’t tolerate the worst shifts all the time, said Mary Turner, MNA president and a veteran intensive care nurse at North Memorial Health in Robbinsdale.

“They are not going to stay 25 years to get those extra benefits,” she said. “That’s another huge reason why we had to go to the table. We’ve got to start getting our contracts to look more attractive to our younger nurses.

“Having more than one day off. Not having to rotate day, night, day, night three times in one week. We don’t want to miss our chance to fix some of that.”

Contract talks resolved three years ago without any walkouts, but more than 4,000 Allina Health nurses went on two strikes for a collective 44 days in 2016 over health insurance. A one-day strike by nurses at several Twin Cities systems occurred in 2010 when nurses demanded strict staffing ratios but settled over pension and health benefits.

Temporary staffing advertisements already have popped up on national websites as Twin Cities hospitals plan for the worst-case scenario of a strike at a time when temporary nurses are in short supply and demand high wages.

Neither side has proposed specific wages or increases yet. Recruitment and retention are key issues, said a joint statement from all of the negotiating hospitals other than Allina, which is maintaining its own communications during the talks.

“The recruitment and retention of all health care workers is an ongoing part of day-to-day hospital operations and it is always an important topic of discussion,” the statement said. “We’ve begun to discuss ideas and strategies during these talks. We expect these discussions to continue in the coming sessions.”

Staffing numbers declined during the pandemic, as nurses encountered a fast-spreading coronavirus along with initial shortages of protective gear and later hostile patients and families demanding unproven treatments. The Minnesota Department of Health documented 48,946 COVID-19 cases among health care workers, including 47 deaths, until it stopped keeping track last fall.

State hero pay bonuses of $1,500 were proposed months ago, but lawmakers divided over whether to reward nurses and front-line workers for their roles in the pandemic or to grant broader tax relief. A $750 compromise was tentatively announced by state lawmakers on Thursday.

The union’s contract proposals request up to $10,000 recognition payments for nurses who worked during the pandemic, along with opportunities for mental health support and paid sabbaticals to address burnout. However, nurses in public statements have been trying to pivot away from the pandemic as the source of their demands.

“To a certain degree, the hospitals are counting on us to be too tired to ask for more than wages,” said Kelley Anaas, an ICU nurse at Allina’s Abbott Northwestern Hospital in Minneapolis. “Contract negotiations are not just about the money. It’s about a lot of issues that nurses have known about for a long time going on inside hospitals that the pandemic only pushed further to the forefront.”