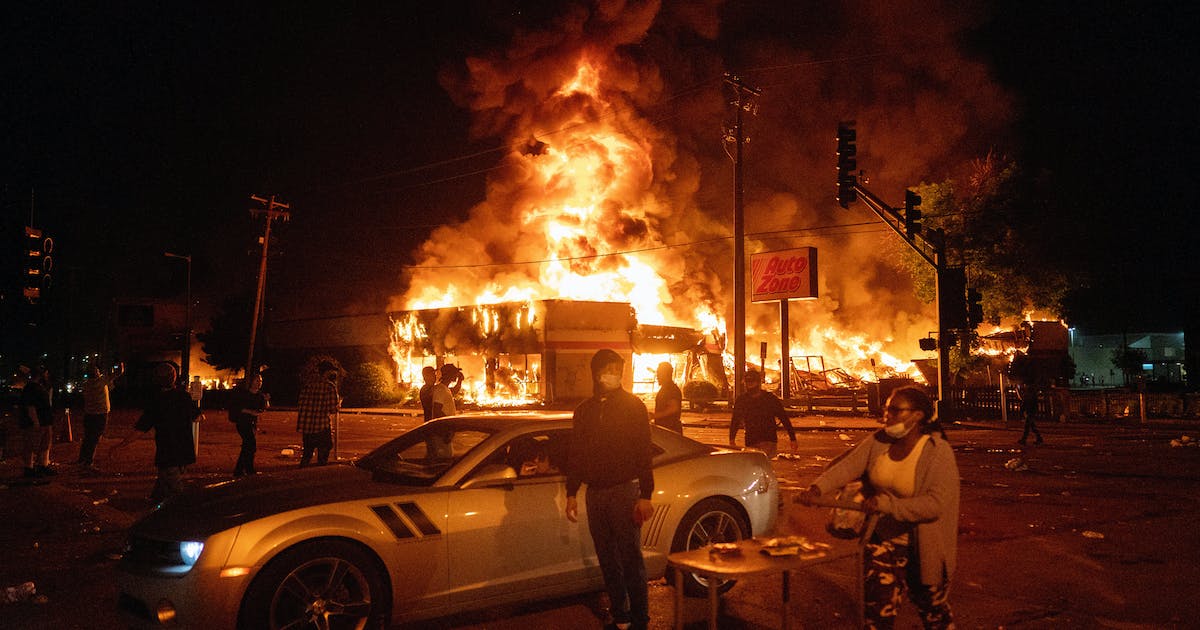 State and local law enforcement didn’t act quickly enough to coordinate after riots broke out in Minneapolis after George Floyd’s killing and response teams lacked “clear, experienced” leadership during the unprecedented level of destruction, according to an external review of the state’s response.

The after-action review of the unrest that broke out in May and June 2020 painted a picture of state and city leaders caught off guard by the widespread riots, looting and arson that spread through Minneapolis and St. Paul and confusion over who should take the lead. At times, law enforcement failed to distinguish between peaceful protesters and violent demonstrators in deploying munitions.

“Although these state-level entities were better equipped to respond to this particular crisis than local jurisdictions due to their training, equipment, and number of officers, they did not have experience responding to a large-scale civil disturbance and extended period of civil unrest such as what occurred in Minneapolis after Mr. Floyd’s murder,” read the report released Thursday morning.

The 129-page report from Wilder Research was contracted by the state Department of Public Safety in February 2021 to “objectively evaluate what the state did well and did not do well.” The report also outlines recommendations to respond to possible future unrest.

The state eventually helped quell the unrest by deploying resources from state troopers and DNR conservation officers across the state, while coordinating with the Minnesota National Guard and local law enforcement, according to the report. They quickly blocked off key highways to help control and disperse crowds.

But that level of coordinated action started too late, according to the review. State officials initially played a supporting role, expecting the city of Minneapolis to take the lead. After the Third Precinct was abandoned and set on fire, the state stepped in and took the lead coordinating the response.

The state’s move to take over in place of the city is typically “not the best practice,” but it was “necessary in this instance,” according to the report. “The MACC [Multi-Agency Command Center] could have been set up earlier to prepare for a potential coordinated response.”

Early on, the state’s coordinated effort also suffered from lack of a clear and unified command structure and “insufficient” engagement from Minneapolis police. The report’s authors cited a need to improve the timeliness of the deployment of the Minnesota National Guard, which must be requested by city leaders.

“Previous emergency management planning in Minnesota was centered on natural disasters. The unplanned and unprecedented nature of the events cannot be overstated,” read the report. “A planned response to an event of this scale would have looked much different.”

The report also detailed how the various law enforcement agencies deployed different strategies to respond to crowds that sometimes worked against each other. Minneapolis police would disperse crowds that other agencies were trying to contain, according to the report. Agencies also disagreed about the use of chemical munitions.

“I recognized other behaviors that were concerning to me like the MPD’s use of chemical munitions,” an unnamed state official said in the report. “When they came to me and asked for additional chemical munitions, because they were running out, I told them no. I wasn’t willing to do that because I didn’t feel like their use of it was judicious and appropriate.”

The report contains similar critiques to the riot response as Minneapolis’ after-action report, published three weeks ago. That investigation, conducted by Maryland-based risk management firm Hillard Heintze, found a breakdown in communications and planning left residents feeling abandoned and city employees — including police — confused about who was in charge.

Messages were left seeking comment from the Minneapolis Police Department and City of Minneapolis.

“The unrest and rioting in May-June 2020 were unexpected and unprecedented in terms of size, scale, types of acts, and duration,” Public Safety Commissioner John Harrington wrote in a letter to Gov. Tim Walz dated March 30.

Both Walz and Harrington used the report’s release to urge passage of the governor’s public safety budget recommendations, which include $300 million for public safety funding for local governments and $500,000 for Harrington’s department to train local elected officials “on initiating the emergency response and requests for state coordination and assets.”

Walz spokesman Teddy Tschann said the governor has reviewed the report’s recommendations and Harrington’s update on how his department has responded so far. He echoed the need for the Legislature to “pass the Governor’s plan to improve the State’s ability to respond to civil unrest.”

Harrington wrote that the Department of Public Safety conducted its own internal reviews of law enforcement responses to civil unrest, including the April 2021 unrest in Brooklyn Center that followed the police killing of Daunte Wright.

The commissioner noted that his department has meanwhile contracted with an independent consultant called 21CP Solutions “to assist us with a report and technical support on working with both the established media and others who report on civil unrest.”

The U.S. Department of Justice and Minnesota Department of Human Rights are meanwhile still conducting separate sweeping reviews of the conduct of the Minneapolis Police Department.

Read the report below: