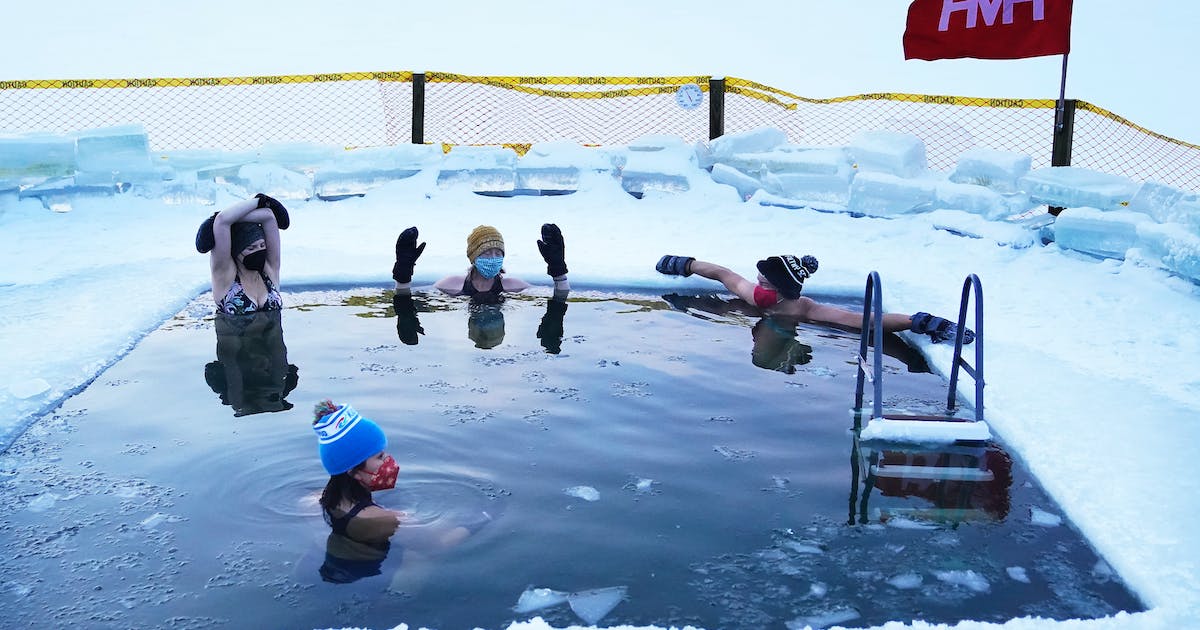 The people who immerse themselves in an ice hole in Lake Harriet every day of the frigid Minneapolis winter call it “magic.”

The icy dip gives them time to meditate and commune with nature, an excuse to take a break from the kids, to howl at the moon, to start the day with a feat of grit and induction into a social circle with an unfailingly positive WhatsApp group chat.

Swimmer Nicholas Garbis describes the physical sensation of remaining submerged several minutes as “borderline hypothermia.” “Your blood moves from the surface inward,” he said. “All the veins and arteries constrict and they leave like a few millimeters of your tissue there that serve as your own personal neoprene, essentially.”

For many who dip in the ice holes of Lakes Harriet and Cedar, friends and family don’t always understand what would possess someone to endure such extremes. But researchers want to know more about the benefits that keep the regulars coming back.

In January Dr. Kaja Plucinska of Rockefeller University’s Cohen Laboratory of Molecular Metabolism gave the group a presentation on current research on brown fat — a type of body fat located in the deep neck area that produces heat and burns calories in cold conditions.

“Controlled exposure to cold such as ice water dips or cold showers has been linked with improved health and well-being,” Plucinska said in a statement. “A wealth of anecdotal evidence suggest a number of health benefits in individuals practicing exposure to environmental cold, including reduced inflammation, improved blood flow, reduced fat mass and overall improved metabolism.”

The Rockefeller researchers are investigating the presence of blood biomarkers of brown fat in young New Yorkers, using a cooling vest, in hopes of using brown fat as a means of predicting cardiometabolic health. That study requires validation in a larger group of people, which is where the Minneapolis ice water immersion group — with its mixed-gender and -age cohort — comes in.

Starting this summer, the researchers will collect blood samples from polar swimmers who dip at minimum twice a week for a month in winter. They aim to profile different classes of blood-signaling molecules in the polar swimmers during summer and winter, as well as in a control of group of people who do no repeated cold exposure at all.

“Given that brown fat was not discovered in adults until 2009, we’re in the very beginning stages of this, and so I think the possibilities of what they discover are going to be incredibly fascinating,” said Rachel Banks Kupcho, a Richfield school board member who recently celebrated her one-year dip-anniversary of entering the “Harriet Magic Hole.”

Banks Kupcho is also curious about the intersection of race and activation of brown fat. As an American Indian with potential genetic precursors to health conditions like diabetes and hypertension, she said she wants to learn if cold water immersion can fit into the growing movement in the Native community around returning to a traditional diet and other wellness reclamation practices.

“I’m hoping there is a way for our Native community to claim this as an activity because I do believe that is also something that we used to do,” she said. “There’s something there, from a blood-memory standpoint, that feels very familiar.”

Thuy Anh Fox, whose family moved from Vietnam to California, does not believe her forebears would have done anything like her daily winter pilgrimage to Lake Harriet.

For her, ice dipping was a progression that came of reading about the Dutch extreme athlete Wim Hof, aka the Iceman, who promotes cold therapy. It was also something of a coping mechanism for stress that she adopted after the murder of George Floyd, civil unrest and a pandemic that had forced her two young children into distance learning and trapped everyone in their homes.

“At that point in time, like December 2020, there was very little that I felt that I was getting right,” she said. “It is certainly a way to get out of the house. It’s something to do for ourselves, but now we go because it’s fun. We go because we’ve made friends and it’s a part of our day and it’s a way to embrace winter.”

The anecdotal psychological benefits inspired Theodore Stewart-Franzen, a St. Mary’s University doctoral student who also dips daily in the Harriet Magic Hole, to base his dissertation on the relationship between cold immersion and mental health.

Starting this December, he plans to survey 70 ice dippers and a corresponding control group over a three-month period about their responses to anxiety, depression, work-related and interpersonal stress. He hopes the results will have clinical utility for trauma therapists.

Personally, ice dipping has given him increased mental acuity and concentration, Stewart-Franzen said. “That’s tied into starting the day with something hard,” he said. “Cold exposure is a way to strengthen the muscle of … doing something in the present that really sucks, but you’re confident is going to benefit your future self. And if you can do that, then you can choose not to binge the TV or eat that extra cupcake or not hit snooze on the alarm. Right. It’s like doing those things in the moment that are slightly less pleasant so that you can inherit better choices.”

The polar swimmers are permitted with the Minneapolis Park Board through Endurance United, a St. Paul nonprofit focused on getting people involved with a healthy outdoor lifestyle. Dippers have to sign liability waivers. According to that waiver system, about 1,000 ice dipped at least once in Harriet or Cedar since December 2021.