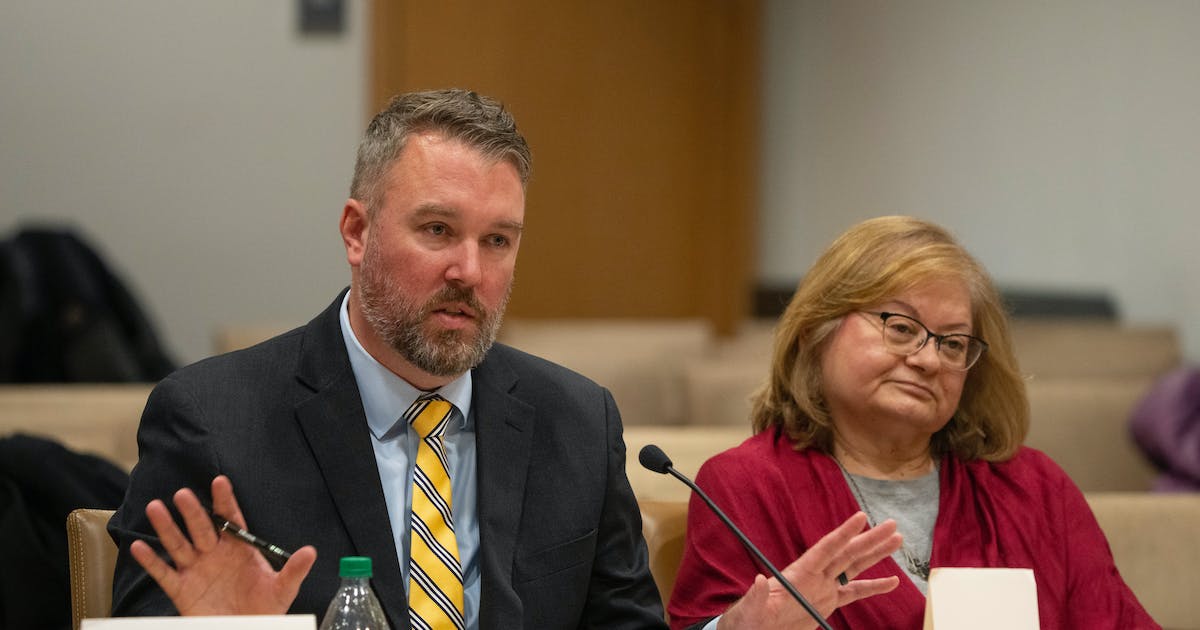 The chairman of the Senate Education Committee questioned Wednesday whether the Minnesota Department of Education did enough soon enough to stop possible fraud from groups seeking hundreds of millions of dollars in government reimbursement for a program to feed needy children.

During a nearly two-hour hearing at the Capitol, Sen. Roger Chamberlain, R-Lino Lakes, said the department balked at taking tougher action as far back as 2018, when the St. Anthony nonprofit Feeding Our Future first applied to be sponsor in the meals program.

Chamberlain said the department approved Feeding Our Future’s application even though the nonprofit had “no financial history” and another sponsor raised concerns about its “character and integrity.”

“Obviously, something failed, correct?” asked Chamberlain, the assistant majority leader in the Senate.

Wednesday’s hearing was the third one this month, questioning the state agency. News first surfaced in January about the FBI’s investigation into Feeding Our Future and a broader “large-scale scheme” to defraud the government.

“We raised concerns about the unexplained growth in the summer [of 2020] with USDA and we escalated those concerns to the Office of the Inspector General,” said Daron Korte, the department’s assistant commissioner who oversees the nutrition programs.

Korte said the department had no evidence of criminal fraud until the FBI unsealed search warrants in January alleging that Feeding Our Future and some of its prime contractors stole at least $48 million from the meals program. So far, a federal grand jury hasn’t charged anyone with a crime related to the case, and Feeding Our Future Executive Director Aimee Bock has denied any wrongdoing.

Records obtained by the Star Tribune show that the Education Department received an e-mail in 2018 from the former director of another meals program sponsor alleging that someone had “forged” the signature of one of the board members, Kara Lomen.

“Kara Lomen has reviewed the Articles of Incorporation and By-Laws and states that her signature on those forms was forged,” Twait wrote in the e-mail. “When I first contacted [Lomen] about dissolving Feeding Our Future, she was unaware that she was even on the Board of Directors. To this end, she has filed a formal complaint with the Minnesota Attorney General and the IRS.”

Twait sent the e-mail to Jeanette Johnson-Reed, then a supervisor overseeing the meals programs at the Education Department. In her response, Reed suggested that Twait work with Bock to resolve the dispute.

“Unless there is a conviction for any business related offense; or the organization is no longer in good standing with the IRS, I prefer not to be kept informed of developments related to the dispute,” Reed said in her e-mail to Twait.

“I do recall receiving a letter from another sponsor,” Korte said. “I can’t remember if they were specifically pointing to FOF [Feeding Our Future].”

“We offered to appear before Senator Chamberlain’s committee but he refused our appearance and the opportunity to discover the truth,” Udoibok said.

Chamberlain also pressed the Education Department on its decision to approve dozens of Feeding Our Future subcontractor meal sites and resume payments to the organization in 2021 despite finding it “seriously deficient.”

Those actions kickstarted the flow of millions of federal dollars, much of it fraudulently obtained, the FBI now alleges.

“Why would you continue to work with them if there were suspicions that there were problems?” Chamberlain asked.

Korte said the department “had no choice” but to keep funding the group after it met the terms of a corrective action plan. He said payments to the group resumed after a state court judge indicated at a hearing in April 2021 that he would likely rule against the department’s decision to withhold funding to Feeding Our Future.

Chamberlain noted that the state could have appealed the decision to a higher court if the department had asked for a written order.

“I can’t speak to legal strategy,” Korte said. “Even if we did take an appeal, it would have taken another six to nine months to get a decision from the Court of Appeals. It wouldn’t have helped us at the time we actually needed it.”

Wednesday was the third hearing involving Education Department leaders this month. Education Commissioner Heather Muellertestified April 4, and Chief Financial Officer Denise Anderson faced similar questions April 6. Both leaders reiterated that the state agency’s monitoring prompted it to cut off funding to Feeding Our Future, until a judge ruled the department had to resume payments.

Four more Education Department employees are expected to testify May 4.

“Something went wrong, and we’re just simply trying to find it,” Chamberlain told the education leaders.

He said in an interview afterward: “I don’t think they have solid internal controls.”

Chamberlain has blamed the lack of site visits on the pandemic, saying that if the department had gone to the meal distribution locations, it would have given some “basic accounting” of whether meals were served.

The site visits weren’t as relevant during the pandemic, Korte said, when some organizations were delivering meals to homes. In the end, Korte said, site visits aren’t used to uncover fraud but rather to ensure compliance with federal regulations.

“It’s hard to say in retrospect whether or not something like that would have changed anything,” Korte said. “I believe our staff did everything in our power to slow the growth of these programs.”

Monica Herrera, the director of the nutrition division, which approves site applications, told senators Wednesday that her division has 52 employees who work with 2,000 meal program sponsors, which partner with more than 10,000 sites.

“Sponsors,” such as school districts and nonprofits including Feeding Our Future, apply to the Education Department and may contract with multiple sites where food is distributed such as community centers. It’s up to sponsors to oversee the paperwork and reimbursement claims for its sites.

Chamberlain said this month’s hearings could result in recommendations to boost oversight of the Education Department and the state’s nonprofits.