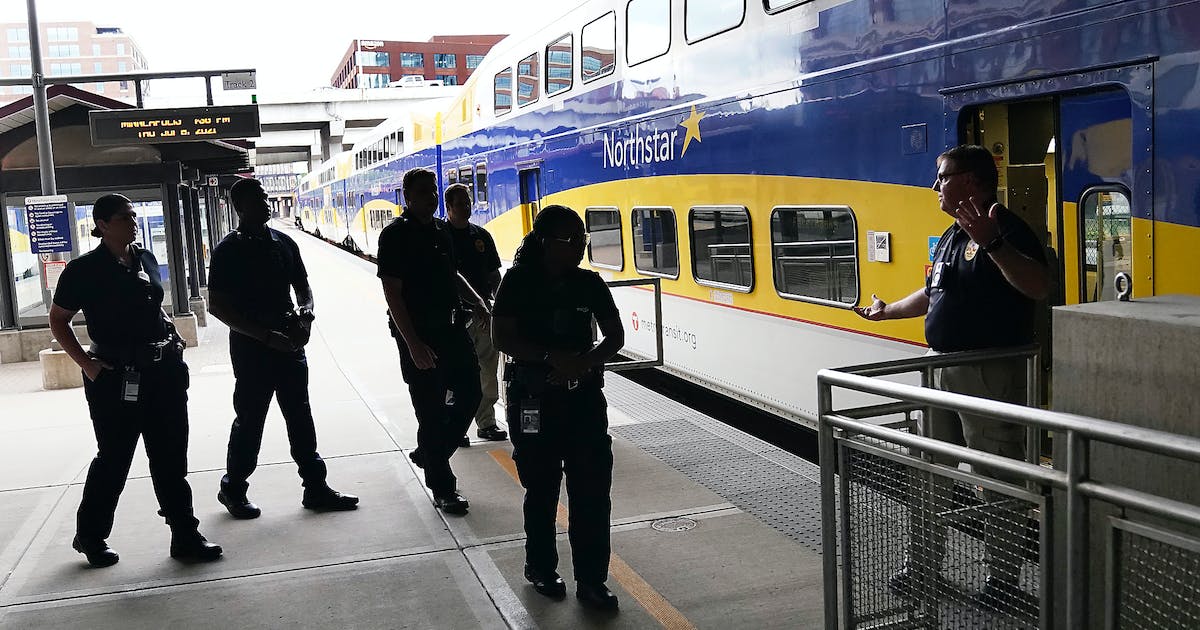 Metro Transit officials vowed last summer to hire more police officers and deploy dozens of community service officers to help those in need and ward off trouble on the system’s buses and trains.

Those beefed-up efforts to ensure safety on public transportation were expected to take hold by this July, in tandem with metro residents returning to their workplaces as the COVID-19 pandemic eases.

Then the real world intervened. A severe shortage of job applicants, an exodus of police officers following the death of George Floyd and legislative inertia at the State Capitol have slowed Metro Transit’s plans.

“I meet with transit police chiefs from across the country and parts of Europe, and everyone is experiencing the same thing,” Metro Transit Police Chief Eddie Frizell said. After two years of global unrest and the pandemic, he said, people interested in law enforcement as a career may be thinking twice before getting into it.

The number of full-time Metro Transit police officers is the same as it was when the safety initiative was announced last summer. Eight full-time officers were brought on board since then, but staffing advances have been thwarted by attrition. While the department is authorized to employ 170 full-time officers, only 111 are on the payroll.

Metro Transit officials note a recent uptick of interest in full-time positions with the Police Department, and hope a class of up to 15 recruits this summer will begin work as soon as August.

“Young people coming out of [police] training programs and schools are bright and ambitious,” Frizell said. “They want to serve.”

The use of community service officers (CSOs), also called transit ambassadors, has taken hold nationwide as transit agencies struggle with increased crime on buses and trains and try to recoup ridership lost during the pandemic. While Metro Transit ridership has steadily risen in the past year, it is still about half of pre-COVID levels.

Similar programs in other cities — including San Francisco, Seattle and Boston — have popularized much quicker than in the Twin Cities, and with generally good results. The additional personnel, advocates say, increase a sense of safety for passengers.

Metro Transit has an established community officer program where CSOs — students who are enrolled in law enforcement programs — check fares, connect passengers or those on the streets with mental illness to services, and call transit police should trouble arise.

While 70 CSOs were expected by this summer to patrol Blue and Green line trains, bus-rapid transit, stations and platforms, only eight new CSOs have been hired since the safety program was rolled out in July. There are just 15 CSOs working the Metro Transit system.

To lure prospective applicants, the Metro Transit Police Department is offering a $4,000 hiring bonus to new full-time officers, and have made CSOs eligible for the department’s benefits package.

“Every department is trying to deploy a strategy to get young people to apply, like opportunity tracks such as the CSO program,” Frizell said. “It is very competitive.”

Metro Transit wants the penalty for fare evasion changed from a misdemeanor to an administrative citation like a parking ticket, a move that would permit CSOs as well as police to cite violators. This, they contend, would free police officers to concentrate on more serious crimes.

But the effort has languished for two years at the Legislature, and its fate this session remains uncertain.

The current system for collecting a $180 fine for nonpayment of a $2.50 transit ticket is inefficient, officials say. And Metro Transit rarely sees that revenue because the cases are rarely prosecuted.

An audit by the Metropolitan Council in 2020 found that less than 3% of the fare-evasion citations issued by Metro Transit police resulted in a fine being paid. Such cases typically are dismissed because the person cited doesn’t appear in court, prosecutors fail to proceed or the matter is assigned to a collection agency.

“Doing nothing is not helping make transit safer,” said Rep. Jon Koznick, R-Lakeville, another co-sponsor of the House bill.

Faced with these realities, Metro Transit police have tried to bolster safety in other ways.

Staffing has increased at Metro Transit’s Real Time Information Center, where a seven-person team monitors security cameras through much of the day and night, primarily on light-rail trains.

The real-time, high-definition technology throughout the Metro Transit system “helps direct our resources where they’re needed most,” said Frizell, who called the effort “a phenomenal game changer.”