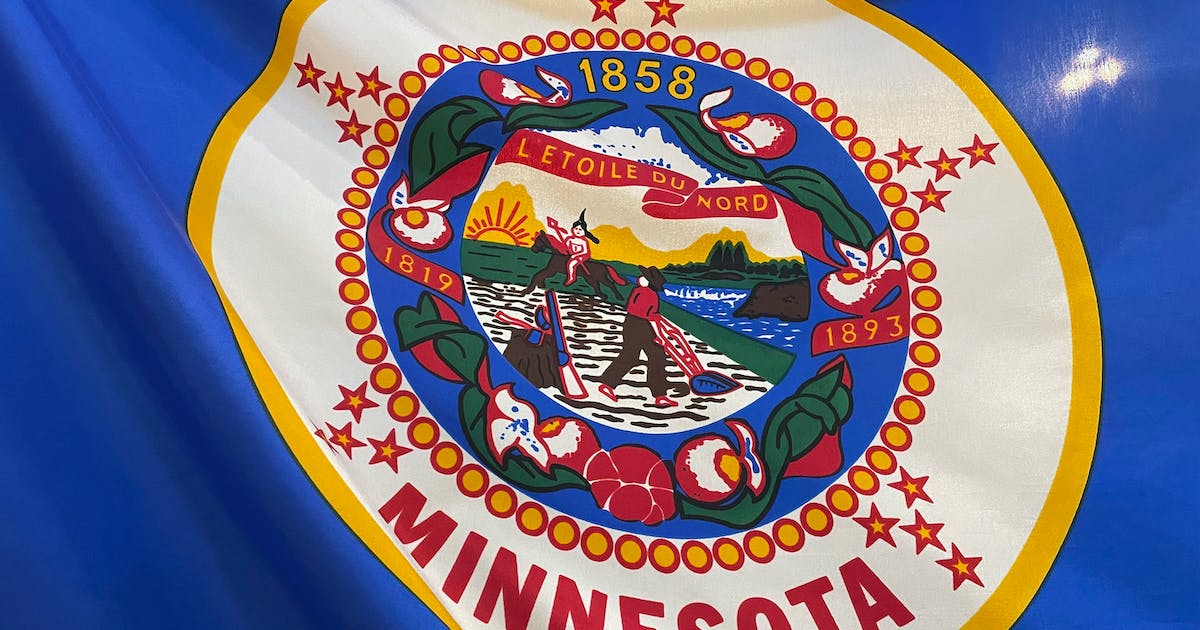 Picture Minnesota’s state flag: the colors, the images, the lettering.

The Minnesota flag — a blue background featuring the state seal, which shows a Native American on horseback riding away from a white settler plowing a field — has long been a source of controversy. Legislators repeatedly have introduced bills aimed at rethinking both the seal and flag, though the measures have stalled in committee or failed to get a hearing.

Rep. Peter Fischer, DFL-Maplewood, started working on the issue after hearing concerns from high school students. The state flag doesn’t meet design standards that scholars agree upon, including simplicity — using just a few colors — no lettering or seals and distinctiveness from other flags.

“When I was growing up, we all used to draw the American flag, but we never did the state flag because how do you draw that?” Fischer said. “You can’t.”

Fischer joined forces with Rep. Mike Freiberg, DFL-Golden Valley, on a bill that would establish a State Emblems Redesign Commission to recommend new designs for the flag and seal.

Other states have taken similar steps, including Massachusetts, where Republican Gov. Charlie Baker last year signed a bill forming a commission on the state’s seal and motto. And across the country — including in Minnesota — debate continues over symbols, statues and art from centuries past.

Those historical images provide a learning opportunity and a chance to move forward, said Sen. Mary Kunesh, DFL-New Brighton, who sponsored the Senate version of the flag and seal bill.

“Some of these depictions are beautiful works of art, and they were created in a place and time and a mindset, but that’s not perhaps the way it is now,” said Kunesh, who is the first Indigenous woman to serve in the Minnesota Senate. “I can appreciate the beauty of the work, and the workmanship, but I don’t appreciate the message that it often sends.”

A House committee on March 22 approved the bill along party lines.

“I do recognize some of the concerns of the imagery that people may have,” said Rep. Jon Koznick, R-Lakeville. “But I think it’s not a priority for the average Minnesotan.”

Rep. Jim Nash, R-Waconia, said there are “101 other things that we need to be tackling right now,” including tax cuts and replenishing the Unemployment Insurance Trust Fund.

“We’re basically all hands on deck to make sure these bills that are critical to Minnesotans get tackled,” he said. “This is not one of those efforts.”

But Fischer said he believes this is the right moment and if the bill is unsuccessful this session, lawmakers will try again.

“You can always find excuses to wait,” he said. “It takes courage to say, ‘Now is the time to do it,’ even though some people may not think it’s popular.”