Spring cleaning in the Camden neighborhood of Minneapolis 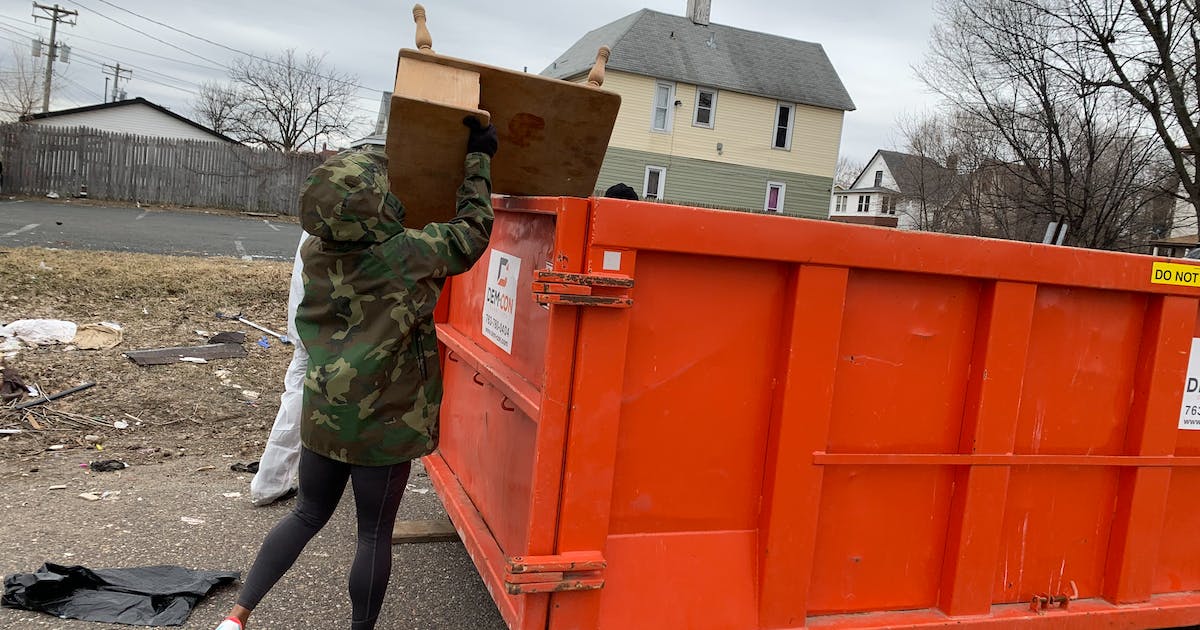 As the snow melted, drifts of another sort started accumulating behind the old Camden Park State Bank building.

New piles seemed to appear every time Anissa Keyes stepped outside. Dumped by strangers in the night who look at the grand old building she is renovating and see nothing but a dump site.

“This is our sad reality,” she posted on Facebook last month. “After only a few months, I have spent thousands of dollars removing trash, putting up security cameras and renting dumpsters, still ending up with fines because I can’t get the trash up faster than people dump.

“Don’t get me wrong,” she added, along with a request for prayers. “I love a challenge and I love my community. But this is getting a little frustrating.”

Keyes see something very different when she looks at the century-old redbrick building at the corner of 42nd and N. Lyndale avenues.

The building is part of neighborhood’s history. One of the last structures still standing from the Camden business district that vanished when I-94 tore through north Minneapolis. Over the years, the building has housed everything from a boxing gym to a mortuary.

When Keyes looks at the building she bought last November, she sees this neighborhood’s future. She sees a space she can open to small Black-owned businesses. The kind of businesses her neighbors have to drive to other neighborhoods to find right now.

There will be space for her own business, Arubah Emotional Health Services, and its team of therapists. A law office. A title office. A lash salon. A dance studio. A new restaurant.

Keyes is a healer. This building, she hopes, will be a tonic for the whole neighborhood.

But first, she’ll have to take out the trash.

Bitter winds were blowing other people’s garbage around her parking lot last week as Keyes pulled shovels, gloves and protective suits from her car. A group of young volunteers – her sons and their friends – pulled on the gear and set gamely to work, shoveling soggy, smelly glop into a waiting dumpster that was supposed to be filling with construction debris from the building project.

Once somebody else’s garbage is dumped illegally on your property, their mess becomes your mess.

Even David Herberholz, director of solid waste and recycling for the city of Minneapolis, has found himself confronted with bags of someone else’s junk dumped on his property. And like everyone else, he could report the illegal dumping by calling 311. But he had to clean it up himself.

“I’ve been dumped on,” Herberholz said. But in this city, “the responsibility to get rid of the material is on the property owner.”

The cameras Keyes has installed around the building can at least capture license plate numbers. Some of the dumped garbage includes mail that might lead to fines for illegal dumpers.

But if Keyes can’t keep the property clean, the city must send in a crew from Public Works — and she’s stuck with the bill for their labor.

Minneapolis logged 667 reports of illegal dumping last year — way down from a pre-pandemic peak of 1,078 calls to the 311 line in 2019. There have been 40 calls about illegal dumping this year, and Keyes knows some of them have been from her neighbors.

She’s grateful for the people who call to complain. It means they care.

Last summer, bullets tore into the Clientele Barbershop, around the corner from the bank building, wounding a mother who had brought her little boy in for a haircut, and killing Jaylen Salter, who was just 19 years old. This neighborhood has enough pain of its own without dealing with garbage dumped by strangers.

This neighborhood does care. Minneapolis City Council Member LaTrisha Vetaw, who lives nearby, has picked up a shovel and helped with the cleanup.

“I’m willing to do that, because it’s not OK,” Vetaw said. “She’s doing everything she can to try to keep it clean. There’s no control she has over [whether] someone comes in and dumps in the middle of the night.”

Keyes and her allies are brainstorming ideas to ward off the illegal dumpers. Signs. Spotlights. Patrols. Honking horns to drive home the message that this is a space somebody cares about.

The spring thaw is revealing a lot of garbage in spaces Minneapolis cares about.

For those tackling neighborhood messes, the city will provide free supplies for litter cleanup and graffiti removal. If you visit the Clean City website, you can volunteer to adopt a block, adopt a storm drain, adopt a median, adopt individual trash cans.

Spring is coming, which means spring cleaning is coming. Street sweeping starts this month. So does yard waste collection.

“Residents of Minneapolis do a great job” of looking after their city, Herberholz said.

Right now, Keyes could use as many eyes as possible looking out for her.

“We need all eyes. Oftentimes they dump in places they think people don’t care about,” she said. “We have to show them we care and that we see them.”