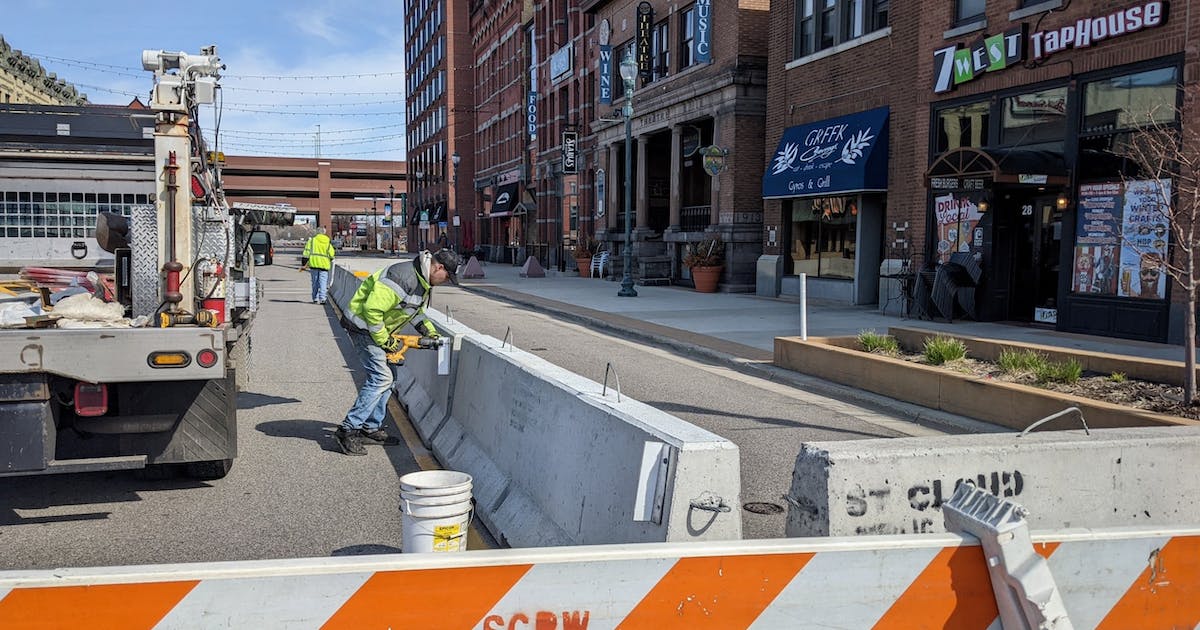 ST. CLOUD — City officials here will allow outdoor dining to spill into downtown streets again this summer as a way to bring people back to the heart of the city.

“It is successful. It definitely helps us out. The [restaurant] is a bit smaller so this almost doubles our seating,” said Jerrick Haws, general manager at 7 West TapHouse on the east side of Fifth Avenue. “It’s been overwhelmingly positive. I don’t think there’s anyone who doesn’t like to sit outside.”

“The nice thing would be to get everyone back downtown as far as offices but with the pandemic, every business is different,” Haws said. “There’s not much we can do but this is a good incentive to have people come back downtown.”

The concrete barriers will be set up through Labor Day, dependent on the weather, said Mayor Dave Kleis. The road will still be open for traffic, but on-street parking will be eliminated on that block of Fifth Avenue, as well as in some areas by restaurants along St. Germain Street, the downtown’s main east-west corridor.

The city closed Fifth Avenue to traffic to allow for expanded outdoor dining in 2020 to support the restaurants as they reopened from state-imposed COVID-19 restrictions. The city installed concrete barriers again last year as a way to continue to support downtown restaurants.

For Kleis, it’s the start of a renewed effort to revitalize downtown.

“Now that we’re coming out of COVID, we want to look at what downtowns are transitioning to,” Kleis said. “Downtowns are changing all over the country. How do we improve capacity now that people are working from home and that’s becoming more permanent?”

Expanded outdoor seating doesn’t help all restaurants equally. Tariq Siddique, who owns Greek Cravings on Fifth Avenue, said about two-thirds of the customers at the Mediterranean and gyros restaurant get food to go.

Although he’s still not back to doing the same amount of business as before the pandemic, Siddique said he hopes to stay open.

“It was hard but we’ve been managing it,” he said.

Not everyone was spared during the pandemic. The downtown location of House of Pizza is listed as temporarily closed; owner Brandon Testa also runs locations in Sartell and west St. Cloud. Searles on Fifth Ave, which opened in February 2020 right before the pandemic, is listed as permanently closed. Owners Darin and Michelle Agnew did not respond to a request for comment.

The downtown has nearly 600 on-street parking spots and more than 2,000 spaces in ramps.