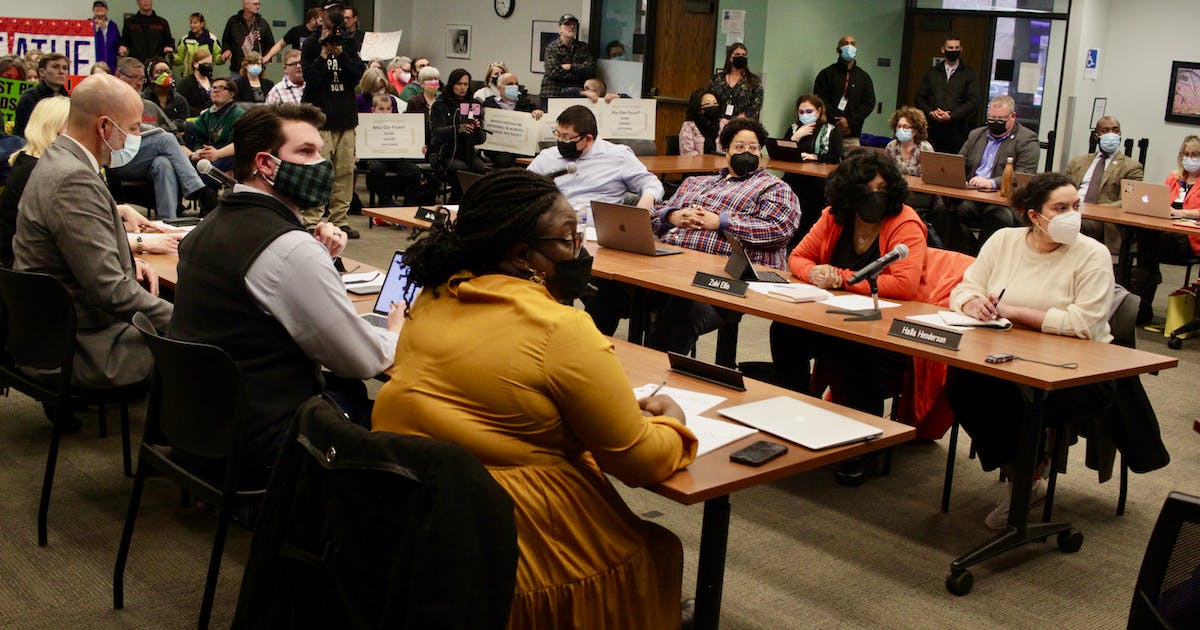 Students in St. Paul will no longer be required to wear masks in classrooms, starting Monday, as long as the spread of COVID-19 remains in check.

The school board on Tuesday changed the district’s mask policy, removing the mandate and allowing students and faculty to choose whether or not to don a face covering in public schools.

The resolution passed 6-1 during a sometimes raucous committee of the board meeting as about two dozen demonstrators at times interrupted the proceedings. Board Member Uriah Ward was the lone dissenting vote.

One man repeatedly shouted, “What about the Constitution?” during the proceedings, then retreated to the back of the room to record video of the board meeting.

The new policy requires students, faculty and staff to wear masks inside school buildings only if coronavirus transmission levels reached the highest mitigation tier as defined by the U.S. Centers for Disease Control and Prevention.

That is, if the county registers more than 200 infections per 100,000 residents in a one-week period and logs more than 20 hospitalizations or if more than 15% of its hospital beds are occupied by COVID-positive patients.

District officials will review local case counts every Thursday and notify families whether students would have to wear masks the following day.

Board Member Jeanelle Foster asked district officials during Tuesday’s meeting how case rates have changed since January, when schools across the state shuttered for in-person learning because of a wave of staff absences.

“Community cases are just down,” Superintendent Joe Gothard said. “When it’s high in the community, it’s going to be high in SPPS.”

Ward, the board member who ultimately voted against changing the policy, had attempted to add two new clauses to the resolution.

One of them would have required educators working with homebound students to wear masks, arguing that enshrining the requirement in policy gave families “good standing” to make sure visitors to mask up.

“I’m reticent to make rules for things that are very unlikely,” Kopp said.

The amendment failed on a 4-3 vote.

The board last considered masks on March 22.

At that time, Vue and Kopp voted in favor of rescinding the district’s mask mandate while board members Chauntyll Allen, Ward and Halla Henderson voted against doing so.

Foster and fellow Board Member Zuki Ellis were absent for that meeting.

Tuesday’s vote in St. Paul means the Minneapolis district is alone in the state in requiring masks in schools. Minneapolis Public Schools is among fewer than two dozen districts nationwide to do so, according to a policy tracker composed by the schools data site Burbio.