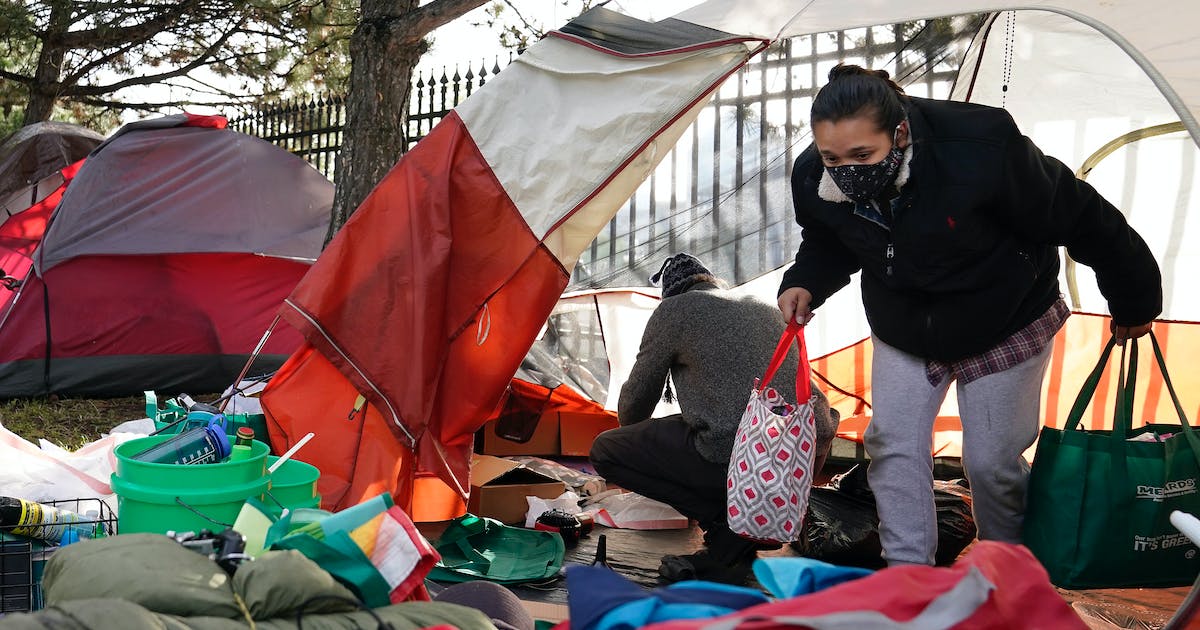 With federal money running out, Ramsey County is closing the 100-bed temporary homeless shelter at the former Bethesda Hospital site in St. Paul on Monday.

The 61 remaining male residents will move into a mix of permanent housing, hotels and other temporary shelters established during the COVID-pandemic, but those could also close in June if state lawmakers don’t help avert a “crisis,” county leaders said.

Ramsey County and nonprofit leaders continue to issue dire warnings this week that large outdoor homeless encampments could be back this summer unless state lawmakers provide nearly $73 million to keep open some temporary shelters until more permanent housing is built.

“We all recognize that we are entering a crisis,” said Wendy Underwood, vice president for social justice advocacy and engagement with Catholic Charities of St. Paul and Minneapolis. “We need a temporary bridge to get to the other side, to get to the real outcome of permanent housing.”

Underwood said the permanent east metro homeless shelters are already overwhelmed and can’t handle a surge of new people if all the temporary shelters close. The 286 beds at Catholic Charities Higher Ground shelter in downtown St. Paul are full every night.

“We are at pre-COVID capacity and we have been since November when we gave up trying to provide safe distances for overnight shelter guests to avoid a COVID spread,” Underwood said. “We are concerned that it’s assumed we will absorb this. We literally cannot.”

State Sen. David Senjem, R-Rochester, and Rep. Rena Moran, DFL-St. Paul, have sponsored companion bills that would allocate $14.5 million to the “Heading Home Ramsey Continuum of Care” each year for the next five years to keep open temporary individual and family shelters in St. Paul while permanent low-income housing is being built. The bills have garnered some bipartisan support including Sen. Jim Abeler, R-Anoka, who has signed on to a bill as co-sponsor.

Anxiety is building though that a budget stalemate at the Capitol could delay or scuttle those bills. County leaders say partisan brinksmanship could lead to dire consequences including dozens of tents popping up again along Interstate 35E, along the Mississippi River in downtown and next to the Minnesota History Center near the State Capitol. Throughout the pandemic, St. Paul city officials have only cleared encampments when they’ve been able to offer people space indoors.

“This is an urgent and critical situation,” Ramsey County Board Chair Trista MatasCastillo said earlier this week. “This is not a good news story. We have to keep the pressure on at the Legislature. We have to keep people informed and our community informed why this is such a priority to make sure every one of our neighbors has adequate and decent and dignified shelter.”

Homelessness, including those living in outdoor encampments, has been on the rise in the east metro in recent years, overwhelming nonprofits Catholic Charities and Union Gospel Mission who historically provided the lion’s share of shelter beds. The pandemic exacerbated the problem with more than 400 people sleeping outdoors by the fall of 2020, according to counts taken by the city of St. Paul.

Ramsey County working with nonprofit partners and the city of St. Paul, established a network of temporary shelters at Bethesda, a college dorm, a convent, hotels and a nonprofit building starting in 2020 using federal COVID-19 aid money. Those temporary shelters housed as many as 450 men, women and children.

Of the more than 1,800 individuals who has stayed at the temporary shelters through February, only 43 percent identified as from Ramsey County, said Keith Lattimore, director of Ramsey County’s Housing Stability Department.

Many came from the suburbs and outstate for services.

“Ramsey County answered the call. We didn’t turn anyone away,” Lattimore said.

Lattimore said the mood is bittersweet at Bethesda as residents pack up and leave.

“It’s a place where residents found refuge. They had their own rooms … and didn’t have to worry about being outside in the cold,” Lattimore said.

He said Ramsey County is digging in the couch cushions to keep the remaining shelters open until June.

“June is the date that all the doors close and there is a real potential for folks to be exiting to homelessness,” he said.