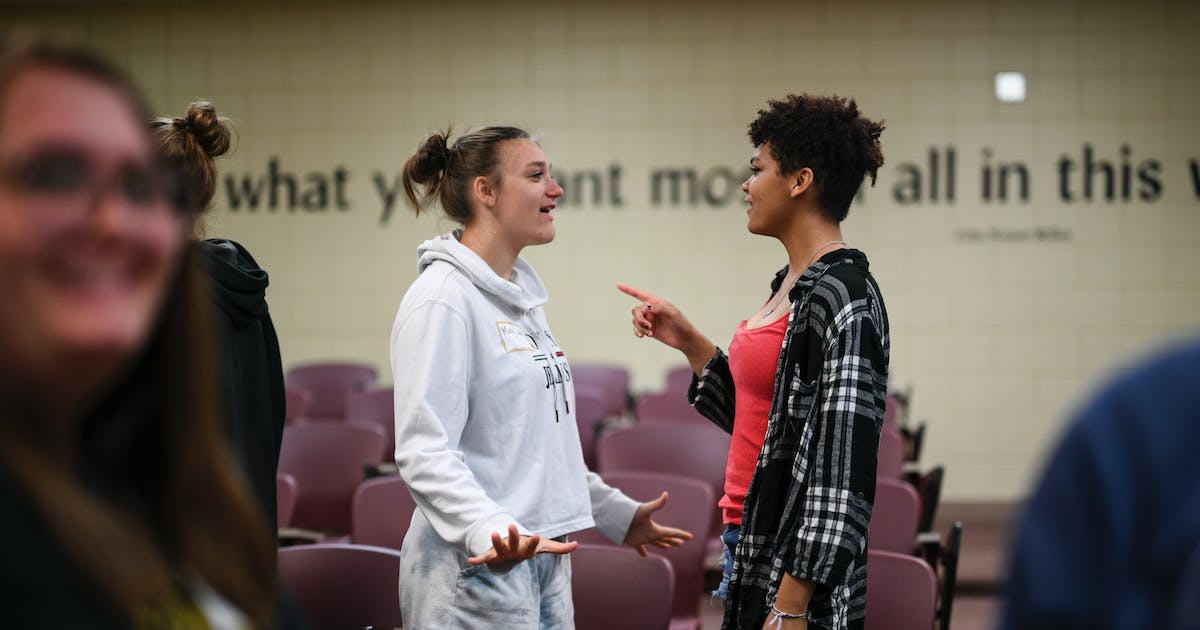 Roman Griffin was surprised to hear how casually his new classmates used racist slurs and stereotypes in conversation when he arrived at New Prague High School.

Griffin came to Minnesota from Pittsburgh, where he attended a predominantly Black school. Now, nearly all of the 1,300 students at school are white.

“I knew it [racism] existed, but I didn’t know it could be this bad,” said Griffin, a sophomore, who is Black.

New Prague High is one of the many schools in Minnesota forced to reckon with racism this year as allegations of problematic behavior piled up — at sporting events, in hallways and on social media. The troubling incidents here and across the country are launching students, teachers and school leaders into difficult discussions about equity and inclusion.

Lara Trubowitz, the education director for the Midwest chapter of the Anti-Defamation League (ADL), said she’s seen an uptick in reports of racist, homophobic and anti-Semitic incidents on school campuses over the last year. That coincides with a troubling increase in racist incidents overall, Trubowitz said, citing the wave of crimes reported against Asian Americans in 2021.

The Center for the Study of Hate and Extremism reported that anti-Asian hate crimes spiked 339% over 2020.

“When we talk with schools, we’re talking with them the ways these national trends are playing out in these different school systems depending on the demographics,” Trubowitz said.

In late February, student-athletes visiting New Prague for two different contests reported racist taunting by players and spectators. An investigation into allegations that spectators made monkey noises during the basketball game against Robbinsdale Cooper High found no evidence to back up the claims.

Nevertheless, those reports touched a nerve, said New Prague Principal Nicole Adams. And over the next few months, students and educators began meeting to chart a path forward.

Last week, students at New Prague put together an art installation to give their classmates an intimate look at their peers whose life experiences are marginalized.

A row of brightly colored chairs sits just inside the main entrance, each of them decorated by a different affinity group at the school — the Gender and Sexuality Alliance among them. A QR code attached to each chair leads to an online collection of essays, photos and illustrations.

The idea is to familiarize New Prague students with “identities, challenges and futures” as experienced or imagined by their classmates to ensure everyone is treated with a base level of respect, Adams said.

On Friday, about two dozen students also met with school counselors for a two-hour “upstander” training where they learned to stand up to their peers about racism.

Griffin said students have largely been receptive to the equity initiatives he’s helped lead. Even though it’s difficult to confront his peers at times, Griffin finds fulfillment in the work.

“A lot of schools are just working with students to reacclimate them with personal conflict resolution,” he said.

Hicks and Trubowitz said school officials should respond with the mind-set that incidents are rarely a private matter between two students. Stories spread quickly on social media.

In those instances, Hicks and Trubowitz said, schools should make a point of letting marginalized students know there’s a support structure for them. It’s not enough to merely encourage students to check in on their peers.

“That’s setting kids up to fail because it doesn’t demonstrate to them what that [support] looks like,” Hicks said.

After a pupil uses a slur, they said educators should find out why the student believed such language was acceptable.

“Look beyond that single incident to ask, is there something we need to address in our culture,” Hicks said.

Such incidents regularly attract media attention, Hicks said. And in those cases, school officials should communicate about in-school activities, host meetings and forums to include families and the community.

“It’s not something that should always be driven by the students,” Trubowitz said. “Sometimes we have to talk to the adults, as well.”

The best way to address racism on school campuses, experts say, is to start conversations on the topic before an incident occurs.

At Andover High in 2021, members of the Leo Club — the school’s chapter of the Lions Club — passed out buttons that read “End Racism.”

The accessories sparked a series of conversations among student rally-goers.

Students talked about the shooting death of Daunte Wright by Brooklyn Center police and the murder of George Floyd by a former Minneapolis officer. Students of color also shared their experiences with racist comments and microaggressions at school.

Since then, members of the schools DROP (Different Races Organizing Peace ) Club have testified in front of the Anoka-Hennepin school board, urging the district to adopt ethnic studies standards in its curriculum. They are also part of an equity team of educators and students who discuss how to address microaggressions and racist incidents.

“They [teachers] realized that it was valuable to have our input on the policies they were discussing,” senior Conor Jolly said.

Jolly, who is white, credits the club’s meetings with helping him and others learn how to advocate for themselves and their classmates.

Senior Marieclaire Mutamba said she’s used those lessons to work with U.S. history teachers at Andover to add stories of Black joy and success into their lessons. That way, she said, students won’t see Black Americans’ experiences portrayed exclusively through the lenses of pain, oppression and death.

Mutamba said she and her DROP Club peers have so far felt heard by faculty and staff at Andover High. And she has a plan to keep the adults in the building accountable.

Her younger brother starts his freshman year there this fall.

“If he comes home to tell me the same stories I’ve been telling, I’ll know we have more work to do,” Mutamba said.

Likewise, students at New Prague know their work is just the first step. But junior Ella Horejsi says it’ll be worth it.