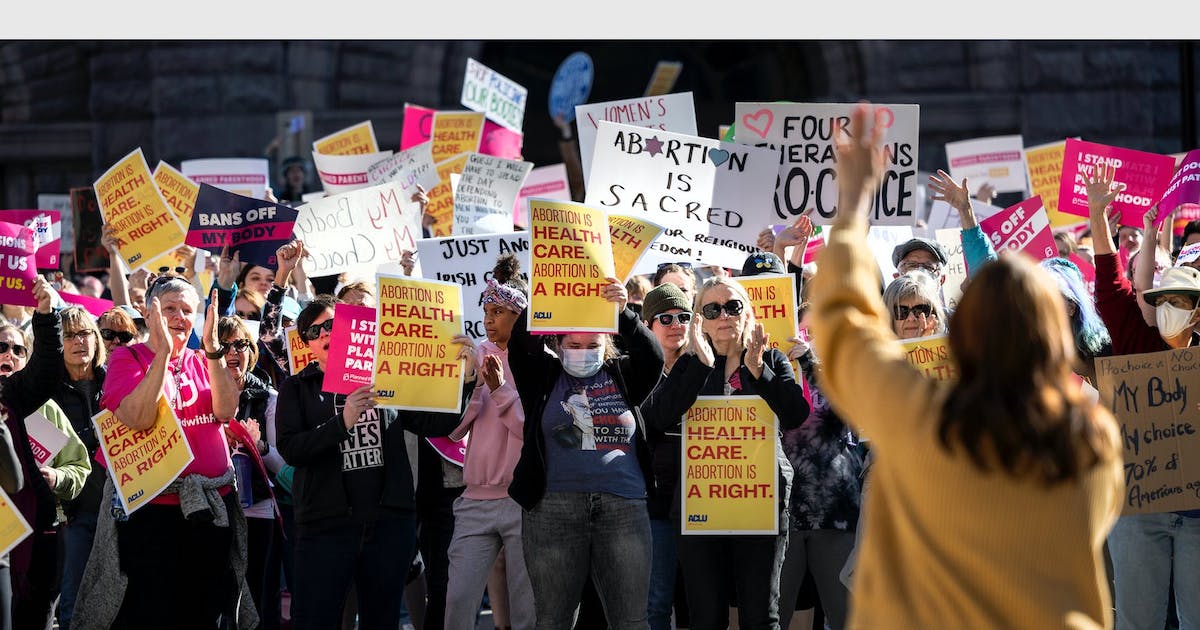 Minnesotans reacted with a mix of shock, optimism and resolve to the U.S. Supreme Court’s draft opinion overturning Roe v. Wade, an unprecedented leak late Monday that suggested the high court is poised to undo nearly half a century of federally protected abortion rights.

For those who have long sought to overturn the landmark 1973 decision, the draft opinion appeared to be the culmination of decades spent building political and legal power at the highest levels of government.

“We rejoice at reports indicating that the Supreme Court may soon overturn Roe v. Wade,” Minnesota Family Council CEO John Helmberger said in a statement. “While this is not the final opinion of the court, it is a strong indication that after almost fifty years, this cancerous ruling may soon be excised and our nation may begin to heal.”

For those who have sought to preserve access to legal abortion in Minnesota and nationwide in the face of challenges to Roe, the moment was sobering — but one they predicted would prompt more people to get involved in the fall elections if the state becomes an island for abortion access in the Upper Midwest.

“We knew this was a strong possibility, but it doesn’t lessen the blow,” said Jess Braverman, legal director for St. Paul-based Gender Justice. “It’s really hard to think about all the ways it’s going to affect people’s health, their lives, bodily autonomy. It’s a really sad day.”

Justice Samuel Alito’s draft opinion on behalf of the court, first reported by Politico, called Roe — which legalized abortion in every state as a constitutional right — “egregiously wrong from the start.”

Still, draft opinions and the votes of individual justices can change, even at the last minute. Chief Justice John Roberts confirmed Tuesday that the leaked draft was authentic, but said it wasn’t final. With the final opinion potentially weeks away, abortion opponents were hesitant to celebrate.

Brian Gibson, executive director of St. Paul-based Pro-Life Action Ministries, said he first learned about the draft opinion Monday when his lawyer e-mailed him a link to the Politico story.

“This makes it very hopeful that we’re getting the decision we’ve been wanting to see for 50 years, and that brings a lot of hope,” Gibson said. “At the same time, living in Minnesota, we know that it makes no change in abortion immediately at all.”

Abortion access is also constitutionally protected in Minnesota under the 1995 state Supreme Court decision in Doe v. Gomez, though there are restrictions such as a 24-hour waiting period, mandated counseling and a requirement that minors notify both parents. Changing the state Constitution would require either a voter-approved amendment or a reversal by the state’s top court, while additional abortion restrictions are possible if Republicans sweep both chambers and the governor’s office.

In neighboring North Dakota and South Dakota, “trigger laws” would effectively outlaw abortion once the U.S. Supreme Court’s decision comes down. Wisconsin would revert to a 19th-century law still on the books that bans abortion in most cases. Abortion is protected in Iowa under a state Supreme Court decision, but that is being challenged.

“Of course, we are furious at the possibility that abortion could become illegal in this country,” she said. “And if that happens, it will fall disproportionately on certain states, including certain states in our region.”

Minnesota physicians are bracing for an influx of patients if Roe is overturned. The state is home to eight abortion providers, including Just the Pill, a telehealth clinic. Though telemedicine can make medication abortions more accessible, laws governing the medication apply to the state where the patient is located — and states including South Dakota have already begun to crack down.

“Women around the country are now going to be looking to states like Minnesota to get the health care that they need, including abortion care,” said Democratic U.S. Sen. Tina Smith, who was executive vice president with Planned Parenthood Minnesota, North Dakota, South Dakota in the mid-2000s. “But we should not imagine that that’s just as simple a thing as hopping on an airplane or driving a few hours, because the complexities for women is so much greater than that.”

Dr. Sarah Traxler, chief medical officer for Planned Parenthood in the five-state region, said at the news conference that the number of people seeking abortion care in Minnesota could jump by more than 25%.

Only a few hours after the draft court opinion was leaked, an e-mail from Walz’s campaign landed in supporters’ inboxes, and the governor was sending a flurry of tweets with a common theme: “To protect abortion rights across Minnesota, we need to win in November.”

He wasn’t the only Democrat racing to get out that message. From the leadership of the Minnesota DFL Party to the state auditor, Democrats were trying to mobilize voters as outrage and concern spiked over the possibility of Roe’s end.

“In some ways, it’s going to mobilize folks into action that probably haven’t been really politically active in years,” DFL Party Chair Ken Martin said. “And I think that’s the danger for the Republicans here, in my opinion, is that they don’t realize how animated voters are going to be on this issue.”

Republicans across the country have relied for years on anti-abortion rhetoric for votes. In Minnesota, the GOP response to the news was quieter than that of DFLers, with some Republicans expressing concern about the leak.

“Until the court makes a decision, I think it’s a little bit of a high risk to put out something until you know exactly what the decision is going to be,” Minnesota Republican Party Chair David Hann said.

But some Republicans heralded the news and said it will also prompt more of their voters to get engaged.

“PROTECT THE LIFE OF THE UNBORN,” gubernatorial candidate Scott Jensen tweeted shortly after the news broke.

Legislators who oppose abortion rights regularly bring forward proposals that would limit access, including a measure Tuesday related to licensing for abortion providers and a proposed ban on distributing family planning grants to organizations that provide abortions or refer patients to providers.

“We know that people who sincerely believe that abortion violates the right to life of an innocent human being should not have to have their tax dollars go to organizations who perform or refer for abortions,” said Rep. Lisa Demuth, R-Cold Spring, who introduced the two amendments. Both proposals failed to move forward in the DFL-controlled House.

State Sen. Michelle Benson, R-Ham Lake, said that while the draft opinion leak “should be shocking to everyone who values the discipline and protocol of the court,” the news that Roe could be overturned “has revived the discussion of abortion here in Minnesota.”

“The prolife movement within the Republican party has always been engaged, and so this will be more reason for them to be engaged,” she said.

If Republicans take control of both the House and Senate in November, Walz said, they could put constitutional amendments restricting abortion on the ballot even if he remains in office, because such amendments do not require the governor’s signature.

“People are scared today. The number of e-mails I’ve gotten, and the number of people I’ve talked to, they are deeply concerned about what will happen,” Walz said. “So, here in Minnesota we will continue to protect reproductive freedoms with everything we have. But we recognize now that for the first time in almost 50 years, that is under jeopardy.”

An eruption of cheers and applause from a crowd of around 500 abortion rights supporters rang outside the U.S. Courthouse in downtown Minneapolis on Tuesday evening. Many carried signs saying “Planned Parenthood is here for good” and “My body, my choice.”

Supporters said they were not surprised by the news and felt angry that they had to protest for the right for an abortion.

Among the crowd was Amanda Koller, 34, who said she read the report when it popped up on her social media feed Monday night.

“I was so angry and heartbroken and upset,” she said. “I felt like I needed to channel my rage in some way, so I started looking up abortion funds I could donate [to]. … I found this protest, and I told my husband, ‘After work, we’re going to a protest.’ “

Theresa Tauer, 31, held up a sign of former Supreme Court Justice Ruth Bader Ginsburg and said that while she felt upset by the news, she felt empowered at the rally.

“I came out here because I support the right for women to choose for their own physical and mental health and whether they want an abortion or not,” she said. “I felt scared and nervous, but now, being here, I feel better about our own state. But I do feel concerned about other states and the country as a whole.”