Ten years after catastrophic flood of 2012, is Duluth ready for the next one? 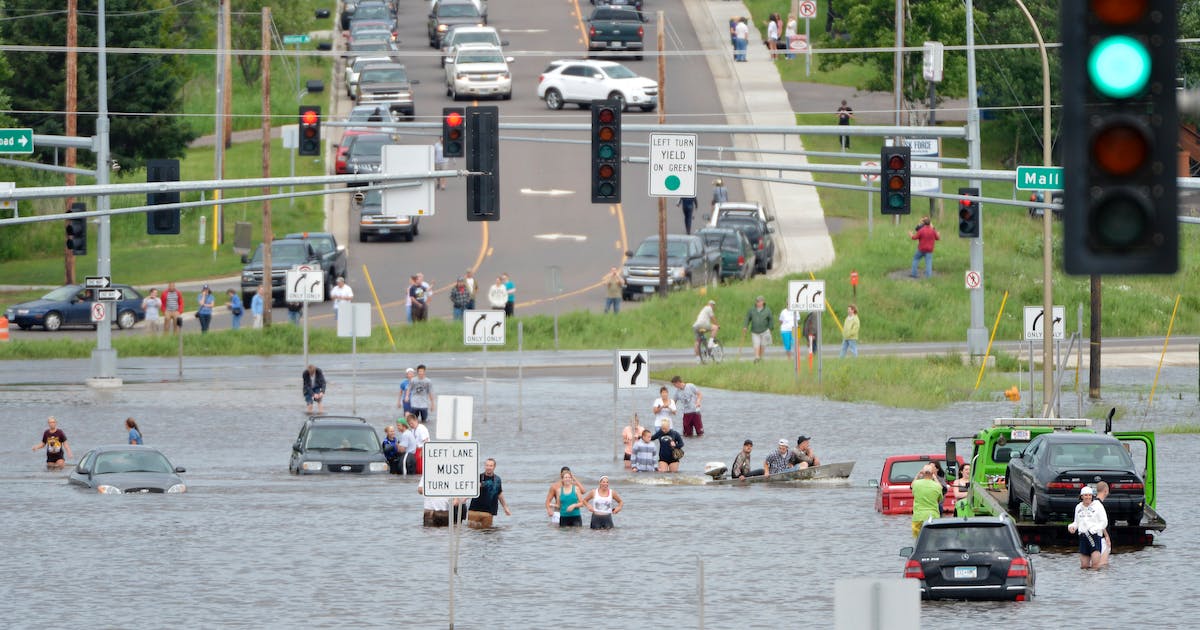 DULUTH – Stories from the disastrous flood that began here 10 years ago today are hard to forget.

A zoo seal languishing in the middle of a road. A young boy swept into a gushing culvert and spit out alive, nearly half a mile away. Streets buckling, a car falling into a massive sinkhole and homes filling with feet of muddy water.

All this happened when more than 10 inches of rain fell in 24 hours and raging waters overcame the city’s hillside streams in its most devastating flood in history.

“It was one of the worst days of my life,” said Lizzy Larson, a Lake Superior Zoo employee who helped rescue the seal.

The zoo lost more than a dozen farm animals and birds as a swollen creek running through its grounds became plugged by trees and debris at the mouth of a culvert, turning the zoo into a bathtub and sending its polar bear and seals cresting over their enclosures.

Destruction played out throughout Duluth and nearby communities, resulting in $167 million in relief aid from the state to help pick up the pieces. A decade later, as extreme storms grow more common, is the city ready for more catastrophic rain?

State, federal and city money helped replace and in some cases improve destroyed culverts, pipes and storm tunnels. Some homes built atop flooded underground creeks were bought by the city so they couldn’t be used again, and alternative floodwater paths were built.

Because of costs “we are never going to be able to design all public infrastructure around events like the flood of 2012,” said Ryan Granlund, who oversees the city’s stormwater program. “We focus on the vulnerable areas and do your best to set yourself up for success.”

Duluth is embarking on a study of the flood risk in the Lincoln Park neighborhood, an area with many low-income residents that was hit hard by the 2012 flood. A stormwater resiliency plan will emerge and be used to find other weak points in the city, prioritize projects and seek state and federal funding for them.

Many of the city’s streams flow underground on their way to Lake Superior and the St. Louis River — beneath streets and buildings, finding daylight for a stretch before disappearing again. Inlets to those streams are at risk, so that’s where city stormwater workers look for clogs and other vulnerabilities.

Because of Duluth’s steep terrain and plentiful bedrock, water flows with force during a flood, causing erosion. That’s not going to change, Granlund said, so projects such as stormwater retention on new developments are crucial.

Former Mayor Don Ness, who shepherded the city through the 2012 disaster, said the most “blown-out” tunnels and culverts were a century old and built under different assumptions about the severity of weather. Before the Miller Hill Mall area in the upper elevations of Duluth became a paved-over commercial region, it was a swamp.

“Everybody understood this is the problem, and it is why it failed,” Ness said of the torrents of water careening down the hill in 2012.

Recovery aid came with repair restrictions. A 5-foot culvert had to be replaced with a 5-foot culvert, not a larger one better able to withstand powerful bursts of water. In areas where it was obvious it wouldn’t be good enough, the city paid for a more resilient repair, Ness said.

“But in many cases, we didn’t have the resources to do that,” he said.

With climate change directly affecting the nature of storms, Ness said, relief for damaged cities should be more forward-thinking.

Former state Sen. Roger Reinert represented Duluth in 2012 and worked to secure aid for the area. He and Ness said the city — with the reinforcement of the Lakewalk against violent storms and other climate-related measures — has done a good job preparing for the future.

“But as a population, I think we still suffer from a lack of imagination that something like that could happen again,” Reinert said. “I think we are really good at responding to bad when it happens, but not at envisioning that this could be the new norm.”

“Future-proofing” is difficult, said Tiffany Sprague, who coordinates stormwater and sustainability work for the University of Minnesota’s Natural Resources Research Institute in Duluth. But some communities around the Great Lakes have done it, she said, and Duluth “feels like a city on the cusp.”

Much work is being done by the city and nonprofits, such as Ready North, to prepare especially marginalized neighborhoods for a major rainstorm, Sprague said. But, she said, resources are a problem.

Many Duluth neighborhoods in the paths of streams don’t have the means to undertake such improvements as new gutters, rain barrels and expensive underground drainage systems. And cities built like Duluth must balance land development with preserving green space that will absorb water rather than send it downhill.

“We’re almost there, but we are not there yet,” Sprague said. In the meantime, she said, “who knows when the next flood comes.”

The zoo, badly damaged by the flood, was rebuilt with an eye toward extreme storms. A rerouted Kingsbury Creek and a reconstructed, bigger culvert under Grand Avenue reduce the likelihood of severe flooding.

“Barring an act of God, we have no worries about that kind of flood,” said the zoo’s executive director, Haley Hedstrom.

The flood triggered the only “code red” ever called at the zoo when water lifted the polar bear out of her enclosure. Larson recalls the bear, Berlin, standing outside of her home, staring back inside through the viewing window like a visitor. Armed staffers were able to tranquilize the animal and bring her to safety, Larson said.

Seals Feisty and Vivian were rescued from the road by zookeepers after being swept through the culvert. They were transferred to other zoos shortly after, and the Polar Shores exhibit closed for nearly a decade. It became home to two Alaskan brown bears and two river otters last year.

“It took nine years to rebuild and recover from the flood,” Larson said. “Finally, our zoo is whole again.”