The art of protesting the Russian Embassy 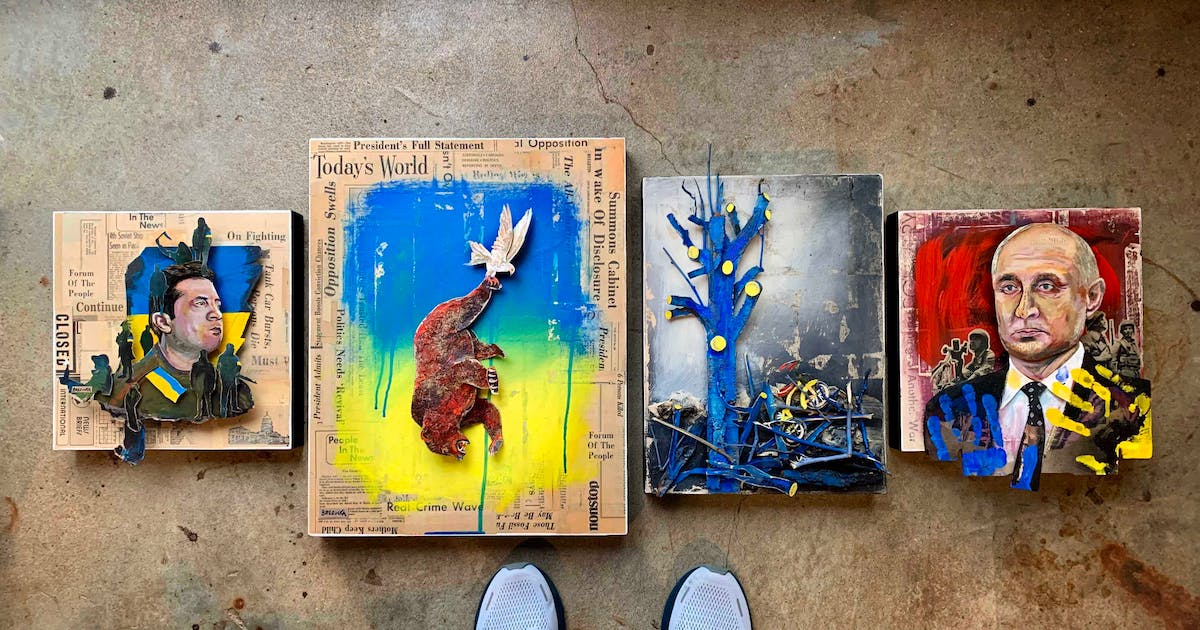 Wayne Brezinka put all his heartbreak and hope for Ukraine into his art, then put his art where Russia can’t miss it.

Right across the street from the Russian Embassy in Washington, D.C.

Brezinka’s exhibit, “Facing War: An Invitation to Reflection on the Russian Invasion of Ukraine,” opens this weekend in the lobby of the Glover Park Hotel, which faces the embassy.

Brezinka, born and raised in Upsala, Minn., is a mixed-media artist based in Nashville. He layered paper, paste, old newsprint and bright splashes of blue and yellow to build these works. Art for the days when there are no words for what is happening to Ukraine.

He crafted Ukrainian President Volodymyr Zelenskyy and his citizen-soldiers.

A shattered tree and a child’s tricycle, entangled in a ruined landscape.

Russian President Vladimir Putin, stained yellow and blue by the hands of Ukrainians pushing back.

He called this exhibit an invitation and he means it. He hopes the Russians next door will come to see.

“This work was not created out of animosity, or as a finger in the eye of Russia,” he said. “This creates a place for peaceful protest.”

The hotel itself has become a place of peaceful protest, draped in a 60-foot tall Ukrainian flag and surrounded by protesters who have not let the embassy staff forget, not once in more than 50 days, that the world is watching.

This week, protesters projected massive images of the Ukrainian flag across the blank white embassy façade. For four hours, protesters gleefully dodged a floodlight that someone on embassy grounds kept aiming in an effort to blot out the symbol of Ukraine and its people.

Protesters will be back in force this weekend, planting sunflowers, the national flower of Ukraine, across the street from the embassy’s Russian soil.

Millions of people will come together this weekend for Easter services, for Passover seders, for Ramadan prayers and iftar meals. The protests, these works of protest art, are one more act of communion.

“I want people to stop and think,” Brezinka said. “I want them to realize, ‘I’m more connected to this war than I think I am.'”

For Brezinka, it was the sight of Ukrainian refugees fleeing across the Polish border to safety. His great-grandfather came to Minnesota from a village in southwest Poland in the late 1800s. A village that still bears the original spelling of the family name. Brzezinka. After the German and Soviet invasion of Poland, the Nazis built a death camp, Birkenau, Brzezinka. Nine decades later, after the Russian invasion of Ukraine, refugees turned to Poland for safety and sanctuary.

Since childhood, Brezinka has pulled in bits of the world around him — scraps of cardboard, rope, bottle caps — to make something new. His work, he said, is “all about bringing fragments and pieces together to tell a larger story.”

It’s a story he hopes the Russians will hear.

The Facing War exhibit will be on display at the Glover Park Hotel on Wisconsin Avenue from April 16 through May 15. For more information, visit waynebrezinka.com.