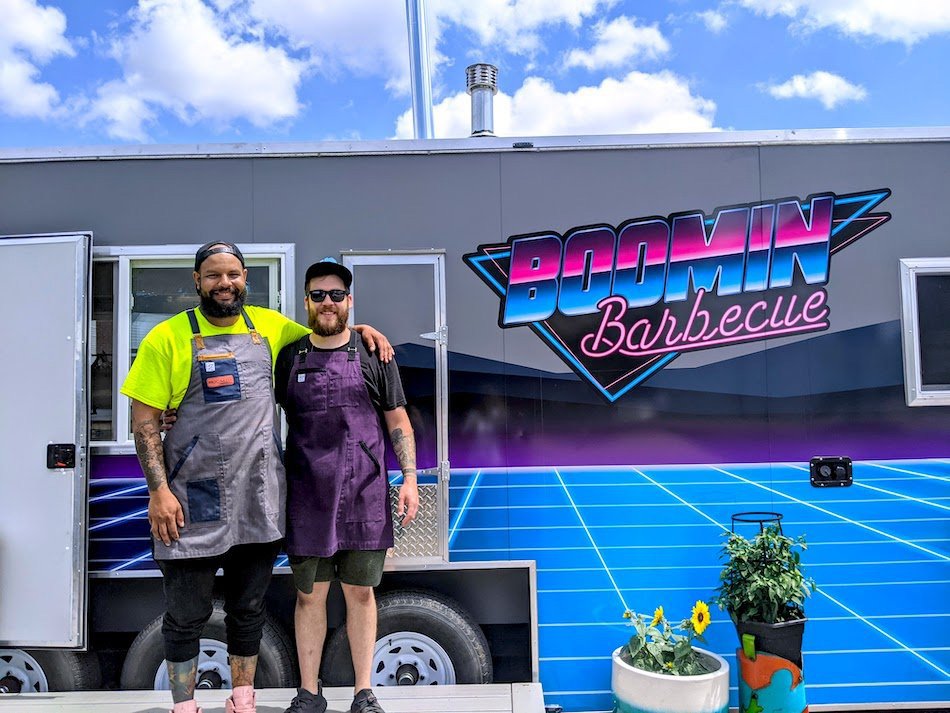 You know that whole thing about April being the cruelest month and all? Happy to kick it out the door this year in particular, yeah? We’ll continue to put on our optimist pants and be grateful that both the snowblower and the lawnmower get to sit quietly for a bit as we spend those freed up hours doing what we want. Namely, housing new sandwiches, crawling between seasonally open food trucks, always spelunking for new tacos, and dreaming of record bars to come. It’s a life.

This week, the Starbucks on Snelling in St. Paul has become the first one in Minnesota to unionize. Following the nationwide movement toward unionization, five different locations in the state have moved towards the election process. This first one passed with a vote of 14-1, while the remaining four will happen in the next few months.

+ The pizza gods are certainly happy, giving us all these fresh slices. Mario’s is finally open on Cleveland in St. Paul. From chef Jason Hansen of Estelle’s, this pizza and sub shop takes the place of Tillie’s Farmhouse. Look for pan pizzas which happen to be rectangular (though we are not calling them Detroit-style here) and East Coast hero sandwiches: a roast beef with horseradish feta dressing, a Italian combo with salami and all the giard goods, a marinated artichoke with fresh mozz among others which all come with some amount of Duke’s Mayo on house-baked sesame bread.

+ AND, Boludo in Kingfield has moved down the block to a new, bigger space dubbed El 38. There’s a whole black tile vibe in the front room with where you can order all the same great oblong pizzas and empanadas. This location gives them a bigger kitchen to work with, so expect some new menu items when they get rolling. Also, at this location only: a Fernet and Coke cocktail called Fernando.

+ El Sazon Tacos and More is a newish taco shop down in Eagan that has the foodists a-buzzing. Chef Cristian DeLeon has carved a nice little counter out of the side of a gas station off of Diffley Rd.. Not only will you find tacos, burritos, and bowls, but a healthy amount of birria options, including birria pizza and birria ramen (?!). There’s also chicharrones and loaded fries I need see. Takeout and delivery and family meal pop-ups.

+ In the Ombibulous parking lot, Boomin’ BBQ trailer is back in business for the season this Saturday at noon. The lads have rejiggered their Jucy Lucy burger with a different beef blend and house-made cheese. They have opened online ordering this year so that you can order and pick up without waiting this beautiful spring weather.

+ The re-do of the old Augustine’s in St. Paul is done and Kalsada is open. Modern Filipino food is the name of the game for chef Leah Raymundo and John Occhiato who also own Cafe Astoria and Stella Belle together. During the first part of the day, from 7am-3pm, coffee and pastry service will feel much like their other cafes. But from 4pm-9pm expect pancit noodles, small bites including Filipino BBQ pork skewers and crispy lumpia rolls, and bigger dishes like crispy milkfish, skirt steak tapa style, truffled chicken adobo, even a longganisa griddled milk pork sausage burger. YES.

+ Plant loving Stalk & Spade opens their second location in Edina today, at 50th and France. Once again, the new non-meat burger shop is offering free lunch from 10:30am to 1pm. Last time there were huge lines for the plant-based shakes, burgers, and chicken* sandwiches, so plan accordingly.

+ The Eatery at the Arb is back open after a refresh at the Arboretum. If you find yourself strolling the plant sales over the next few weekends or the May Market this weekend, stroll over and check it out for a fresh and new menu of soups, salads, and sandwiches.

+ Lawless Distilling is back open to the public with a fresh outlook and new menu called: Flavorhood, inspired by our neighbors. In fact, they doing that neighborly thing where you bring in a receipt from dining with one of their naybs (at Cafe Racer, Midori Floating World, or Milkweed Coffee), you get 20% off your cocktail order. And it works in reverse too, so HH with drinks and bring your tab to get 20% off eats. NICE.

+ Song Tea & Poke opens this weekend officially grandly at West End. This feels like what I need to know if I’m going to follow through on some rainy weekend movie marathons which will require boba and spicy tuna with yum yum sauce.

– Nordic Waffles announced that they would be closing their retail spot at Potluck in Rosedale. The company will still show up at the State Fair and continue to build and grow their grocery line of frozen waffle sandwiches. In fact, they are adding a new Berries & Cream flavor which should be showing up on shelves in the next month.

>> Macanda is the name of the new restaurant and bar coming from Daniel del Prado this summer. Partnering with Aaron Switz again, the duo behind Josefina have gutted the former Wayzata Brew Works in order to create a Mexico City-inspired restaurant with a vinyl lounge and record bar. Opening should be mid-June.

>> Your sweet tooth is sick of being ignored. Edward’s Dessert Kitchen is opening back up on Thursday, May 4 to pay it some attention. Besides coffee from Tru Stone Coffee roasters, and a full bar, you’ll find both new options and old favorites on the dessert-packed menu. Blueberry buttermilk cheesecake, salted butter chocolate chip cookie, stone fruit pavlova, and small savories such as pizza toasts and kale artichoke dip.

>> Another part of the coming Four Seasons which we can all look forward to, is the fourth-floor outdoor terrace, which will host a patio, pool deck, and eatery to be known as Riva. The alfresco Italian concept will be lead by Executive Chef Martín Morelli, who originally hails from Uruguay, but has cooked all over the world. Riva will offer a lunch of tapas and small plates for snacking or cocktails with the Italian coastal fare from the statement bar. At night, they plan sparkling string lights and outdoor table lamps, for as long as they can. But winter won’t necessarily be the end, there’s talk of a heated bar rail and other wonderland touches to embrace all four seasons. See what I did there?

// This weekend is your chance to get a peek at Mancini’s Rathskeller at the Schmidt Brewery. The historic underground space will be open during the Schmidt Artists’ Spring Art Crawl, and Mancini’s is inviting everyone down for some snacks, beverages, and a looky-loo.

// You may be looking for that special something to sip to get your from the winter heaviness into the vernal light: maybe give a beer-wine hybrid a try. Idyll Forest is a new label from Pryes Brewing and it brings a tart wild ale to meet cabernet sauvignon grapes, and the result is kinda crazy good. Bottles will be released at the brewery on Saturday starting at noon.

// It’s time to learn a little Hmonglish. On Saturday at Union Hmong Kitchen, chef Yia Vang will be celebrating the culinary crossovers that have won his heart. A little bit Hmong, a little bit ‘Merica, a whole lot of goodness. For one day you can get taro chip nachos, a banh mi brat with Hill Tribe tots, Hill Tribe fried chicken sandwich, a Meeka burger, amazing steak salad, and ramen noodles with curried beef bolognese. And a portion of sales will benefit the Very Asian Foundation.

// It’s the last Saturday of the month, you know what that means skaters ….

// Hey, did you know that next week the national Craft Brewers Conference will be here in town starting Monday? Expect a lot of beard, from all over. Indeed Brewing is getting ready to party with a kick-off party at Sonora Grill and other parties throughout the week. Pryes Brewing is just calling it Craft Beer Week and hosting live music, and special releases all week. Inbound Brewing is pledging Monday to Dolly and the rest of the week to fun live music and great food trucks. Fair State Brewing is hanging at Tilt Pinball Bar on Wednesday for a day of FREE play for all.

// And I’m not really sure if this has to do with CBC, but Wild Mind Ales went and bought themselves an ice cream machine. They are messing with beer soft serve ice cream, and I’m giving praise for that. Clean Plate Club is a thick fruited gose made with marionberry, marshmallow fluff, angel food cake and sea salt. Yes please.

// You know how on Tuesdays you sometimes stare into the fridge as if dinner can be conjured by intense laser eyes? Head the dread off at the pass by booking  your Tuesday May 3 ticket to a Bird in Hand’s Driftwood Bar dinner. Score your $20 ticket, then post up at the bar to show said ticket. Soon someone without intense laser eyes (fingers crossed) will bring you a lovely short rib sandwich with cole slaw, pickles, an arugula salad, house made chips, and chef’s favorite ice cream. Done.

// Well, grab your daubers! You know you wanna play a little bingo with me. B4 you pass this up, know that I will be calling balls at LUSH bingo on Wednesday, May the 4th be with you. Will I be sporting Princess Leia buns, or no? Come early and nosh on some Betty & Earl’s biscuits with me, it’s first come first serve and proceeds benefit the good work of the Aliveness Project. Doors at 4pm, bingo starts at 6pm.

// And later, when your lightsabers are fully primed, you should head to Meteor Bar for May the Fourth. They’re going all in, watching the movies, throwing down with a special menu (is Blue Milk too mainstream already?), whatever you do, let the Wookie win.

// Have you bought tickets to the next installment of Stories Behind the Menu? This is your gig if you want to spend Cinco de Mayo in the hands of one Amalia Moreno-Damgaard, author of Amalia’s Meso-American Table. We’ll dig into a multi-course meal while having discussion about foods and culture from this rich fertile area of Central America. Tickets are $125-$150, dinner and drinks start at 6:30 at ModernWell.