'The system is in ruins': Minnesotans with disabilities feel left behind amid workforce shortage 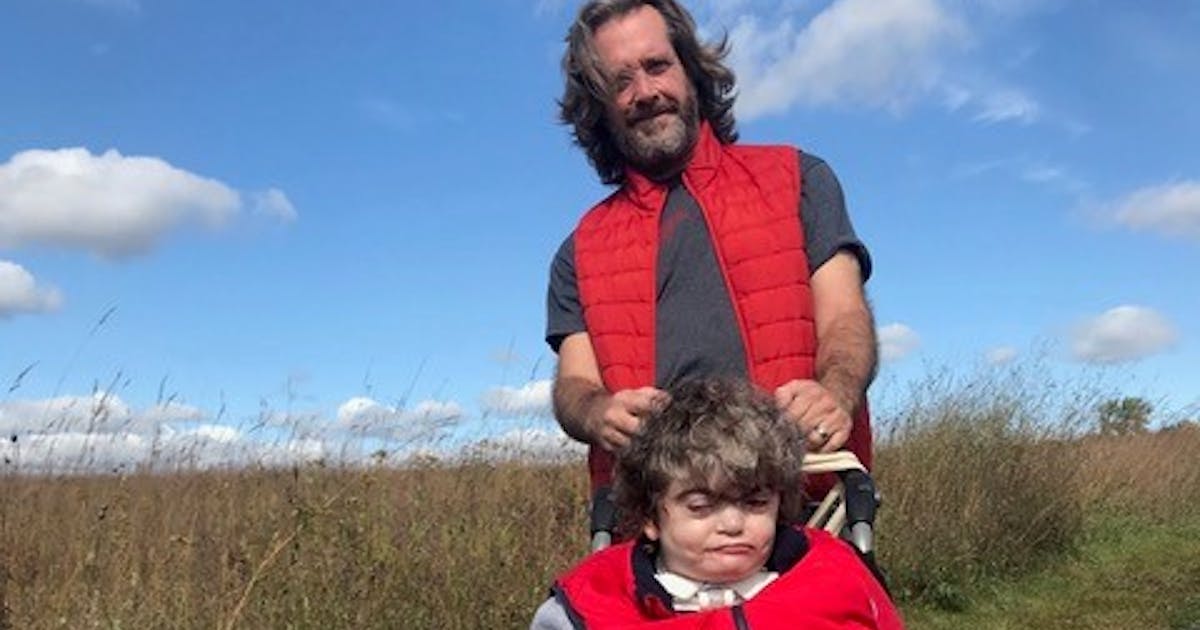 Before the pandemic, Caleb George-Guidry lived in a group home with a circle of friends and staff who understood his spirited personality. He also attended a day support center where he enjoyed a wide range of activities, from painting to yoga, designed for adults like him with significant disabilities.

Now, more than two years later, George-Guidry’s life has been turned upside down. Because of severe staffing shortages, the 31-year-old last fall was forced to move out of his group home of the past 12 years and into a new house with strangers who did not comprehend his way of communication. Then George-Guidry’s day center in St. Paul abruptly suspended his services after nine years — leaving him isolated and depressed. Today, George-Guidry, who was born with a rare disorder that affects his physical and cognitive development, spends much of his time watching videos and playing games in the common space of the house.

“Most of us are moving past this pandemic, but there’s a whole community of people with disabilities who have not been able to move on,” said Matt Guidry, his father, who lives in Minneapolis. “It could and should be different.”

Even as the worst of the pandemic has eased, the state’s carefully stitched safety net for adults with significant disabilities remains badly frayed amid a severe and worsening workforce crisis. Adults with cerebral palsy, autism and other disabilities — who took pride in living independently — are being forced to move back home with their parents or into larger, congregate-care settings where their daily choices are often carefully controlled. Many with intense medical needs feel abandoned and neglected, as their social media feeds are filled with relatives and friends returning to normal lives.

Across Minnesota, more than 3,500 adults with intellectual and developmental disabilities are still waiting to return to day and employment centers that have curtailed services since the pandemic began, according to the industry group that represents these providers. Waiting lists at some large day centers, where individuals make social connections and participate in learning activities, have swelled to hundreds of people. With nowhere to go during the day, many are languishing at home.

“The system is in ruins, and we all feel stretched beyond our capacity,” said Stacey Vogele of Cottage Grove, whose 21-year-old daughter, Tana, has multiple disabilities and has been waiting for more than a year to be accepted into a day support center.

The chief cause is a critical shortage of people willing to care for adults with disabilities and high medical needs. Amid a tightening job market, in which the state’s unemployment rate recently dipped to an all-time low of 2.2%, thousands of openings for caregiving jobs have gone unfilled. Vacancies for home health and personal care aide jobs ballooned nearly 70% over the past year to 9,110 at the end of 2021, up from 5,383 vacancies at the same time in 2020, according to the most recent state data. The median wage for direct support positions has inched up to nearly $15 an hour, still too low to attract workers from less-demanding jobs, say disability service providers.

In a sign of how severely the safety net is strained, state lawmakers took the unusual step this spring of expanding the licensed capacity of care facilities for people with disabilities. Group homes that for decades have been mostly limited to four people could temporarily house up to six; and licensed six-bed homes, known as “intermediate care facilities,” would be permitted for up to eight, under the provisions. While the changes would last only a year, they were opposed by some disability advocacy groups.

“Putting more people into homes that already can’t support them well is not a viable solution,” said Barnett Rosenfield, state ombudsman for mental health and developmental disabilities. “It tends to reduce both positive health outcomes and community inclusion.”

To date, the workforce crisis has not caused widespread closings of disability support programs, thanks in part to an emergency infusion of state funding early in the pandemic. Because of staffing constraints, however, some day support centers are serving half as many people as they did two years ago. Others are having to ration services and turn down clients with complex health needs.

“The people who most need services — the medically fragile — are hurting the most,” said Julie Johnson, president of the Minnesota Organization for Habilitation and Rehabilitation (MOHR), which represents 100 day support providers statewide.

On a frigid morning in late February, Lauren Thompson, 34, who has cerebral palsy and limited mobility, watched with a mixture of sadness and disbelief as a group of men lugged her cherished art and other belongings to a moving van outside her apartment where she had lived for eight years.

Because she could no longer retain qualified caregivers, Thompson said she had no choice but to move into a four-bedroom group home in Crystal with round-the-clock support. Still, the move was a crushing setback for Thompson — a disability-rights activist who has campaigned at the State Capitol for policies that promote greater independence for people with disabilities.

Overnight, Thompson’s life became more circumscribed. Everyday decisions that many take for granted, such as when to eat meals and go on social outings, are now largely determined by her paid staff, whom she had no say in hiring.

“My entire way of life changed in a matter of hours,” Thompson said of the move. “It’s hard because basically I have to prove — all over again — that I can take personal responsibility for my choices.”

Months of solitude are also taking their toll on Kylen Ware of South St. Paul. The 27-year-old has quadriplegic cerebral palsy, profound intellectual disabilities and a disorder that causes him to experience intermittent seizures that can obstruct his breathing. Over the past two years, his rotating crew of five visiting caregivers has dwindled to just two personal care aides who visit during the day — leaving his mother to fill in the long gaps on nights and weekends. Meanwhile, Kylen no longer attends meetings with his friendship club and his horseback riding lessons are on hold.

“I’ve dedicated my life to taking care of Kylen, but honest to God, everyone has a breaking point,” said his mother, Katheryn Ware, a county social worker.

Their experiences are far from unusual. A wide-ranging state survey released in April 2021 of hundreds of Minnesotans with disabilities has found that progress toward inclusion has largely stalled and, in some cases, reversed. People with disabilities are spending more time at home, and have fewer meaningful relationships than they did four years ago. They are also interacting less with people who are outside of the disability support system and are not paid staff, according to the annual survey.

Trevor Hulbert, 36, who is on the autism spectrum, was forced to move from his condominium into his parents’ home in Edina after his home care provider abruptly terminated his services in October due to a shortage of staff.

Restless and lonely, Hulbert sometimes spends hours pacing the hallways of his childhood home while repeatedly muttering, “Condo, condo, condo.” It’s Hulbert’s way of expressing his wish to return to the more integrated life he enjoyed at his condominium, where a steady stream of support staff kept him engaged in activities, his parents said.

“Trevor feels that his world has closed down around him, and he can’t comprehend why,” said his mother, Alice Hulbert. “It’s heart-wrenching to watch.”

In March, the Guidrys received word that Caleb would be allowed to move back to his former group home — but under less-than-ideal circumstances. Most of his old housemates had moved away and were not coming back; and because of staffing constraints, Caleb would have to spend weekends at his parents’ home in south Minneapolis.

“Caleb deserves to live a rich, full life like everyone else,” said his father as he tossed a ball to his son on a Sunday afternoon. “But he is existing like we all were a year-and-a-half ago, which is to say he’s stuck and very isolated.”

Correction:
An earlier version of this story misspelled the name of Caleb-George Guidry.