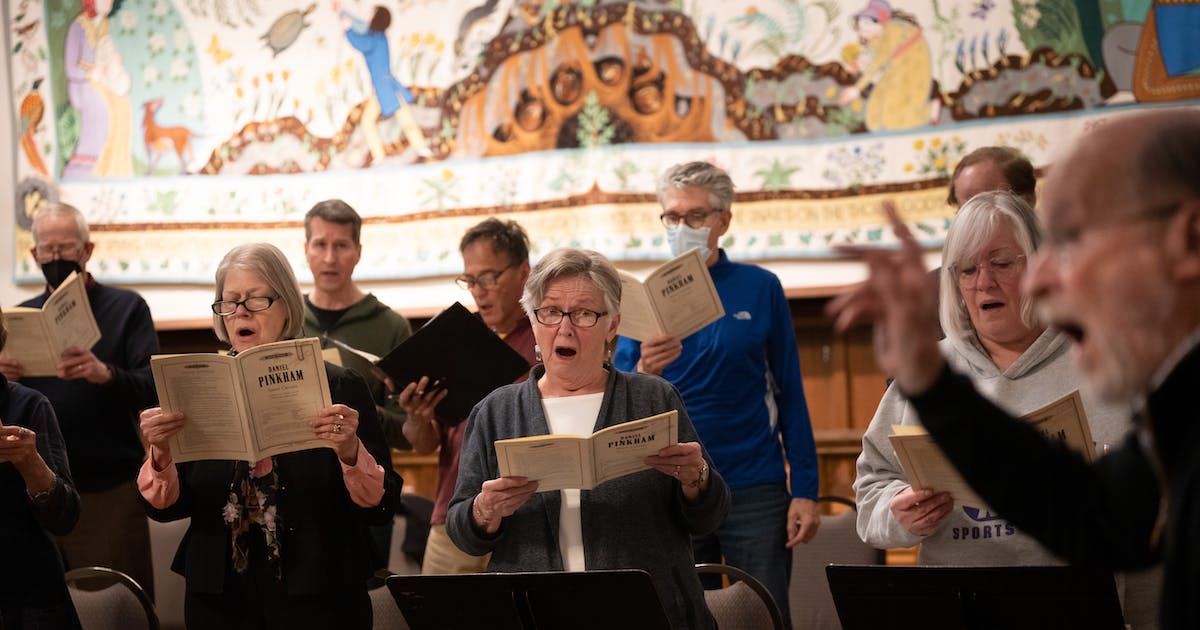 On Easter Sunday, it’s a longstanding tradition for the choir at Eden Prairie United Methodist Church to lead the congregation in Handel’s “Hallelujah” chorus. But the church was silent in 2020, when the first wave of the pandemic pushed services online.

Music director Megan Peterson had hoped the choir would be able to raise their voices the following year. Instead, a second pandemic Easter featured a choir-less outdoor service and a shared YouTube video featuring the congregation lifting “Hallelujah” signs in time with the music.

This Sunday, the church’s rafters will vibrate with the rousing Easter oratorio.

“I expect tears,” Peterson said. “I think it’s really going to feel like what we were traditionally used to. And Easter is such a time of celebration. I think the experience this year is going to be really profound and felt by all of us to be able to come together again.”

After two long and largely music-free years, church choirs across the Twin Cities have returned in time to celebrate Jesus’ resurrection in song — from Handel’s chorus to the perennial hymn “Christ the Lord Is Risen Today.”

Since scientists first declared gathering to sing a high-risk activity in 2020, choir members have endured shifting pandemic protocols — from chilly parking lot practices and masks that muffled their voices to solitary Zoom rehearsals. Now, most churches have lifted safety restrictions and welcomed choirs back to worship services (though some require choir members to be vaccinated, and many leaders said they were watching community Covid-19 rates).

Whether they’ve been back for months or just a few weeks, singers, directors and church leaders say this Easter is special.

“I think it’s going to be celebratory this Easter time — singing without restraint,” said Bishop Richard Howell, pastor of Shiloh Temple International Ministries in Minneapolis. Having the choir be part of the services will help the congregation feel more at home, he said.

David Mennicke agreed. Mennicke, who directs the chorale at Bethlehem Lutheran Church,said keeping morale up has been a challenge without sacred music.

Virtual choir was a “stopgap,” he said, “not a replacement in any way, shape or form.” If it taught Mennicke anything, it was “just how important having a physical presence with each other is.”

During the pandemic, choir participation online lagged, Mennicke said, but 90% of the chorale members returned when in-person services resumed at Bethlehem’s Minneapolis and Minnetonka locations last September. At first, the choir’s participation in worship services was limited, and its members, like the congregation, wore masks.

This Easter, however, Mennicke’s ensemble will be singing the “Hallelujah” chorus and “Now the Green Blade Riseth” from the balcony, as usual.

“Everyone is joyful,” Mennicke said. “We’re blessed that we’ve been able to stay healthy and have not had any outbreaks in the choir.”

After months without singing together, some choir members said they’re a little rusty and are working to rebuild their voices.

“Quite a few of us, and I include myself in that, have found that our singing skills diminished a little bit, like breath support and being able to sustain long phrases,” said Mark Squire, worship and fine arts director at Hennepin Avenue United Methodist Church. “We lost something over two years.”

Throughout the pandemic, Minneapolis soprano Naomi Staruch kept making music, even when that meant singing alone on mute during Zoom rehearsals, hearing only her voice and the director’s piano notes. Like other members of the Bethlehem Lutheran chorale, she recorded videos of herself singing. The videos were then painstakingly compiled by Bethlehem’s music director to make a virtual anthem.

“Singing my part alone was difficult,” Staruch said. “Singing in a choir is not meant to be a solitary act.”

When Eden Prairie United Methodist Church’s choir returned along with in-person worship last fall, the ensemble had to adapt to singing while wearing masks to comply with the church’s mandate.

Director Peterson also had to adapt the tempo of hymns to accommodate the extra effort of singing in a mask, slowing some sections so singers had time to catch their breath, and speeding up others so they could fit a phrase into one breath. Much of that will now be unnecessary as the choir makes its joyful noise this Easter because masks are optional.

Calvary Church’s Roseville campus, which has both a traditional service with choir and a contemporary service with a band, had live music at Easter services last year. Still, Sunday’s worship will feel like a return to a time without restrictions, said Worship Arts Pastor Tammie Junkans.

“It’s such a joy,” she said. “Even last year, we were limited to the number of people that we could put on the platform. So this feels like a celebration.”

Junkans is looking forward to standing with musicians behind her and the congregation in front when they join in on an arrangement of “Behold Our God.”

“It’s the best place to be, because it’s just this whole incredible big surge of praise,” she said.

In-person worship returned at Plymouth Congregational Church in Minneapolis during Lent. For the first Lenten service in March, organist-choirmaster Philip Brunelle chose the song “Open Now Thy Gates of Beauty.”

“Do you know the word WONDERFUL? With capital letters on every letter?” he said. “It was. People were so thrilled.”

Easter will only bring more joy, he said. Like so many church choir directors in the Twin Cities, Brunelle is eager to hear his entire congregation sing the “Hallelujah” chorus .

“For years, I’ve said to the congregation, ‘You may be inside, but please use your outdoor voice.’ So that they will really burst forth in song,” he said. “And they will. They will.”