Twin Cities Pride celebrates 50 years but with concern about future 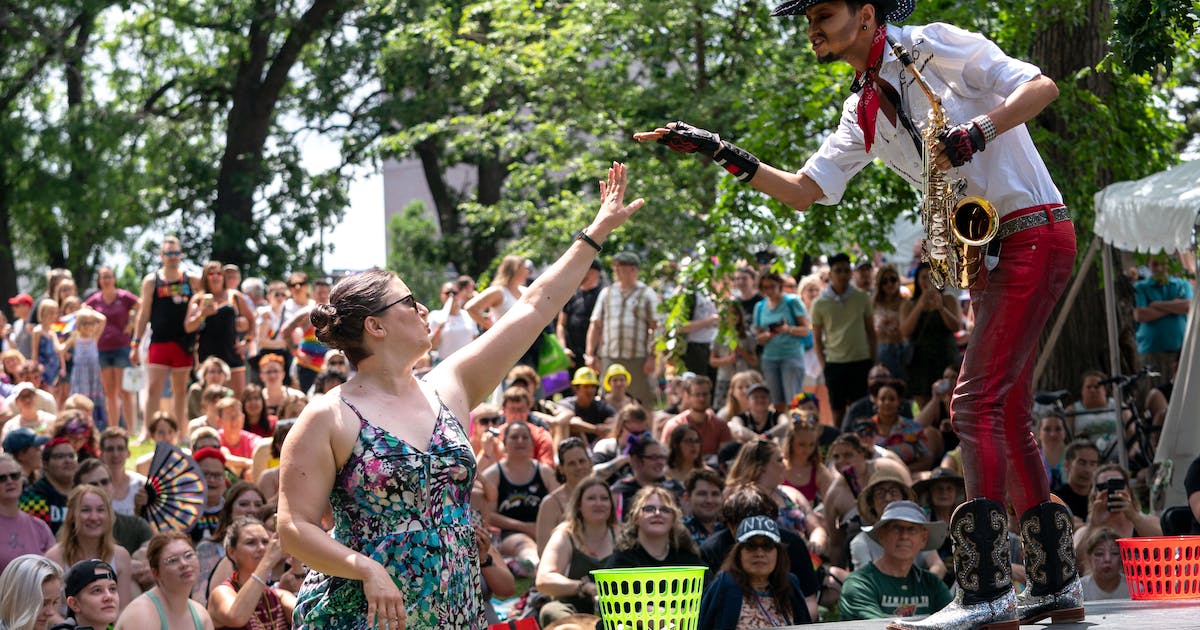 People of all ages clad in rainbow-everything streamed into Loring Park on Saturday to celebrate Twin Cities Pride’s 50th anniversary with hugs, music and flags.

An undercurrent of uneasiness and trepidation was also in the air, as many in attendance expressed concern about the Supreme Court’s overturning of Roe v. Wade the day before. Among the fears was that it would be followed by a further curtailing of rights, including same-sex marriage.

Wearing a shirt that said “This gay pastor loves you,” Rev. Dan Adolphson had a lot of mixed emotions as he sprayed passersby with bubbles near the booth for his church, First Christian Church (Disciples of Christ) in Minneapolis.

“It’s deeply concerning whenever any court tries to roll back rights,” he said. “But I’m also just really happy to be here and to be back out in full with our community and our family because we need to be together in this time and support each other and love each other.”

Adolphson has been a regular at Twin Cities Pride for the last two decades. His first Pride event was in Seattle in 1986, when he was a college student.

Reflecting on 50 years of the event in the Twin Cities, he said: “It’s really exciting, but it’s also a moment for us to remember that we can’t rest on our laurels because there’s still work to do.”

For one, Adolphson said, there’s still a lot of inequality to address, particularly among people of color.

Elizabeth Hockensmith said it’s comforting to be around “people that understand you at your core.” But the Supreme Court decision was also weighing heavily on her mind.

“I think a lot of people are feeling, especially the women and those cisgender women who use the she/her pronouns, feel like we’ve lost a right to our own bodies,” she said. “I think that’s kind of very heavy on peoples’ hearts this year unfortunately.”

This is the first year the Pride festivities have returned in full force since the pandemic led to the event’s cancellation in 2020, and a scaled-back version last year. The march, also back on this year, will be held on Sunday along Hennepin Avenue.

Kris Gildseth of North St. Paul wasn’t sure if she would be able to attend Pride this year, but was grateful she made it with her partner.

“I had never been around hardly any gay people let alone a whole park full,” she said. “So that was like, ‘Wow!'”

Gildseth wondered what her uncle, who would have been in his 90s if he were alive today, would have thought about seeing the such a large celebration this weekend. He was gay and closeted most of his life.

“It’s amazing that we get to be here and experience this,” Gildseth said.

Many have been coming to Pride for years. But there were also lots of others who were attending for the first, second or third time.

This was only the second time Natalie Sosa attended a Pride event. She hasn’t always felt comfortable with her sexuality.

“I kind of want to make up for it by expressing for all those years that I wasn’t able to express myself to friends and family,” she said. “So it’s really nice that there’s just this whole community.”

While she’s excited that there’s been 50 years of Twin Cities Pride, she said it doesn’t seem like that long to her.

Patti Puffer, of Elk River, sat on a hill with her dog, taking a moment to take it all in. A rainbow lei was wrapped around her wrist.

“It’s nice to be with community and people that are like minded” — especially after Friday’s court ruling, she said.

She’s been coming to Pride for 15 years. She grew up in a restrictive, religious household, she said, and didn’t know “stuff like this really existed” when she was growing up.

“I love seeing the younger generation really be able to express who they are much louder than I think my generation was allowed to do,” Puffer said.