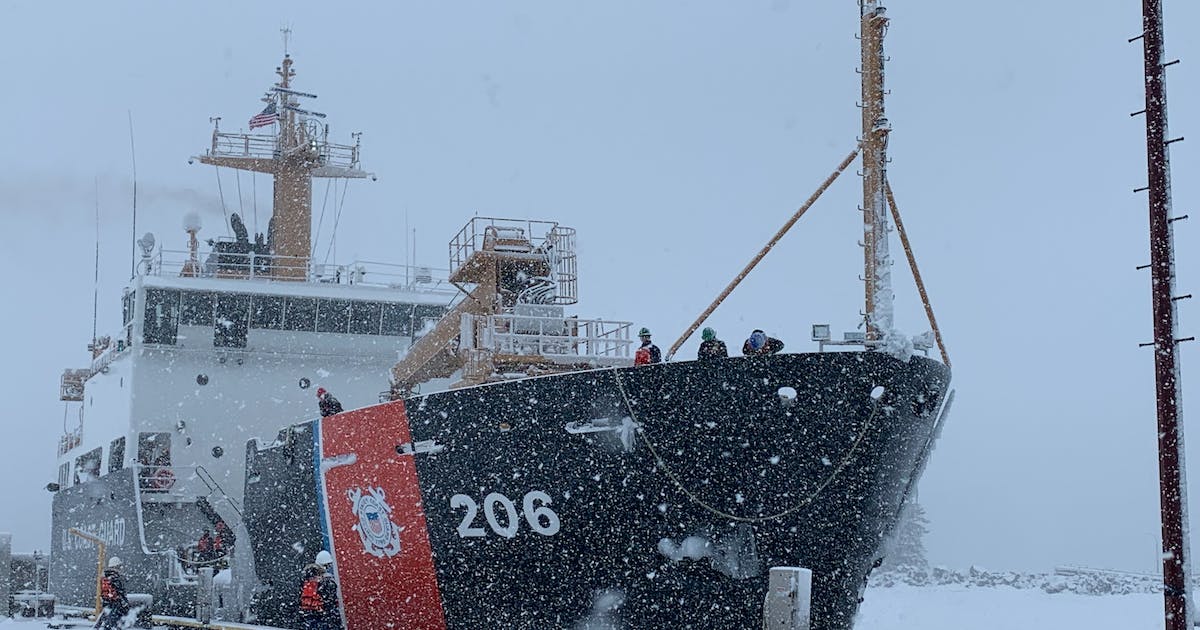 DULUTH — The U.S. Coast Guard cutter Spar, a vessel that has gone through upgrades ranging from auxiliary to aesthetic in the past year, settled in to its new homeport in Duluth on Wednesday — ending a weekslong journey from Baltimore, through the St. Lawrence Seaway and the Great Lakes.

Spar replaces Alder, a similar ship that left Duluth for repairs this past summer, and its crew’s duties include icebreaking, law enforcement and tending to buoys. The vessel needs a bit more exterior maintenance, but as soon as the ice clears, its crew will put out summer buoys in the harbor and on Lake Superior. It is expected to be fully mission capable in the fall. Icebreakers Hollyhock and Neah Bay are both on duty in Duluth.

“It’s a phenomenal feat to bring this ship back from where it was 90 days ago and actually be in homeport,” said U. S. Coast Guard Lieutenant Commander Joel Wright. “It’s a testament to the crew’s work — hard work day in, day out. Seven days a week, some of them 12-hour days, and all of them being away from home.”

Wright said cables were hanging down, the dust was unbearable and the decks were covered in plastic when the crew first got to Spar in January. It looked like a shipyard war zone, he said.

Spar has a new crane, received valve changeouts and the decks were replaced. It was painted, and a watertight door was added so the crew can access the main machinery space. There are new sewage and auxiliary systems.

Lt. Junior Grade Jacob Ricci was part of the crew that dropped the Alder off in Baltimore, though he did not travel back on Spar. He recalled seeing Duluth’s new cutter stripped bare and off the water at the Coast Guard Yard last summer.

“In December she was painted, put back together and put back in the water,” he said. “They do a lot of work and it takes a long time. They’ve got a pretty good system down.”

Along the way, the Spar team met with some crewmembers from the original Spar — a 180-foot buoy tender that was built in Duluth in the early 1940s, homeported in Portland, Maine and decommissioned in 1997. She is now an artificial reef 40 miles off-shore of Morehead City, N.C.

“We got to have them on board, give a little tour, had a little event to honor to their service,” said Kyle Hansen. “It was nice to hear the stories, a lot of old sea stories back and forth.”

Whitefish Bay at the eastern end of Lake Superior was iced over, and Spar worked with Mackinaw, another U.S. Coast Guard vessel, to break through the buildup that had stalled several ships.

Spar, like the slightly-newer Alder, is a Juniper-class 225-foot buoy tender built in Marinette, Wis. Spar was commissioned in 2001 and originally based in Kodiak, Alaska. It left in 2020 for the Coast Guard Yard for a systems evaluation and major repairs. Alder left Duluth in June 2021 for Baltimore to undergo similar repairs, and it is expected to settle into its new homeport in San Francisco this summer.