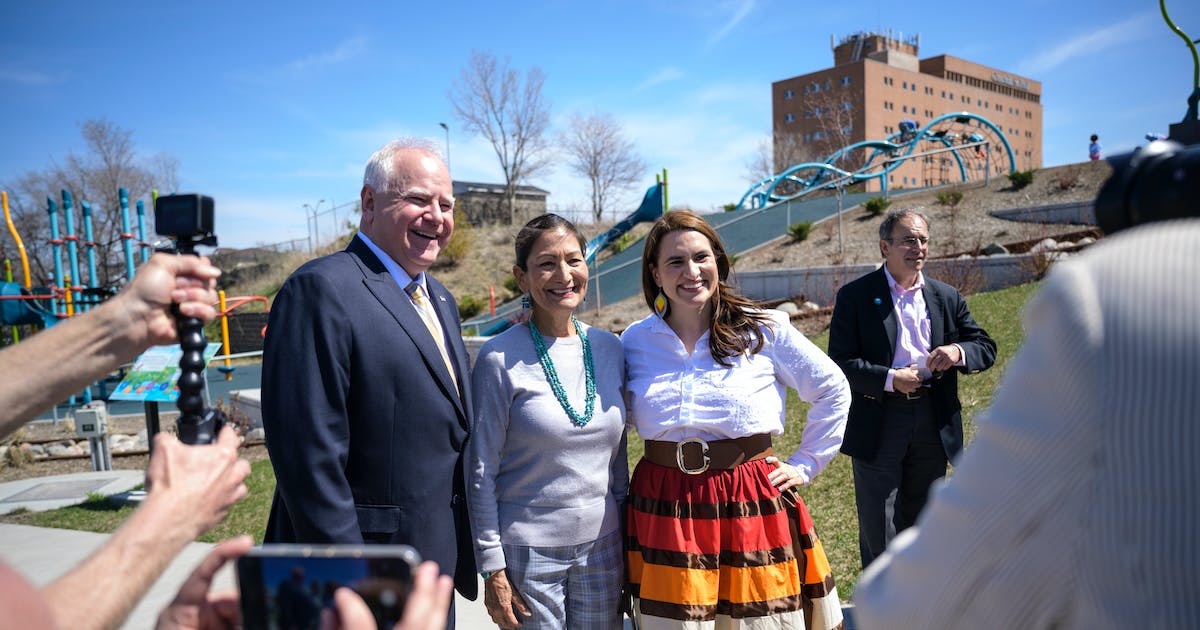 Urban communities across the country need access to parks that allow their residents to enjoy the outdoors too, U.S. Interior Secretary Deb Haaland said during a Minnesota visit Friday, as she announced federal spending on grants for parks that are likely to benefit some in the state.

“These investments made possible by the Land and Water Conservation Fund will go directly into cities and communities for the renovation of urban green spaces and the creation of new parks and trails across our neighborhoods,” Haaland said at St. Paul’s new Midway Peace Park, where she was joined by Gov. Tim Walz, U.S. Sens. Amy Klobuchar and Tina Smith, Rep. Betty McCollum and other Democrats.

The $61.1 million in grant funding announced Friday will be made available to 26 U.S. cities, with three Minnesota parks in the running to receive $9 million. It comes from the Outdoor Recreation Legacy Partnership, which was created in 2014 to create outdoor recreation for urban communities.

“This is the biggest amount of funding for this program yet,” Haaland said.

The Minnesota parks poised to receive funding if their final applications are approved are Soldiers Field Park in Rochester, Rice Recreation Center in St. Paul and Willard Park in Minneapolis.

McCollum highlighted how Peace Park, which used to be a parking lot, now features a basketball court and playgrounds, offers a safe place for children to explore in an area that was previously neglected, and came about partly thanks to a grant from the federal government.

“The vision coming from this program in [Washington] D.C. to create these spaces in community is incredibly valuable,” Walz said. “We know there is a legacy of neglecting certain spaces and certain people. We can’t have anybody be invisible.”

If Rochester’s full plan is approved, Soldiers Field Park will receive $5 million to expand its amenities which serve “a diverse, economically-distressed population with poverty levels reaching nearly 40%,” according to a news release from Haaland’s office. The funding will include pools, an inclusive playground and trail connections.

“This administration, and in particular Secretary Haaland, has put up roadblocks at every instance,” Stauber said at a state Capitol news conference with mining advocates and local officials. “She can find time to come to the metro area to talk about parks and trails, yet refuses to come up to northern Minnesota and look in the eyes of the families of the miners that are ready to mine these critical minerals.”

The Biden administration in January canceled two mineral leases for the Twin Metals copper-nickel mine near the Boundary Waters Canoe Area Wilderness, which former President Donald Trump’s administration had reinstated. The White House is also considering a 20-year moratorium on mining in the Superior National Forest near the BWCA. Haaland is likely to decide before the end of the year whether to halt mining on the more than 200,000 acres of federal land.

At the news conference, Haaland declined to comment on the question of whether the White House would declare a moratorium on mining but said she would like to visit northern Minnesota.

“As you know this is a really important ecological area, not only for Minnesota but for the entire country,” Haaland said. “I think it’s important for us to make sure that whatever activity is happening on that important land that we assess to make sure we’re not doing anything that will harm the land.”

It was not the first time Stauber, who represents Minnesota’s sprawling northern Eighth Congressional District, has called out Biden’s secretary of the interior.

Stauber attempted to build opposition to Haaland’s appointment after she was announced as the nominee, calling her a “direct threat to working men and women.” Leaders of American Indian tribes in Minnesota quickly condemned those comments about the country’s first American Indian Cabinet secretary last year.

But Stauber doubled down on his rebuke of Haaland on Friday. His comments come as he is running for re-election in a district that was redrawn in the last redistricting cycle and now includes all seven of the state’s Anishinaabe tribes, which were previously divided between two seats.

“It’s important that we communicate with all parties involved, including our Native American tribes. And that is a priority,” Stauber said Friday.

Outdoor recreation, the purpose of Haaland’s visit, is important, Stauber said, but he added that he’s asked the secretary twice in the past six months to visit northern Minnesota to talk to mining communities, which he said is “just as important.”