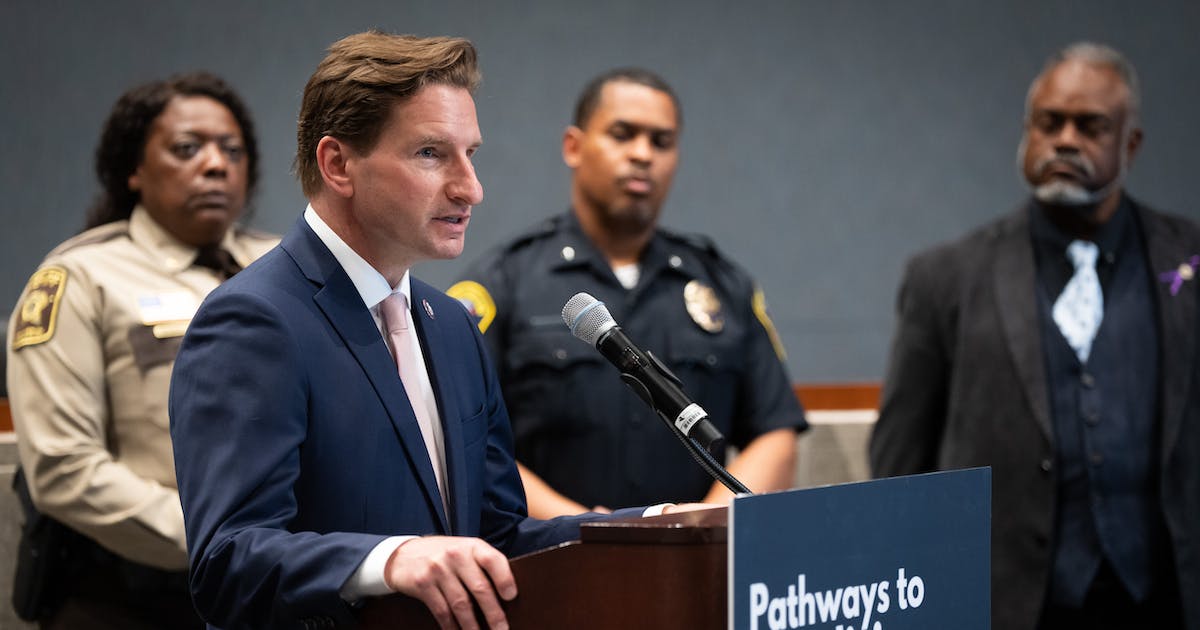 A Minnesota model to recruit and retain more-diverse law enforcement candidates could soon go national under proposed legislation aimed at beefing up depleted police ranks across the country.

U.S. Rep. Dean Phillips, D-Minn., is leading a bipartisan push to pass the Pathways to Policing Act — patterned after a six-year-old Minnesota initiative — amid an ongoing nationwide shortage of officers. The proposal would focus on finding candidates who might otherwise pursue other lines of work, while launching a national marketing and recruitment blitz.

“Law enforcement agencies in the Third District and all around the country are having a terribly difficult time recruiting quality applicants and hiring them and retaining them for their careers,” Phillips said Tuesday at an event in Bloomington to spotlight his legislation.

“The message was unbelievably clear: The pipeline of qualified candidates who would want to be law enforcement officers has simply dried up over the past few years.”

The 2020 murder of George Floyd in Minneapolis and the international unrest that followed have been blamed for a subsequent exodus of police officers and sagging public confidence in the profession.

Phillips’ bill would give $50 million to the Department of Justice to lead national marketing and recruitment campaigns similar to successful military enlistment efforts. The department would also be required to share resources in support of the campaigns run by state and local agencies.

The bill places special emphasis on encouraging candidates from communities traditionally underrepresented in law enforcement. The proposed program also would create an entry point into the profession for people with two- or four-year degrees in other fields and help those entering law enforcement pay for needed training programs.

Priority for state and local grants would be given to agencies or governments that show they are trying to recruit candidates from underserved communities or those with nontraditional education or career backgrounds. Priority would also be given to departments that would seek candidates who live in or would be willing to move to the communities they would serve.

Phillips highlighted the legislation inside the Bloomington City Council chambers, flanked by state and local law enforcement leaders and representatives from Minnesota’s police lobbying groups. The measure has the support of the Minnesota Chiefs of Police Association, Minnesota Police and Peace Officers Association and organizations representing police chiefs and sheriffs in the state.

In Minnesota, legislation designed to recruit and retain police officers stalled in May when the Legislature adjourned for the year without an agreement on competing public safety spending bills.

So far, there’s been no word whether a special session will be called to allow lawmakers to finish up such work.

State Public Safety Commissioner John Harrington on Tuesday voiced his support for Phillips’ legislation. He said law enforcement and first responders across Minnesota have told him “they did not have enough people to answer the calls that were coming in, much less the surge in crime and the surge in need that we’re seeing from the community.”

“Whether it is mental health calls, calls around carjacking, what we’ve all seen is this increased volume of need,” Harrington said. “And what we have not seen is the resources necessary to respond to that need.”

The Minnesota program started in 2016 as a partnership between the Bloomington and St. Louis Park police departments. It has since been used during five rounds of hiring across about a dozen agencies in the state.

“As we continue to re-evaluate how law enforcement services are delivered, it remains critically important that we hire the right people to do this work,” said Jeff Potts, executive director for the Minnesota Chiefs of Police Association and a former Bloomington police chief.

“Research has shown us that it’s much easier for police departments to build deep trust and deeper relationships in the community when the department is more reflective of the community that they serve.”

Phillips’ bill does not yet have a companion in the Senate. But the congressman is optimistic that the early bipartisan support is indicative of its chances to reach President Joe Biden’s desk.

“There is not a member of Congress who is not hearing the same damn thing in their districts all around the country,” Phillips said, speaking on the needs expressed by law enforcement leaders.

“And rest assured they are all listening to their chiefs and to their officers. This is an example of what you do when you hear what’s going on.”