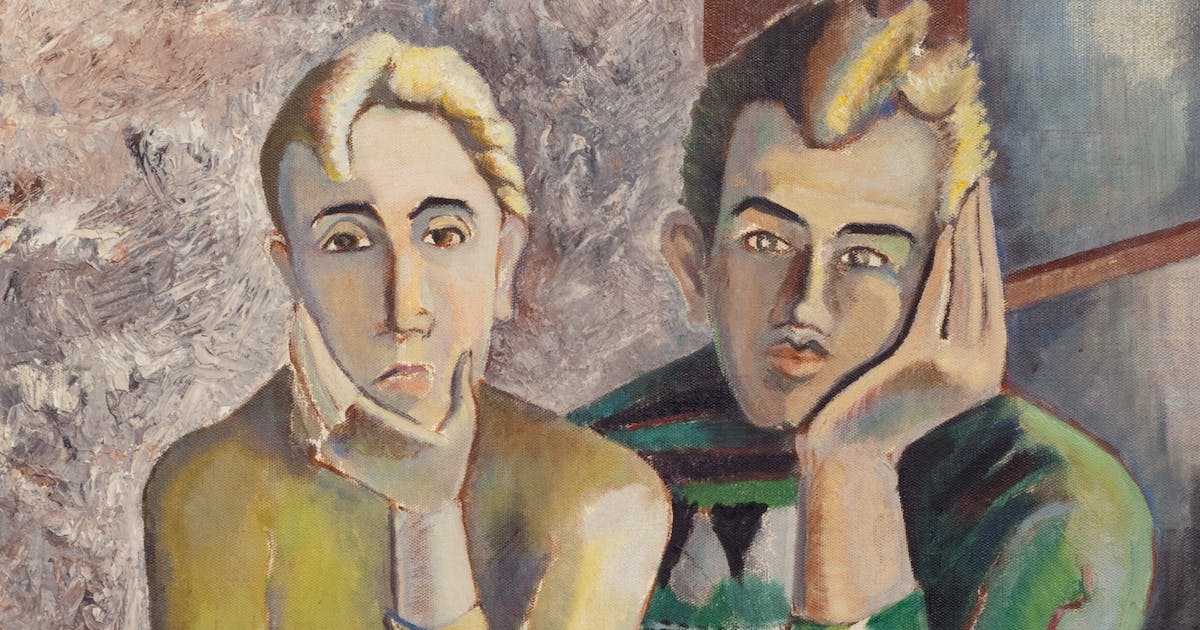 A photograph snapped nearly 100 years ago of artists in a Parisian studio shows Minnesota expatriates Clara Mairs and Clement Haupers sitting between a discreetly nude model and a young man cradling a human skull (tinyurl.com/MairsClements).

The 1923 image offers an amusing glimpse back at an unconventional and influential couple who etched, taught and painted their way into Minnesota’s 20th century art scene.

Mairs was born in Hastings in 1878, a full 22 years before Haupers was born in St. Paul. She likely met him while organizing the Art League of St. Paul in 1918 to reverse the local shortage of figure models.

Unmarried, they lived and traveled together from the 1920s until her death in 1963 — creating art in his childhood house that they moved a couple miles northeast from Randolph Avenue to a lot she owned on St. Paul’s Ramsey Hill.

After they returned in 1929 from the swirl of the Paris art world and a jaunt to Algeria, Haupers taught at the St. Paul School of Art and served as superintendent of the Minnesota State Fair’s Fine Arts Department from 1931 to 1942. That post helped him become state director of the Federal Art Project in 1935, when the Works Progress Administration (WPA) employed artists during the Great Depression.

“For more than 40 years they traveled, exhibited and lived together as life partners,” while Haupers “pursued relationships with other women and men,” according to Katherine Goertz’s profile on MNopedia.com. “Because of the difference in their ages and the ambiguity of their relationship, Mairs and Haupers remained always a bit of a Twin Cities scandal.” That ambiguity showed up on Haupers’ World War II draft card, where he listed Mairs as his next of kin (with “sister” crossed out).

Born in 1900, Haupers was the second of three children of German-born parents. His father, George, worked at a wagon factory, while Clem was a railroad ticket office clerk before the art world beckoned.

Haupers “was easy to talk to, a regular fellow with a very nice disposition,” said George Bassett, 95, a sculptor who lives in Winnebago, Minn., and whose busts of Hubert Humphrey and Martin Luther King Jr. grace the State Capitol.

While a student at the College of St. Thomas in the 1940s, Bassett met Haupers while hanging one of his paintings at the school. Bassett once posed for Haupers but never saw the finished portrait, and Haupers hired Bassett to paint the windows of the home studio he shared with Mairs at 377 Ramsey Hill.

“They’d listen to classical radio symphonies on Sundays,” Bassett recalled. “I remember how he’d dress up in a Panama hat and sports coat to drive her downtown.”

Mairs’ etchings were featured in national touring shows in the 1920s and ’30s, but she also painted scenes and people — including a self-portrait titled “Clara and Clem” from 1930. Haupers painted rural landscapes and became renowned as an art teacher, counting flamboyant impressionist LeRoy Neiman among his most famous students.

“They must have been a very striking pair, this older woman and younger man living together without the benefit of marriage,” then-Minnesota Historical Society art curator Tom O’Sullivan said in 1988. “They really flaunted their individuality.”

Mairs lived and painted in an upper-floor studio of the three-story, garden-lined stucco house they shared on Ramsey Hill, while Haupers created art in a huge studio downstairs. They painted fanciful raccoons, owls and trees on the stairway between their studios. Friends said Mairs would padlock the stairway door when he drank too much.

Still exhibiting her work two years before her death at 85, Mairs told the Minneapolis Star in 1961 that her life had been “uneventful. I didn’t cut off an ear and send it to my lover like Van Gogh or marry a 13-year-old girl like Gauguin did. People were interested in their paintings partly because of the horrible things they did.”

People were “fed up with abstractions,” Mairs said — an opinion her partner shared. Haupers once said of Cubists like Picasso that “when I can get into bed with a square butt, I’ll paint one.”

Not that he was a dour curmudgeon. To meet expectations people had for artists, he would don a red beret and puff on cigars. He was known to pack his 12-cylinder automobile with paintings and drive into rural Minnesota, bringing art to the people. He died in 1982.

“His sense of humor was a key part of his art — as well as the rest of his life,” said O’Sullivan, who owned dozens of pieces by both Mairs and Haupers. “He was not a deeply philosophizing artist, but he lived his whole life doing virtually whatever he wanted to do and the rest of the world be damned.”