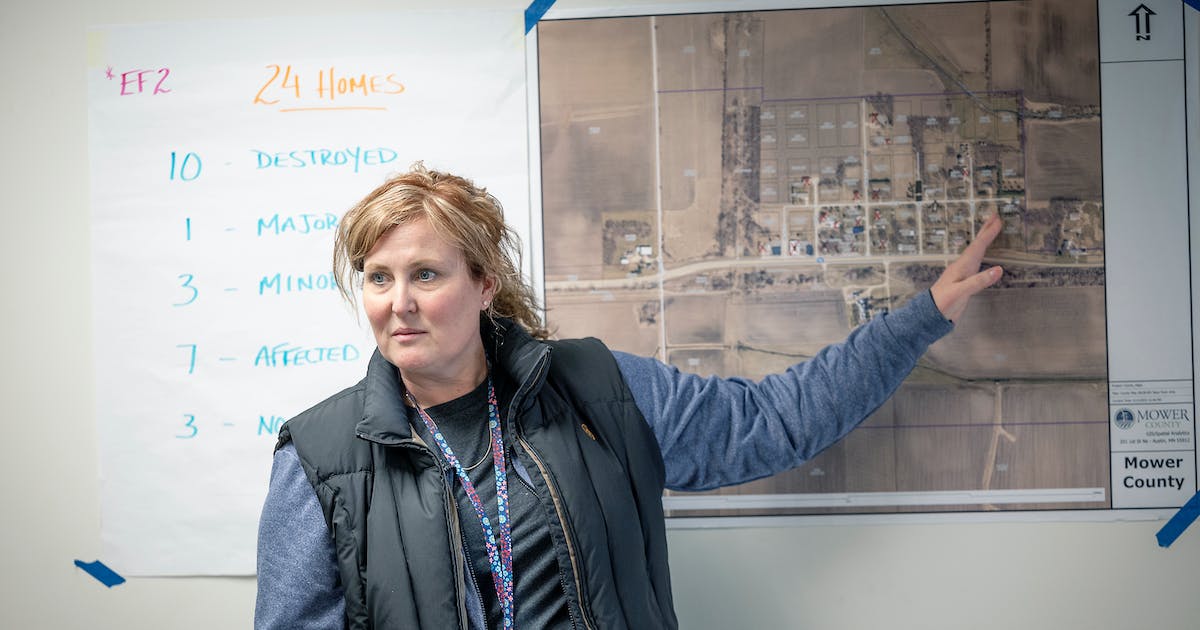 TAOPI, Minn. — No tornado sirens blared. Some heard notifications on their phones or from the TV, while others had little to no warning before an EF-2 tornado left this small town near the Iowa border reeling.

Terry Voigt’s house doesn’t have a basement. The 64-year-old had to lay on the floor with the dog as the tornado ripped off his roof.

Voigt was among the homeowners, volunteers and emergency personnel braving bitter winds and freezing cold to clean up Thursday.

“Get rid of the pile, and kind of get rid of the memory,” said Ted Kiefer, whose home was slightly twisted off its foundation. “We’ll go see what the neighbors need help with, and one thing at a time.”

Mower County Emergency Management Coordinator Amy Lammey said 10 of the town’s 24 homes were destroyed, about $800,000 worth of housing stock. Others were left wondering whether the damage to their houses would prompt insurance adjustors to condemn their properties.

“We’re just waiting to see,” said Kiefer, who has an 8-foot gash in his roof and whose storage shed no longer exists.

Local and state emergency officials said Taopi’s public infrastructure likely sustained enough damage to warrant state or federal disaster aid. But homeowners must rely on insurance and their savings to rebuild, which could take years.

Gov. Tim Walz, who toured Taopi on Thursday afternoon, vowed to ensure the community receives assistance in the coming months as it looks to rebuild.

“We’ve got to make sure as far as state, local, county and communities that we don’t move on until it’s done,” he said.

Walz expressed concern over the lack of a tornado siren in the Taopi area. Parts of rural Minnesota are either without the sirens or without the money to fix the ones they have.

Taopi Mayor Mary Huntley’s 94-year-old mother found shelter in her house during the storm. But Huntley said her mother owns a flip phone and wouldn’t have known what to do if it was the only source of her warning.

Joe Kelly, director of Minnesota Homeland Security and Emergency Management, said the Legislature may consider funding a future program to repair or install sirens in the more rural parts of the state so residents can be better prepared.

Huntley said the town has received plenty of help with volunteers, food and water. She encouraged folks to donate to a fund set up at the United Farmers State Bank in nearby Adams while the town figures out how to move forward.

“We’ll build back bigger than before,” she said.

The weight of their loss

Kiefer and his family got to work as soon as the sun rose Thursday. Kiefer was the hardest hit out of all his brothers, which meant there was much more to clean.

He is still hopeful that his tractor runs well enough to plant corn with his brothers, father and cousins on the 1,800 acres they own or rent.

Jeremy Kiefer, Ted’s nephew, said he was given the rest of the week off from his job in Rochester so he could help his family.

Yet there was only so much to do outside on a miserably frigid day.

Mower County officials kept the volunteers inside the town because of the safety risk posed by county workers operating heavy machinery. The whipping winds, with gusts more than 40 mph, deterred a lot of outdoor work.

For every task completed, another sprouted up. There were dumpsters to order, debris to clear out, equipment to drive to repair shops.

For some homeowners, the weight of their loss started to set in. Terry Voigt bought his home a little more than a year ago after living down the road. He’s a longtime Taopi native who decided to return to his hometown.

Voigt’s home is destroyed. The remaining walls are fast degrading. He has a place to stay with his daughter, but he’s only starting to come to grips with losing his home.

“Today is the hardest yet,” he said.

Voigt said he was touched when a group of 15 volunteers from Lime Springs, Iowa, started cleaning up his yard.

Brady Voigt lives with his husband, Nick, a couple houses away from Terry. Brady dealt with insurance adjusters Thursday morning who surveyed the damage to his home: broken windows, cracked walls, water damage to his ceilings, glass and debris all around.

Ted Kiefer kept himself busy throughout the day working either on his property or on a neighbor’s. In a quiet moment, Kiefer admitted to worry about his wife, Jill, who’s staying with her sister.

“Just the mental toll is bad for all of us, but I think it’s bad for my wife especially,” he said. “It’s that sense of hopelessness and where do you turn, what direction do you go in?”