Want some chickens with your Airbnb? Locally Laid is at your service 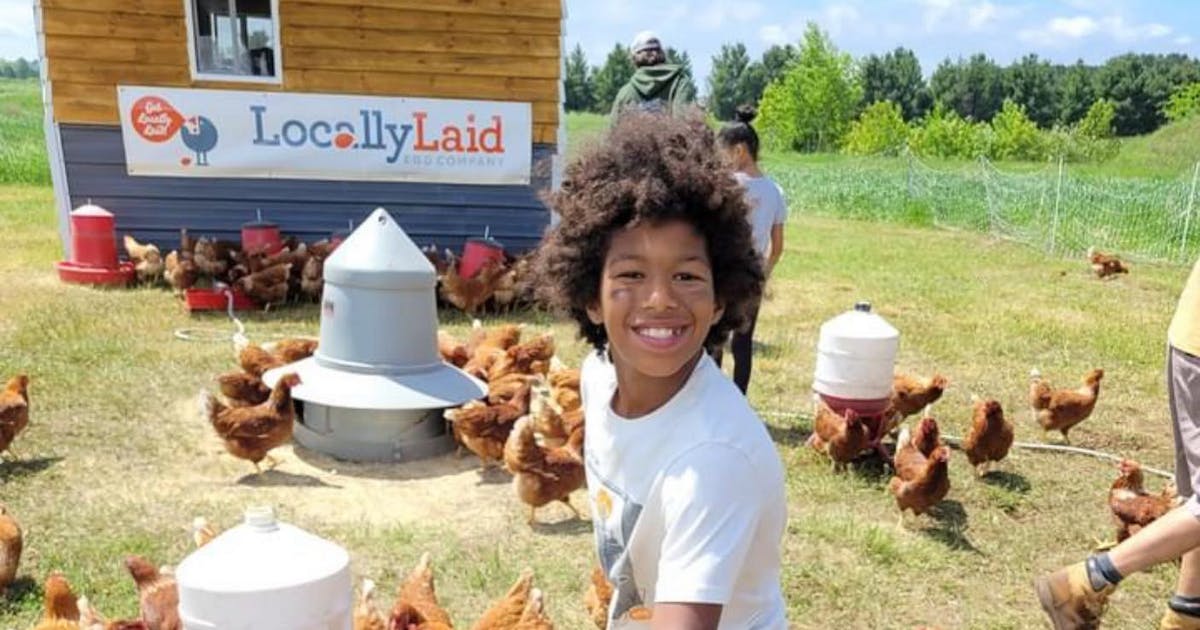 WRENSHALL, Minn. — The owners of a popular northern Minnesota egg company are offering the chicken-curious a chance to escape to a vacation spot within their flock.

Jason and Lucie Amundsen recently went live with their listings on Airbnb — or “Airb-n-bawk,” as its keepers cutely call the new rustic getaways built on their northern Minnesota farm — home of the Locally Laid Egg Co. A stay costs between $60 and $170 a night and comes with optional chores ranging from mucking the coops to taking the eggs to the farmers market. Guests who check off the items on the chalkboard chore chart get Locally Laid swag, but there is no shame in lounging, according to Lucie Amundsen.

It’s been a boon for the Amundsens, who recently went out to dinner while the guests put the chickens to bed. They didn’t have to set an alarm for the next morning either.

Since posting the listing, she said, they’ve booked guests every day.

The opening of the new spaces — the Perch is a treehouse-style loft and the Nest is a bunk within an active coop — coincides with the company’s 10th anniversary, but it’s an idea that Lucie Amundsen said she has been thinking about since reading of guests at an Airbnb in Scotland who slept in an apartment above a bookstore where they worked during the day.

“I’ve been saying to Jason for years that we could do a version of that and it would harness all these people who want to delightfully show up at the farm,” she said.

Locally Laid was a backyard poultry hobby that in the past decade has grown to become a source of eggs for regional and Twin Cities-based stores and co-ops. The company partners with eight other farms with farming methods that match their own, where chickens are free to roam on rotating pastures. The cheeky name is on-brand for the team that favors puns and a touch of irreverence. During a recent beer festival, the company’s owners hosted Chicken Poo Bingo.

The Perch is a tiny house about 5 feet off the ground. There isn’t running water or a stove, but there are jugs of water, portable burners and an omelet station in the small kitchen. It sleeps five people and has a trapezoid window and deck that overlook the pasture.

“I think one of the coolest things people can do is wake up a half-hour after sunrise, open the doors and 400 chickens come out,” Lucie Amundsen said. “Free the birds.”

To that end, there is an old-school crank-up red rooster alarm clock on the night stand.

Guests have access to a hammock and fire pit, bins of work clothes and shoes, a solar shower and an outhouse.

The Nest is the more minimalistic option. It’s a one-room bunkhouse, only thick glass away from the Lolas — the universal name the Amundsens have given their chickens and a truncated version of the company name.

The space was born of the need for a new coop — and an idea to make it multi-use.

“Why don’t we build something that is two-thirds for people, and one-third for chickens,” Jason Amundsen recalled thinking. “Kind of this idea of bunking with the birds came together.”

He was purposeful in creating a well-sealed habitat where visitors can see the chickens as though they were in an aquarium, but not smell them.

Lucie Amundsen put the finishing touches on the spaces shortly before the first guests arrived last weekend. She tucked in sheets decorated with chickens, snapped a gingham tablecloth into place on the picnic table, and propped up the chalkboard chore list.

The Wynn family, in town from St. Paul for a baseball tournament, brought five guests — including three kids between the ages of 8 and 16. Courtney Wynn said she had a hard time finding a reasonably priced hotel in Duluth for the weekend. As a fan of “glamping,” a camping trend in which amenities are provided, the listing appealed to her.

“We’ll chicken farm a little bit and get to the tournament,” she said, adding that it would be a change from hanging out at the hotel pool between games.

Wynn later posted a positive review on Airbnb about the lasting memories and accommodating hosts, though she did warn guests to bring cleansing wipes and bug spray.

The Amundsens, who made the shift from desk jobs to acreage more than a decade ago, have always been transparent about the ups and downs of farm life. Lucie Amundsen’s memoir, “Locally Laid: How We Built a Plucky, Industry-Changing Egg Farm — From Scratch,” is the story that starts with her husband’s wild idea to buy a bunch of chickens and her own initial reluctance.

The Airb-n-bawk is another way to reach future farmers, Lucie Amundsen said. The hosts are on-hand to answer questions about, as they call it, “the egg-onomics” behind this level of farming. The hands-on experience, in the guise of a weekend getaway, could make or break a big idea.

“I feel that this either cements the poultry dream to move forward,” Lucie Amundsen said, “or it’s going to be the farm contraception I was desperately looking for 10 years ago.”