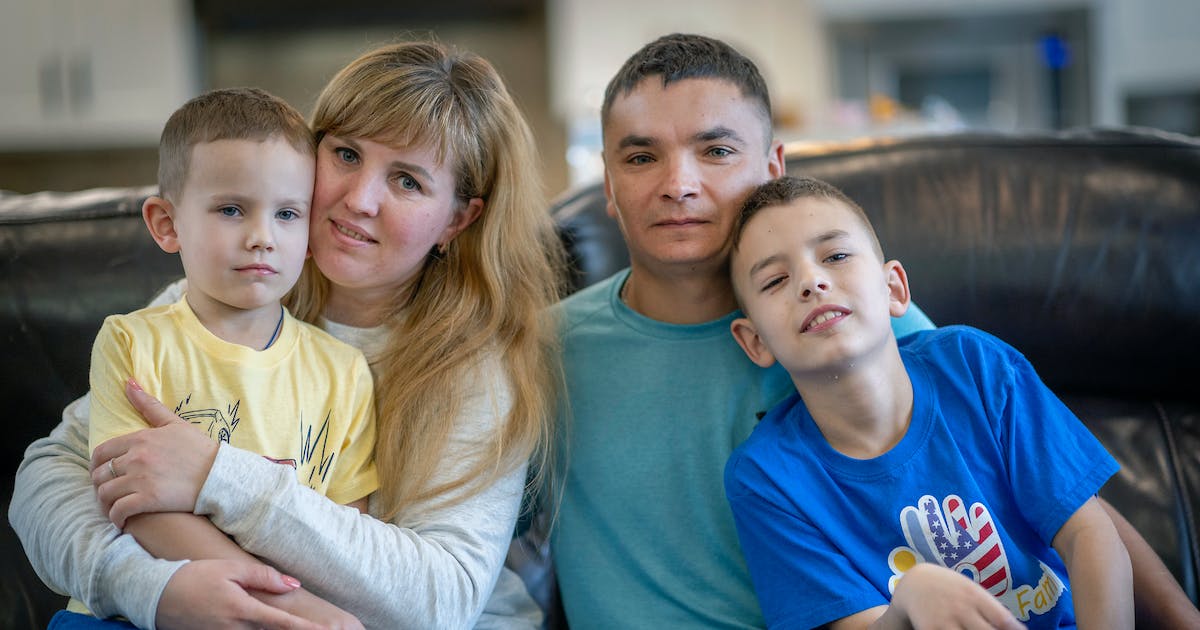 From the serenity and safety of a lake home near Pelican Rapids, Minn., a family of Ukrainian refugees is staying glued to their screens, scrolling for bits of familiarity and glimmers of hope amid the Russian invasion of their hometown and country.

Olesia Zlochevska and her husband fled Ukraine with their two children a few weeks before the war started, with the help of a Minnesota friend they met through a relative. Now their main connection to home are internet photos and stories of tanks and bombed out buildings on news sites and friends’ social media feeds. Zlochevska cries often as she attempts to process her home’s uncertain future from across the world.

“At times I can’t even sleep because the news keeps me up,” she said through an interpreter. “I try to repost my friends’ posts. It gives me [a] sense of peace that I am doing something to spread awareness on what’s happening.”

Residents in and around Pelican Rapids have rolled out the red carpet for the family, which fled Chernihiv, a city close to the Russian border that faced severe damage at the onset of the war and continues to see fighting. After an arduous journey to the United States, they are trying to make the best of an unfamiliar life on the Minnesota prairie.

A couple dozen strangers carried blue and yellow balloons and cheered the Zlochevska family when they arrived at Hector International Airport in Fargo earlier this month. As others learned their story, chronicled on Gina Nelson’s Facebook page “The Journey to Safety,” kindness followed, from monetary donations to a meal at Texas Roadhouse.

The family said in a translated interview that they like Minnesota so far and were happy to receive so much support — from both strangers and friends. The Zlochevskas are taking it one day at a time.

Nelson’s connection to Ukraine began a few years ago when she participated in an “orphan hosting” program shared with her by a friend, Irina Christenson, who immigrated to the United States from Ukraine 24 years ago. The program brought Ukrainian youth to the United States for several weeks during the holidays.

It’s how Nelson met a boy named Ruslan, now 19, who had no parents of his own. Though she was unable to formally adopt him, the two remain close. “We fell in love with Ruslan,” Nelson said.

Nelson became his advocate, and the two visited one another over the years. Through him and Facebook, Nelson became friends with Ruslan’s older sister Olesia. The two siblings had never met, but as Nelson and Ruslan became closer, Nelson felt it was natural to help her adopted son’s family; she even put Olesia through makeup school.

In January, Nelson pleaded with all of them to leave Ukraine. At her insistence amid rumors of the war, the Zlochevskas — Ruslan, Olesia, her husband, Vova, and their two young sons Artur and Roman — fled to Istanbul, Turkey, later that month. Not truly believing war was coming, they took only their backpacks with a change of clothes, confident they would soon return to Ukraine.

After several days of quiet, Ruslan chose to go back to Ukraine.

Then everything changed the morning of Feb. 24, when explosions were reported and Russian troops rolled against Mariupol and other Ukrainian cities.

“I remember just waking up and … being just in disbelief that that’s actually what’s happening,” Olesia said. “And that’s when we understood there is no way we can go back at this point.”

Half of their friends fled the country, and others evacuated to villages outside of Chernihiv. Nelson and the Zlochevskas went days without hearing from Ruslan.

Nelson helped the low-income family buy flights to Tijuana, Mexico, where they planned to seek asylum at the U.S. border. Nelson met them at the border hoping to be their sponsor, before learning that the border remained closed to asylum seekers due to Trump-era COVID-19 precautions.

The family was detained by the U.S. Border Patrol in crowded cells for two days, then released to the Nelson family.

“They were fleeing their country that they love,” Nelson said. “They did not want to do this.”

Thursday, President Joe Biden announced that the U.S. will accept up to 100,000 Ukrainians fleeing Russia’s invasion.

Nelson had nearly drained her savings to help the family before others heard their story and chipped in.

“They just need a chance in life. Even in Ukraine, they just needed some help,” Nelson said. “Ukraine is a difficult country to become successful. … The opportunities aren’t there unless you have money.”

Now the family is working with a lawyer to seek temporary protected status or asylum while getting comfortable in Nelson’s basement a few miles outside of Pelican Rapids. On one of the trees behind the house is a heart Ruslan spray-painted years ago.

The Zlochevskas’ son Artur, 9, started school this week and was excited to begin making friends and learning English. Pelican Rapids Schools are diverse and equipped to work with kids who do not speak English, Christenson explained.

The city is accustomed to welcoming new Americans, too; About half the town’s residents are people of color, according to Minnesota Compass data. Many immigrants work at a turkey-processing plant in town and some have started their own businesses. Small towns surrounding Pelican Rapids are home to about 50 to 60 Ukrainian and Russian people, Christenson said.

“I think that’s really what helps them a lot, too, when you have that support from others,” Christenson said. “We just have to take it a day at a time just like people in Ukraine — but under a peaceful sky here — and do what we can to make them feel safe, to make them feel comfortable.”

As the assault on their homeland continues, the family hopes to stay here for the sake of their sons.

“If we didn’t have our kids here and it was just the two of us, yes, we would have went back because all our life is there, really,” Olesia said. “Our friends are there, everything is there.”