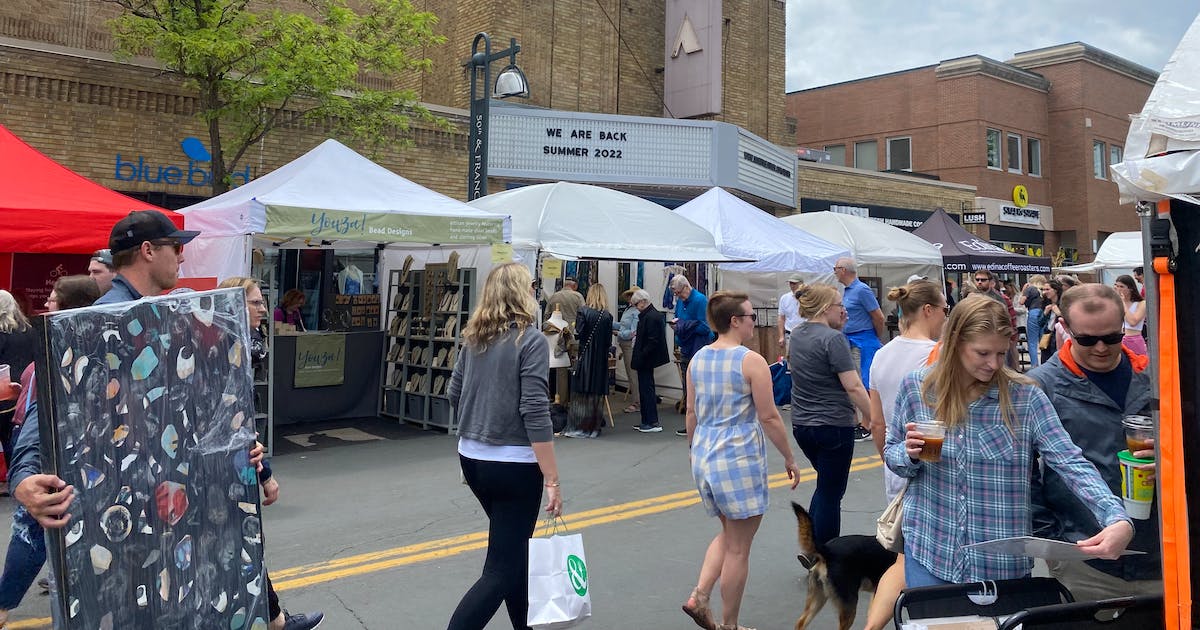 An estimated 300,000 visitors flocked to the Edina Art Fair over the weekend, kicking off a summer of art fairs returning to the Twin Cities after a two-year hiatus caused by the pandemic.

On Sunday, the 50th and France commercial district filled with the sweet scent of kettle corn. Children in wagons and strollers enjoyed colorful snow cones as they rolled through rows of 300 vendor booths selling art and food in what will be a familiar scene at a dozen other art fairs around the metro.

“It’s really one of the kind of ‘kickoff to summer’ events for our region,” said Max Musicant, acting director of the 50th & France Business Association.

Musicant said the theme for this year’s 55th annual fair was the Art of Community.

“Community and being together has never been more important, and people are so hungry for that after these last two years,” he said. “It’s so exciting to be able to welcome back artists from around the region and the country, as well as visitors from the surrounding neighborhoods and around the state that come in to visit the Edina Art Fair.”

Reintroducing the fair after the hiatus meant showcasing many new storefronts and restaurants that have popped up in the district the past two years, like Stalk & Spade, a 100% plant-based restaurant, clothing stores Altar’d State and an expanded Evereve.

The Edina Cinema marquee read “We Are Back Summer 2022,” after the historic theater closed during the pandemic. It is re-opening soon with new owners who are fully renovating the space.

“It’s a wonderful way to reintroduce people to 50th and France and showcase all the new, wonderful things that are here the rest of the year as well,” Musicant said.

New to the fair this year was a kids coloring contest, as well as a showcase for emerging artists intended to celebrate and uplift up-and-coming Minnesota artists who provide diversity of perspectives, backgrounds and ideas.

The artists include Indigenous painter and sculptor Inkpa Mani, and Teeko Yang, a jeweler who celebrates a community supporting authenticity, femininity and diversity.

Samuel Fleming, 25, of Minneapolis was among the three featured emerging artists who earned an award of excellence from the fair art jury. His hyperrealistic pen and ink works explore history and social justice.

On Sunday, Fleming was working on a commissioned jazz drawing for a client in Chicago, where he attended his first art fair in 2016 at the Wells Street Art Festival. He said his first time at the Edina Art Fair was his most successful art fair yet. He sold out of quite a few prints and gained more followers on his budding Instagram.

“I can communicate with people in a unique fashion,” he said of his art. “It’s fun and I’m passionate about it.”

The artist who has his undergrad in economics, is earning a master’s degree in architecture from the University of Minnesota.

“It’s a bit more rigid. I mean, there’s math. But here, you get to be completely free and creative,” he said.

John Anderson, 59, of Richfield, said he’s been going to the Edina Art Fair for about 20 years, which is as long as he’s worked at Edina’s Lunds & Byerlys. The parking lot of the grocery store was packed with food trucks over the weekend, and he said his regular customers ditched the store for street food.

“Most people like to get outside and be with people again,” he said as he munched on a corn dog. “It’s good for Edina … a lot of walking and eating.”

Art fairs are slated next weekend in Roseville, Excelsior and White Bear Lake as well as the Shadow Falls Art Fair in St. Paul.

The Stone Arch Bridge Art Fair is back June 18 and 19, followed by Columbia Heights’ Community Art & Info Fair on June 23 and the Eagan Art Festival on June 25 and 26.

In September, the Fourth Annual St. Louis Park Art Fair takes place on the 10th, the same weekend as Edina’s Fall Into the Arts Festival at Centennial Lakes Park.