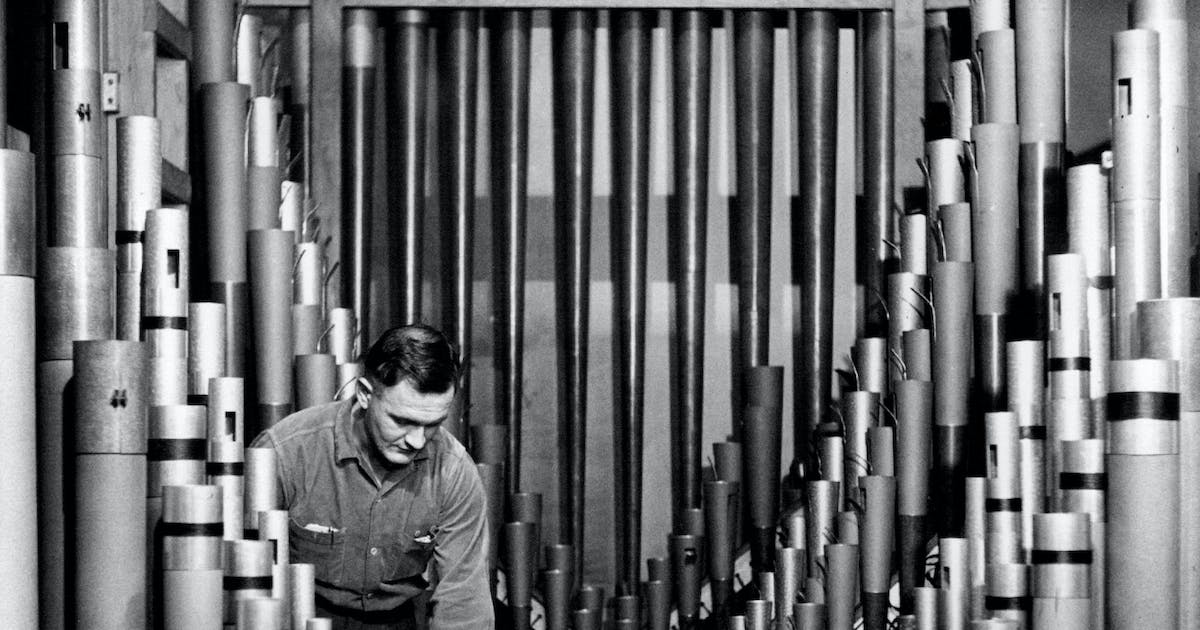 One of the largest pipe organs ever produced in the United States was the pride of Minneapolis when it debuted nearly a century ago. Audiences at the Minneapolis Auditorium didn’t just listen to this thunderous instrument. They felt it.

But the grand pipes of the “Mighty Kimball” fell silent three decades ago — banished to storage at the Minneapolis Convention Center, which now occupies the former site of the auditorium. And some wonder if it will ever be heard again.

“It seems like a waste to have some big, beautiful instrument, sitting in boxes,” said Plymouth resident Tyler Breuch, one of several people who sought answers about the whereabouts of the instrument from Curious Minnesota, the Star Tribune’s reader-powered reporting project.

It wasn’t supposed to be this way.

In 1987, shortly before the Minneapolis Auditorium was razed, the organ was carefully dismantled, catalogued and stored in wooden crates. The plan was to reassemble it inside one of the convention center’s domed exhibition halls. To this day, an elaborate bronze plaque in the building’s lobby thanks people who donated money for “the preservation and reinstallation of the Mighty Kimball organ.”

Instead, its myriad pieces quietly occupy a warren of rooms that were originally intended to house its complicated mechanics.

“It’s ravishingly beautiful, and it has the potential to move hearts and souls with its music, if given half a chance,” said Michael Barone, the host and senior executive producer of “Pipedreams,” which is produced in St. Paul by American Public Media and broadcast on 100 public radio stations nationwide. “It can go from a whisper — something very transparent, like incense — to the roar of a salvo of cannons.”

Money, or a lack thereof, is the thread that runs through the Mighty Kimball’s history.

The Minneapolis Auditorium opened to great fanfare in 1927, hailed by one local business leader as “one of the greatest civic attractions we have.” It was home to concerts, exhibitions, meetings and sporting events — including Minneapolis Lakers basketball games starting in the 1940s.

Shortly before the building opened, a fundraising drive was launched to pay for a grand pipe organ.

“Nothing comparable in size or arrangement has ever been built,” the chair of the city’s organ committee, A. F. Benson, said in 1927.

W. W. Kimball Co. should have demanded a payment-in-full clause on its $100,000 price tag, which approaches $1.6 million in today’s dollars. After paying roughly $26,000 — nearly half of which came from donations by Minneapolis schoolchildren — the city’s finances were flattened by the Depression. Kimball ultimately settled for an additional $24,000 for the largest pipe organ it ever produced, meaning the company collected 50 cents on the dollar.

Everything about the instrument, also known as the “Voice of Minneapolis,” was colossal.

When its components were shipped from Kimball’s Chicago factory, they filled five railroad boxcars and weighed 30 tons. A crew of five took 12 months to complete the installation.

The June 1928 dedication ceremony was preceded by a Nicollet Avenue parade, and 9,000 people attended the first public performance. Two gigantic, showy consoles — one is for theater music, the other is designed for the concert repertoire — are required to take full advantage of the organ’s glories.

It features an astounding 10,000 handmade pipes, ranging in length from a few inches to 32 feet and fashioned from wood, lead, tin and zinc. (By comparison, the Wurlitzer pipe organ at the 6,000-seat Radio City Music Hall in New York City has 4,178 pipes).

But it wasn’t long before the public’s interest in pipe organs waned. Kimball built its last pipe organ in 1942, and the Mighty Kimball didn’t get a lot of post-World War II use. Still, there was a bit of a renaissance in the 1980s, when a fervent group of supporters rallied to save it.

In the late 1980s, nearly $750,000 was spent extricating the Mighty Kimball from the auditorium (the move was dubbed the “Great Minnesota Organ Transplant”) and making it ready for its new home in the convention center.

Of that amount, $488,000 was privately raised through 3,200 donors and a series of benefit concerts, including a gala performance featuring the Minnesota Orchestra.

When the organ’s carefully planned reinstallation began in the early 1990s, however, disaster struck. Cost-conscious city leadership accepted what in hindsight was an absurdly low bid from a well-meaning but inexperienced contractor. Cash quickly evaporated and the city filed — and won — a lawsuit. With just 5% of the organ’s inner workings reinstalled, work halted and was never resumed.

“Out of sight, out of mind,” Barone said.

(Jeff Johnson, the convention center’s executive director, declined the Star Tribune’s request to photograph the organ. “Everything is in storage and does not photograph well,” he replied in an email. “The organ itself was never beautiful or easy to photograph. It was all about the thousands of sounds that it could make not how it looked.”)

Cost projections for resuscitating the Mighty Kimball have escalated. In 1994, it was $1.6 million, and five years later the figure had grown to $2.1 million. Today, Barone estimates that it will take $3 to $5 million to make the “Voice of Minneapolis” sing once again, and another million to maintain the instrument.

An instrument without a home

Barone, a leader of the 1980s campaign to save the organ, said finding a suitable home for the instrument is a major roadblock.

“Installing it in the convention center is a severely compromised decision,” he said. “This truly marvelous instrument is so good that it deserves to be in a place where it can be heard on a regular basis.”

In other words, not an exhibition hall, “Where few clients have, in the back of their mind, an organ prelude or interlude,” Barone said. “Ideally, it would be a space where the public could enjoy it in an effortless way.”

A prime example is the Wanamaker Organ, which anchors the atrium of a historic downtown Philadelphia department store. Its 28,000-plus pipes make it the world’s largest pipe organ, and the building’s current occupant, Macy’s, stages brief concerts for shoppers — twice a day, six days a week.

Over the years, there have been behind-the-scenes campaigns to find a more suitable residence for the Mighty Kimball. Chris Larson, a retired convention center staffer who considered himself the Mighty Kimball’s unofficial keeper, said they tried to make connections and generate some enthusiasm — to no avail.

“There was a theater being restored in Iowa, but ultimately it didn’t sound too good to give the ‘Voice of Minneapolis’ to a city in Iowa,” he added. “Although that’s better than having it sit in storage.”

One of the last recordings of the organ was broadcast on Pipedreams in 1987 and is still available online.

“All you have to do is listen to recordings to realize how special it is,” he said. “I’ve got recordings of it that, if played back on a superb stereo system, will blow your mind.”

Did St. Paul really protect gangsters during the Prohibition era?

How did Dinkytown in Minneapolis get its name?

How many WPA projects were built in Minnesota as part of FDR’s New Deal?

How did Nicollet Island become parkland with private housing on it?

Why is Uptown south of downtown in Minneapolis?